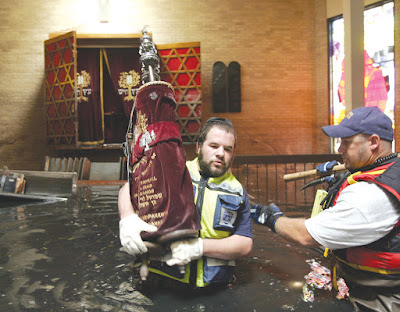 Beth Israel in Lakeview was flooded, and the Torahs later had to be buried with hundreds of other unusable Judaic items

When word came down to evacuate New Orleans in advance of Hurricane Katrina in August 2005, most in the Jewish community figured they would be away for a few days at most.

Instead, the entire community was uprooted as the levees failed and the city was inundated with floodwaters. It took weeks for parts of the city to reopen, and in the parts that did reopen, services were extremely limited. A few days turned into weeks, months — and a large percentage never went back.

Those who returned began a years-long odyssey to rebuild, in the Jewish community and in greater New Orleans. They were joined by a wave of idealists attracted by the idea of helping resurrect a city that is unlike any other in America.

As the 10th anniversary approaches, the Jewish community is holding several programs to look back — and look forward.

The event was co-sponsored by the Jewish Women’s Archive, Hadassah and the National Council of Jewish Women, and included clips from the Archive’s oral history collection, “Katrina’s Jewish Voices.”

In early August, Jewish Family Service of Greater New Orleans hosted a reflection and discussion group for those dealing with stress and emotions connected to the 10th anniversary. Groups were led by Stephanie Crowder, LPC, LMFT and Chenoa Moten, Social Work Intern. JFS was a lead agency in distributing aid and assistance to those in need for months and even years following the storm.

The Jewish community commemoration will be “The New New Orleans: Celebrating Strength and Community,” Aug. 30 at 5 p.m. at the Uptown Jewish Community Center.

The Uptown JCC served as a FEMA staging area for several months after Katrina.

There will be a brief commemoration by the New Orleans Rabbinic Council. Bobby Garon, who was president of the Jewish Federation of Greater New Orleans before Katrina, will speak, as will Allan Bissinger, who became Federation president immediately after Katrina. They will recognize community leaders and professionals who contributed to the rebuilding effort.

After that part of the program, there will be a kosher New Orleans meal, with jambalaya, brisket debris po-boys, Cajun corn and potatoes, and other treats, catered by Kosher Cajun.

Entertainment will be by Sunpie and the Louisiana Sun Spots. Regulars at JazzFest, Sunpie and his band combine the musical styles of Blues, Caribbean, Gospel, Funk, Zydeco and West African rhythms. They call their music “Bouje Bouje,” meaning to move, and it’s tailor-made for dancing.

The event is free and open to the community, sponsored by the 19 local Jewish organizations and synagogues.

As part of the evening, school supplies and other items are being requested for at-risk youth in the community, through the Youth Empowerment Project. A “wish list” is on the JCC and Federation websites.

Beth Israel, the only synagogue in New Orleans that had to completely rebuild after the flood, will have a Katrina at 10 weekend from Aug. 21 to 23. Rabbi Uri Topolosky and family will be visiting from Maryland.

Topolosky arrived in New Orleans the summer of 2007, leaving in mid-2013 to become rabbi of Beth Joshua in Maryland and rav ha-Kehillah at Melvin J. Berman Hebrew Academy, where he is an alumnus.

During his tenure in New Orleans, the congregation met at Gates of Prayer, and also combined with Shir Chadash on programming, drawing international attention as a model of cooperation among Reform, Conservative and Orthodox congregations.

Beth Israel’s new building was dedicated in August 2012, next door to Gates of Prayer.

On Aug. 23, there will be a memorial service at the Beth Israel cemetery at 10 a.m. At 6:30 p.m. there will be a commemorative dinner and presentation, “Ten Years Forward: An Evening of Retrospection and Vision.” Reservations are $54, with sponsorships at $180. A portion of each ticket will be donated to the United Orthodox Synagogues of Houston for flood relief.

Gates of Prayer in Metairie will host a Katrina remembrance at the final joint Reform Shabbat service of the summer, held with Temple Sinai and Touro Synagogue on Aug. 28 at 6:15 p.m.

Sinai Rabbi Edward Cohn will speak about what happened, Gates of Prayer Rabbi Robert Loewy will address the response, and Touro Rabbi Alexis Berk will reflect on where the community is today.

Cantors Joel Colman and David Mintz will be joined by Cantorial Soloist Victoria May in providing music for the evening.

“Katrina’s 10th anniversary will be somewhat like a yahrzeit,” Loewy said. “It will mark a point in time of loss. For many there will be hurt and sadness, as we remember those difficult and challenging times. Yet with the advantage of perspective we can also feel a sense of triumph, knowing that we successfully built upon that experience.”

At B’nai Israel in Baton Rouge, the 10th anniversary will be marked at Shabbat services on Aug. 28 at 6 p.m., with prayers “for those who suffered loss” and gratitude “for the strength and courage to recover.”