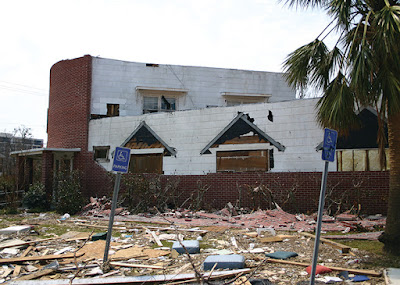 For Brad Kessie, the president of Beth Israel in Gulfport, the Hurricane Katrina 10th anniversary “can come and go as quickly as possible.”

Beth Israel will mark the anniversary at its Aug. 28 Shabbat service. The first part of the service will be held at the congregation’s former location, the corner of Camellia Street and Southern Avenue in Biloxi, at 7 p.m., then proceed to the new location in Gulfport for the rest of the service and a special Oneg.

Storm surge from Katrina flattened structures along the Mississippi coast, often leaving just a concrete slab. Beth Israel was two blocks from the beach, and while the building still stood, much of the brick façade was peeled away and water that flooded in made the building a moldy, unusable mess.

One month later, Rosh Hashanah services were held at Keesler Air Force Base, the first services since the storm. The congregation met at Beauvoir United Methodist Church until a new building — several miles inland in Gulfport — was completed in April 2009.

Kessie said the congregation, Mississippi’s only Conservative congregation, had about 65 members before Katrina. At the time of the dedication, there were about 45 members, currently about 50 families are members.

Many older members passed away soon after Katrina, losing some of the congregation’s institutional memory, but Beth Israel has “more children at this point than we did before, which is exciting.”

The new building has many items rescued from the old building, including the Tree of Life, some of the stained glass windows and the Ten Commandments that hung over the entrance of the old building. “We have enough of the past sprinkled in that we haven’t lost too much of who we were, but at the same time we’re moving forward.”

Many in the congregation lost their homes in Katrina, but after 10 years “everybody has been able to put their lives back together,” Kessie said. “We don’t think much about Katrina any more. It’s there. It’s always in our minds but we don’t talk about it.”