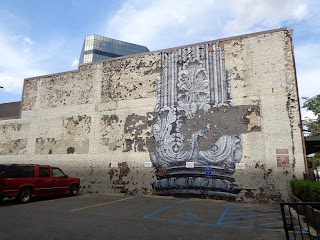 above: mural of the cast iron column on 1874 Kahn Building, Shreveport

Several other Katrina commemorations are planned in New Orleans, including a Beth Israel weekend with the Topoloskys and a community dinner, a joint Reform Shabbat service and a community-wide event at the Uptown JCC.

Beth Israel in Gulfport, whose previous building in Biloxi was damaged beyond repair by Katrina, will have a low-key commemoration on Aug. 28.

At its Aug. 6 meeting, the Birmingham Jewish Federation’s board unanimously voted to oppose the Iran nuclear agreement. The resolution was modeled on one by the Houston Federation.

At the JCC Maccabi Games, New Orleans medaled this year. Competing in Dallas this week, the 16U Boys Basketball team won the bronze medal, defeating Dallas White, 61-46. Australia kept New Orleans out of the championship game, 61-54.

At the Maccabi European Games, a new Guinness world record was set for the largest Shabbat dinner, with 2,322 participants. The previous record was 2,226, set last year in Tel Aviv in an event that had two Birminghamians among the organizers — Natalie Solomon and Victoria Kimerling. The new record has an Alabama connection, as Jarrett Kaplan of Huntsville is on the U.S. basketball Maccabi team.

Rabbi Alexis Berk of Touro Synagogue in New Orleans will receive the Forum for Equality’s Acclaim Award, Sept. 26 at the Westin Canal Place. She will receive the Faith and Equality Award as part of the evening recognizing those who are building a Louisiana of equality.

Aug. 3 was Willie Perry Day in Birmingham. Perry, who died in 1985, was the “Birmingham Batman” who rescued motorists in his Batmobile-decorated Ford Thunderbird in the 1980s. As a remembrance, a Birmingham cab driver posted a piece he wrote in 2013 about how two strangers dressed “a little like Mormons” came to his aid off Overton Road in a rainstorm — they were from Bais Ariel Chabad Center.

The Atlanta Jewish Federation is sponsoring Book It To Shabbat, a PJ Library family Shabbaton at Ramah Darom the weekend of Oct. 16. Registration is open, and you don’t have to be from Atlanta.

A Birmingham teacher reflects on her summer Holocaust symposium in Europe.

Rabbi Scott Hausman-Weiss returns to Birmingham’s Temple Emanu-El on Aug. 14 for the 5:40 p.m. service. Hausman-Weiss is rabbi of Shma Koleinu in Houston.

Knesseth Israel in Birmingham will have a Wake Up to the Shofar welcome back barbecue lunch on Aug. 16. The group will meet at the Ruffner Ball Fields on Ruffner Road, just behind downtown Irondale, at 10 a.m. There will be a hike and the blowing of the first shofar of the year in a natural setting, followed by lunch.

The Cohn Early Childhood Learning Center at the Levite Jewish Community Center in Birmingham is hosting a Pancake and Pajamas breakfast in the LJCC auditorium on Aug. 16 from 8 to 10 a.m. The community is invited to attend — in pajamas.

Birmingham’s Temple Beth-El will have a Swim and Schmooze at the Levite Jewish Community Center, 6 p.m. on Aug. 13.

The next OLLI at Birmingham’s Levite Jewish Community Center will feature William Gantt, founder of the Southern Literary Trail, Aug. 14 at 10:30 a.m. The program is open to the community.

Birmingham’s Temple Beth-El will introduce Shabbat B’Yachad, a new Shabbat service with a breakfast and schmooze at 9 a.m., and a one-hour abbreviated service at 9:30 a.m. It will be family-friendly and interfaith-welcoming. Participants can choose to stay afterward for the rest of the traditional service and luncheon. The first Shabbat B’Yachad will be on Aug. 15.

Mobile’s Springhill Avenue Temple will have Sisterhood Shabbat on Aug. 7 at 6 p.m. The service will be led by members from the Eastern Shore. Services will be followed by an evening of beer, bingo and burritos. Dinner is free, bingo cards are $1.

The Men’s Club at Temple Beth Or in Montgomery will have Biscuits Day at the ballpark, Aug. 9 at 5:30 p.m., in the Aronov suite. Reservations are required, and are $15.

The eighth annual Temple Beth-El Poker Tournament in Pensacola will be on August 15. The event will be held at a different venue than what was on the original announcement (contact the office for details). Doors will open at 5:15 p.m. and no-limit hold’em play begins at 6 p.m. The buy-in is $100 for the first 100 who pre-register, or $110 at the door. Re-buys of $100 are taken until 8 p.m. Registration and re-buys are for $3,000 in chips, and there will be a one-time add-on of $5,000 in chips at 8:15 p.m. for $100. There will be free food and a cash bar. The top nine players will receive non-monetary prizes, with first place being a Large Green Egg and second place being a flat-screen television.

Beth Shalom in Fort Walton will have an Evening of Rejuvenation and Reflection, music to set the tone for the High Holy Day season, on Aug. 8 at 7 p.m.

The annual Harriet Wainer Kugler Memorial Mah Jongg Tournament will be held at the Uptown Jewish Community Center in New Orleans on Aug. 16. The event begins with a jazz brunch featuring the Dave Boswell Trio. The two-round tournament follows, with open seating. Participants can register individually or may bring their entire game. Both rounds of play will be played in place, without rotating seats. Registration for the tournament is $35. Tournament prizes and door prizes will be awarded.

The Jewish Federation of Greater Baton Rouge will have its End of Summer Pool Party on Aug. 16 at the Bocage Racquet Club, from noon to 2 p.m.

Beth Israel in Metairie will have guest speakers for the next two weeks. Allison Padilla-Goodman, ADL regional director, will speak about the ADL’s regional programming on Aug. 8. Rebecca Gerbert, Southwest Regional Synagogue Initiative Deputy Director of AIPAC, will discuss AIPAC’s position on the Iran nuclear deal on Aug. 15. The talks will be at the Kiddush following the 9 a.m. service.

New Orleans Hadassah will have a New Members and Associates Celebration wine and cheese party, Aug. 16 from 3 to 5 p.m. A guest speaker from the American Cheese Society will give advice. Reservations are $36 and limited to the first 40 who respond.

Project Talmud Summer 2015 will be at the Uptown Chabad in New Orleans on Aug. 20 at 7 p.m. The theme will be perspectives on teshuva, with a talk by Rabbi Zelig Rivkin, then a “rookie symposium” of new shluchim for Tulane, Baton Rouge and Mississippi, followed by the music of Teshuva. There will be a dessert buffet. The event is free and open to the community.

Touro Synagogue Rabbi Alexis Berk will lead weekly meditative walks through Audubon Park on Wednesdays throughout Elul, from Aug. 19 to Sept. 9. Meet at the St. Charles entrance at 8 a.m. Dogs and strollers are welcome.

B’nai Israel in Baton Rouge will have its Trash and Treasure Sale through August 14.

Aug. 7 is the first Family Fun Shabbat at Beth Israel in Gulfport. Services will be at an earlier 6:30 p.m.