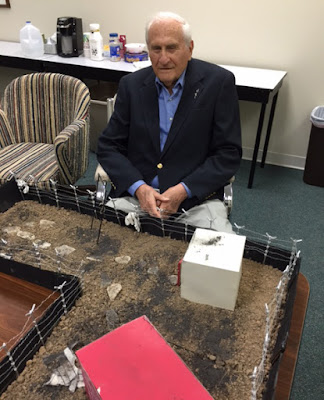 Holocaust survivor Max Steinmetz of Birmingham next to a model of Auschwitz that students from Fultondale High School made (story below).

The Birmingham Holocaust Education Center’s second annual L’Chaim gala will mark 70 years since the liberation of Europe, and honor Brenda and Fred Friedman for their support of BHEC.

“Honoring Holocaust Educators” will present innovative ways teachers are doing Holocaust education in classrooms around the state. The Friedmans will be recognized for funding scholarships for Alabama teachers to attend advanced training programs and seminars in New York, Washington, Europe and Israel.

The event will be Aug. 23 at 2:30 p.m., at the Dorothy Jemison Day Theatre at the Alabama School of Fine Arts.

The keynote speaker will be Gen. Charles Krulak, who recently retired as president of Birmingham-Southern College. Krulak was Commandant of the U.S. Marines and a former member of the Joint Chiefs of Staff. After some time in the business world, he became president of Birmingham-Southern at a time when the college was reeling from a financial crisis. He took no salary and lived with students in one of the dorms.

Last month, he also became leader of a Birmingham Jewish Federation initiative, “A Time to Respond,” a mentoring, leadership training program in Israel advocacy and combatting anti-Semitism, especially on campuses across the region.

Krulak has developed close ties with the Birmingham Jewish community, and his paternal grandfather was Jewish.

Recently, Krulak wrote “I have visited several of the extermination camps and have seen, first hand, the machinery of mass death. As a Christian, what I saw was hugely impactful.”

The program will include a dramatic reading of “What We Saw: In The Words of the Liberators.” The piece is written by Deborah Layman, who wrote last year’s presentation “Slippery Slope.” The piece is based on first-person accounts of concentration camp liberators from Alabama — George Mitnick of Jasper and Travis Ray Carter of Gravel Springs, near Hamilton.

The reading by members of The Seasoned Performers will include music by Alan Goldspiel and Cantor Jessica Roskin.

There will also be performances by local recording artist Gabriel Tajeu and the Birmingham Community Mass Choir. A dessert reception will follow.

Tickets are $50, $25 for students, and are available online at lchaim.swellgives.com.

After meeting local Holocaust survivor Max Steinmetz, four students from Fultondale High School near Birmingham — Kynslee Cummings, Kayla Oden, Nicole Ridley, and DeAnna Talley — were inspired to build a model of a concentration camp based on Steinmetz’s experiences at Auschwitz.

Their teacher, Chris Campbell, is a member of the Birmingham Holocaust Education Center’s Teacher Cadre and has been a recipient of the BHEC Friedman Scholarship Program. He brings his class to the BHEC office each year on a field trip.

The students built the model outside of class as their own project, not as an assignment or for class credit. They gave it to Campbell at the end of the school year and told him they wanted to donate it to BHEC, where it will be displayed.