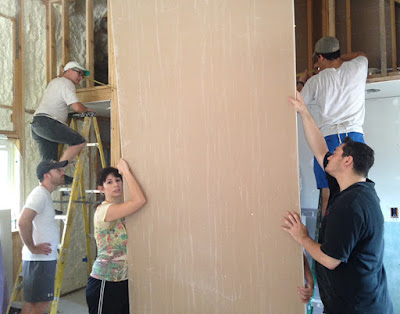 Ten years after the levees broke, the recovery effort still continues in parts of New Orleans.

Despite an excessive heat warning, about 60 members of the New Orleans Jewish community got up early on Aug. 9 to spend the day working on rebuilding four homes with the St. Bernard Project.

TikkuNOLAm was coordinated by the Jewish Federation of Greater New Orleans as a day of community service with the 10th anniversary of Hurricane Katrina approaching.

Liz McCartney, who co-founded St. Bernard Project with Zack Rosenberg, said they have completed 604 homes since they came to New Orleans nine and one-half years ago “to volunteer for a couple of weeks. And here we are.”

They founded the organization in August 2007. “Our goal is not only to finish the job in New Orleans, but to make sure there is no other community that 10 years after a disaster is still trying to recover,” she said.

To that end, in addition to the 80,000 volunteers they have had in New Orleans, the project is also in New York and New Jersey working on Hurricane Sandy recovery, has rebuilt 200 homes in Joplin, Mo., following tornadoes there, and is now working on flood recovery in Texas.

The need is still great, explained Carol Ramm-Gramenz, in neighborhoods that tourists never see. “We get calls every day,” and with the 10th anniversary coming up, people who had given up hope of having their homes repaired are inspired by stories of the groups that are still out there, working to rebuild.

Some of the clients have homes that are partially rebuilt, with progress halted when the clients ran out of money. Some are living without working plumbing or electricity, or living with hazardous mold. There are also those who want to return to the city but still haven’t been able to rebuild.

The day was co-chaired by Peter Seltzer and Julie Wise Oreck. Oreck, who was sidelined by a foot injury, called the day “a perfect example of rebuilding.”

Seltzer, a paramedic, spoke about how he was in New Orleans when Katrina hit “and saw what the storm did to my city.”

He ended up in Philadelphia, knowing that he would return to New Orleans. “I always felt I had a responsibility to come back and do this type of work,” he said.

Patricia, a client of the project whose home in the Lower 9th Ward was completed earlier this year, said the project is “a gift that keeps on giving,” especially for someone like her who is in a wheelchair from a traumatic car accident after Katrina. “The city was trying to take my property,” she said, but St. Bernard Project got everything figured out and “the next week they were building my home.”

Many of the volunteers were relative newcomers, but some were veterans of the storm. Saying “we’re all part of this,” Karen Remer related that her Uptown home was not livable until December 2005, but they remained in Maryland for the rest of the school year, returning in the summer of 2006.

Other volunteers came from the ranks of Tulane students or JNOLA members. Ivy Cohen, director of youth engagement with JewCCY, had hoped to bring some of her teens, but the project was limited to ages 16 and up.

Most of the work for the sweaty day was hanging drywall, after a brief tutorial on measuring, cutting and the proper technique for the power screwdrivers.

Three of the homes are on St. Roch Avenue, with a fourth home that is closer to completion on Louisa Street. 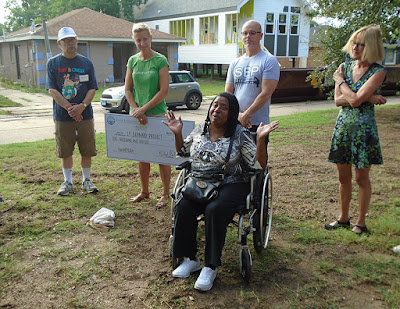 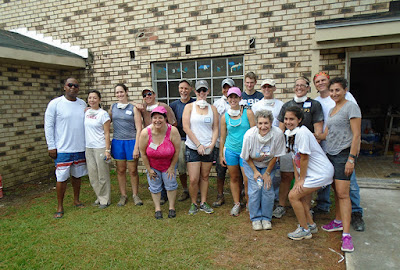