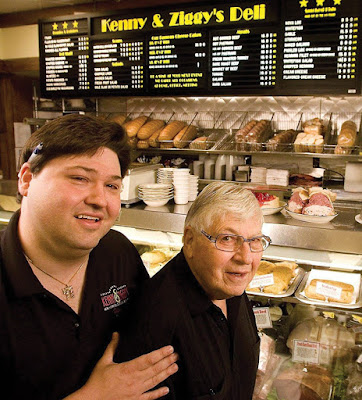 The Sidewalk Film Festival in Birmingham is showcasing a film this month that is guaranteed to leave audiences hungry.

“Deli Man,” which explores the shrinking world of Jewish delis, is slated for two screenings at the world-renowned festival.

“Deli Man” is the third in a series of Jewish cultural documentaries by Erik Greenberg Anjou, following “A Cantor’s Tale” and “The Klezmatics — On Holy Ground.”

It is estimated that there are no more than 150 classic Jewish delis in the country. In the last 85 years, the number of listed kosher delis in New York’s five boroughs has gone from 1,550 to about 21 — the latter figure including the non-kosher ones.

Gruber, who grew up in the deli world, opened Kenny & Ziggy’s 15 years ago. A few years ago, Anjou stopped by for a meal and started chatting with Gruber about delis.

About a year and a half later, Anjou contacted him and spoke about making a movie about Jewish delis and asked Gruber to participate.

Gruber, who had seen one of Anjou’s previous films, figured it would be about kosher deli traditions and was surprised to find that it focused mostly on him. He asked Anjou about it, and was told that he was the biggest character in the industry.

Anjou will speak at the Aug. 30 Sidewalk screening, which is 7:45 p.m. at the Alabama School of Fine Arts Recital Hall. An additional screening will be at noon on Aug. 29, at the Birmingham Museum of Art.

Gruber said the film is “very positive for not just the deli industry, but for Yiddishkeit in general.”

He said the Jewish community needs to embrace and support “our culture and our history” and not take it for granted.

Since the film was released in February, Gruber has made numerous appearances across the country. Some JCCs are flying him out for screenings, and in October he will be at the JCC in Memphis. On Nov. 7 he will speak at the Nashville Jewish Film Festival at a “Deli Man” screening — and deli dinner.

The DVD was released in early July and it is also available on streaming services.

“We’re doing the best we can” to continue this Jewish culinary legacy, Gruber said. Those in the deli business “are all of the same mindset, trying to perpetuate this.”

The industry has numerous challenges, some of which are true of all types of restaurants. Rising costs from Obamacare and skyrocketing food prices are but two of the issues making it “more difficult for delis to operate.”

Recently, he said, food costs have gone up 30 percent per year. In March, the New York Times reported that brisket prices went up 47 percent since 2013, and was already up 14 percent in the first three months of 2015.

Gruber doesn’t have to look far to know why. A tight beef supply, brought on by drought in Texas, is seen as the primary cause. Recent rains helped, but won’t be reflected in lower wholesale prices for another year.

“People want to know, why am I paying $15.95 for a pastrami sandwich. This is the reason why,” Gruber said.

The 300-seat deli has an extensive menu, from the standard corned beef and pastrami to kreplach, kishka, Ukrainian meatballs, chopped liver, whitefish salad, borscht and matzah ball soup. Naturally, the portions are huge, as befitting a New York deli — or an establishment in a state that claims everything is bigger there.

A large number of the specialties can be ordered online and shipped throughout the country.

In February, Gruber did a deli event at B’nai Israel in Baton Rouge, and another is in the works for next year. His wife, Mimi, is from Baton Rouge and they were married in 2013 at the Dohany Synagogue in Budapest, where his grandfather, Max, had his Bar Mitzvah ceremony, and where 50 of his relatives’ names are on a Holocaust memorial.

In the early 1900s, Max Gruber immigrated to New York from Budapest and worked in several delis. In 1927 he and his brothers-in-law opened the Rialto, the first deli on Broadway. They followed with Berger’s on 47th, Wally’s Downtown and the Griddle on 16th.

Gruber’s father, Eugene, started in the business at age 12 and later opened Genard’s on Madison Avenue.

By the time Gruber was 8, the family had moved to Spring Valley, N.Y., where his father and uncle had the Cresthill Kosher Deli. His grandfather threw an apron at him, and he started learning the deli business — and learned Yiddish. After his grandfather died, Gruber entered the Cordon Bleu in London, rising to the top of the class. While he enjoyed cooking in three-star Michelin restaurants for a couple of years, and cooked for Queen Elizabeth, his heart was in New York.

He accompanied his father to the Delicatessen Dealers Association of Greater New York annual dinner, which was attended by a small number of men in their 60s and 70s. Wondering who would continue the legacy, he went to his father and uncle the next day and said he was leaving the fancy restaurants behind and coming back to the deli business. He returned to the Cresthill, running it with his father.

In the early 1990s he opened Ziggy G’s on Sunset Boulevard in Los Angeles, attracting numerous stars as regulars. In 1999, he was approached by former Carnegie Deli owner Freddy Klein with the opportunity to partner with Kenny Friedman on bringing New York deli food to Houston, where Kenny’s father, Lenny, grew up. Since then, Kenny & Ziggy’s has been a taste of New York in Texas.