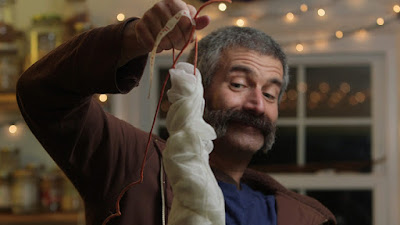 Sandorkraut, which will be screened on Aug. 29

“Do You Believe In Love” is a documentary directed by Israeli Dan Wasserman and produced by Barak Heymann. It centers on a matchmaker named Tova, who is paralyzed because of muscular dystrophy, but she has had great success finding perfect matches for people with disabilities.

People flock to her apartment in Israel where her husband, daughter and housekeeper weigh in as she divines matches. Tova offers a tough-love approach but her passion for her work is undeniable. The film is described as “funny, heartwarming and endlessly entertaining.”

Wasserman said he met Tova more than 10 years ago while working as a journalist on a story about the rights of the disabled. This is the first documentary film he has made, and it has been screened at numerous Jewish film festivals around the world. It will be at the ASFA Black Box Theater on Aug. 29 at 1:35 p.m.

“Hers is a very interesting story that I am happy to be able to tell through film,” said Wasserman, a native of Haifa who still lives in the Mount Carmel section of the city. “She tells her clients she doesn’t believe in love, but it was easy to see the love she shared with her husband and all the people she matched up who found love.”

He said there were some challenges to making his first film, but he culled upon his journalism experience to hash it out. “I am lucky to have an experienced producer in Barak to guide me and to distribute and promote the film,” said Wasserman. “You could say this was a labor of love for me.”

His next film will be a documentary that explores dying and how humor can help people to cope, called “The Last Lesson.”

Also featured at Sidewalk will be Jewish filmmaker Nathan Silver’s latest narrative feature “Stinking Heaven,” at the ASFA Lecture Hall, Aug. 29 at 3:45 p.m. Set in the early 1990s and shot on lo-fi video of the era, this raw ensemble piece goes inside the walls of a suburban safe house for recovering addicts, where rituals and reenactments serve as group therapy and residents share a boundless intimacy.

When the arrival of a mysterious new member disrupts order at the commune, the ever-encroaching handheld camera bears witness to its turbulent demise.

This is Silver’s sixth film. His “Uncertain Terms” made it into Sidewalk in 2014, and his mother won an acting award for her appearance in it.

His parents’ experiences on an ashram in update New York in the 1960s influenced the idea for “Stinking Heaven.”

“There is something unique about that communal living and the variants that go into it. I wanted to do something that showed people with ideals and how they deal with those ideals getting crushed. It is like things are every day, even if their daily living environments wouldn’t be classified as normal,” said Silver, 32, who is originally from Massachusetts.

Silver wanted to be a poet and spent a year in France before realizing he could best pursue his education, career and dreams in the U.S. He started out at New York University learning to be a playwright until a professor recommended he go into screenwriting. “I wrote, directed and produced my first film just after graduating from NYU and haven’t looked back.”

“Sandorkraut” will be part of the Saturday Doc Shorts, one of nine short documentaries that will be screened on Aug. 29 at 1:55 p.m. at the Alabama School of Fine Arts Recital Hall.

Directed by Ann Husaini and Emily Lobsenz, “Sandorkraut” is an intimate portrait of Sandor Katz, a famous food author and fermentation guru who became obsessed with fermentation when a health crisis led him to move to an off-the-grid commune. He describes himself as a “queer Jew born and raised in New York City who has been homesteading in rural Tennessee” east of Murfreesboro since 1993.

Katz considers fermentation “largely an act of faith” infused with spirituality, noting the Jewish practice of blessing wine, “the fermented symbol of the brilliance of creation.” He started on this path through sauerkraut, which “tasted so alive and powerfully nutritious.” He also considers fermentation part of his healing as he lives with AIDS.

His 2012 book, “The Art of Fermentation,” won a James Beard Award, and the Southern Foodways Alliance gave him the Craig Claiborne Lifetime Achievement Award.