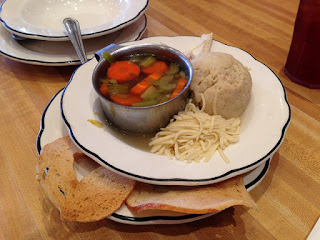 above: matzoh ball soup at Kenny and Ziggy’s in Houston.  ‘Deli Man’ featuring Ziggy Gruber will be one of the documentaries screened at the upcoming Sidewalk Film Festival.

This weekend, commemorations of Katrina’s 10th anniversary start hitting the calendar. Several Katrina commemorations are planned in New Orleans, including a Beth Israel weekend with the Topoloskys and a community dinner on Aug. 23, a joint Reform Shabbat service on Aug. 28 and a community-wide event at the Uptown JCC on Aug. 30, with a collection of items for the Youth Empowerment Project. At Jewish Community Day School in Metairie today, Rabbi Topolosky led a Shabbat Train with the students.

Rabbi Edward Cohn of Temple Sinai in New Orleans will be the principal speaker at the Interfaith Prayer Service commemorating the 10th anniversary of Katrina’s landfall, Aug. 24 at 7 p.m. at St. Louis Cathedral.

Beth Israel in Gulfport, whose previous building in Biloxi was damaged beyond repair by Katrina, will have a low-key commemoration on Aug. 28, starting at the site of its previous building.

Nationally, many places have done articles marking the anniversary. Here are the JTA articles about New Orleans and the Mississippi Coast. Meanwhile, Chabad did several pieces, including two rabbis who went into New Orleans immediately after the storm, how Jewish New Orleans keeps getting younger, and new Chabad personnel at Tulane and in Baton Rouge.

Hearing from Congress: In Mobile, Rep. Bradley Byrne will speak about his trip to Israel this week, at Springhill Avenue Temple on Aug. 23 at 2 p.m. Beth Israel in Metairie will hear from Rep. Cedric Richmond, who will discuss his thoughts on the Iran nuclear deal on Aug. 31 at 7 p.m.

Rep. Steve Cohen of Memphis said he will vote in favor of the Iran nuclear deal.

Rep. Alcee Hastings, a Florida Democrat, will vote against the Iran deal, and explains why.

This weekend is the Sidewalk Film Festival in Birmingham, and “Deli Man” is among the several Jewish-themed films on the schedule. The “Deli Man” screenings are sponsored by Southern Jewish Life, and here is a profile of the film’s main subject, Ziggy Gruber of Houston’s Kenny and Ziggy’s.

Many New Orleans rabbis sign a clergy statement urging the city to remove four Confederate monuments in the city.

The Atlanta Jewish Federation is sponsoring Book It To Shabbat, a PJ Library family Shabbaton at Ramah Darom the weekend of Oct. 16. Registration is open, and you don’t have to be from Atlanta.

A Jerusalem Post report about a budgetary battle over cuts at Israel’s Foreign Ministry states that the Atlanta consulate, along with Philadelphia and San Francisco, could be closed.

To get the conversation going, a store in Macon replaced its Confederate flag with a Nazi flag.

Chloe Valdary blasted a group of 1,000 civil rights activists, including many in the Black Lives Matter movement, who issued a statement connecting the Palestinian struggle to the struggles of blacks in the U.S. and endorsed the BDS movement.

Kosher Food and Wine Atlanta will be held on Aug. 27 from 7 to 10 p.m. at the historic Georgia Railroad Freight Depot.

The Birmingham Holocaust Education Center will have its L’Chaim event on Aug. 23, recognizing Holocaust educators in the area and honoring Brenda and Fred Friedman.

Bloom Hillel at the University of Alabama will have a Welcome Back Barbecue and Patio Party, Aug. 23 at noon. There will be games and prizes, with live music by the Voodoo Saints.

Jamie Gellar, author of a series of kosher cookbooks and founder of the Kosher Media Network, will be in Birmingham for a kosher cooking show at the Winn-Dixie on Montevallo Road, Sept. 1 at 5:30 p.m.

Auburn Hillel’s Back to School Bagel Brunch is Aug. 23 from 1 to 3 p.m. at Beth Shalom.

The L’Chayim League will have a summer champagne luncheon on Aug. 30 at 12:30 p.m. at Temple Beth Or in Montgomery to celebrate its 30th anniversary. Musicians Kurt McKinney and Barbara Blanks will entertain. Reservations are $16 by Aug. 23.

Jewish Learning Institute has a new six-part course, “Judaism Decoded: The Origins and Evolution of Jewish Tradition.” It starts at Bais Ariel Chabad Center in Birmingham on Aug. 26, meeting on Wednesdays at 7:30 p.m., or at 12:30 p.m. Thursdays starting Aug. 27.

“Beatles and Boomers: Planning for When I’m 64” will be held at Birmingham’s Temple Emanu-El on Sept. 2 at 5 p.m. The Grafman Legacy Seminar features Martin Shenkman, a nationally-recognized estate planner, sharing best practices. The seminar is for all ages, and will kick off with cocktails and a few Beatles tunes to set the mood. $5 per person requested at the door. Reserve by Aug. 31 to the Endowment Office.

The Sisterhood at Temple Beth Or in Montgomery is reopening its gift shop with a wine and cheese reception on Aug. 28 at 5 p.m., before Shabbat services. Raffle tickets will be given to customers for every $10 spent.

On Aug. 28, Birmingham’s Independent Presbyterian Church is hosting an Oneg Shabbat as part of its centennial celebration. The oneg will follow the 5:40 p.m. service at Temple Emanu-El. The church’s centennial committee stated it is to recognize that the church’s history began in 1915 in Emanu-El’s sanctuary. “We could not have done it without our friends in faith at Temple Emanu-El.”
Chabad of Alabama will have a Persian Shabbat on Aug. 21. Services will be at 6:30 p.m., followed by a Persian cuisine Shabbat dinner. Reservations here.

The next Nite on the Town for Beth Shalom in Fort Walton Beach will be on Aug. 29 at 5:45 p.m. at Joey’s Italian Grill and Bar in Niceville. Reservations are requested by Aug. 26.

The Pensacola Jewish Federation will welcome new Shlicha Tal Izhakov with a potluck dinner, swimming and Havdalah party Aug. 29 at 6 p.m. – contact the Federation for location and details

Chabad of the Emerald Coast will have a Shofar Factory on Aug. 23 at 11 a.m.

The Aug. 21 joint Reform Shabbat service at Gates of Prayer in Metairie will be an Unplugged Shabbat with Kol Simcha and a potluck dinner. After the acoustic service, participants are asked to bring a main course, vegetable, salad, appetizer or casserole for 10, and let the office know in advance what will be brought. The service will be at 6:15 p.m.

The Jacob Rader Marcus Center of the American Jewish Archives will have a Travels in American Jewish History tour of New Orleans, Aug. 26 to 30. Featured speakers include Gary Zola, Stuart Rockoff and Michael Cohen.

Jewish Babies Club at Metairie’s Jewish Community Day School returns on Aug. 28 at 1 p.m. Deborah Mintz will lead a Shabbat sing-a-long, with dancing and musical instruments. Jewish Babies Club is a free program open to parents and their children, one month to three years of age.

Jewish Family Service of Greater New Orleans announced three sessions in its Fall Continuing Education workshop series. Each workshop has been approved for 3 General Continuing Education hours by the LCA and for 3 Diagnosis hours by the LABSWE, and all sessions will be held at Beth Israel in Metairie. On Aug. 28, Erin Dugan will present “Discovering Child-Parent Relationships: Enhancing, Engaging, and Empowering Parents to Discover New Techniques.” On Oct. 23, Leslie Todd will present “Left to Their Own Devices: The Prevalence of Gaming, Sex and Social Media as Behavioral Addictions,” and on Nov. 20, Marvin Clifford and Helen Stavros will present “Integrating DBT Skills into Clinical Practice.” All sessions run from 8:45 a.m. to noon. Pre-registration up to the day before is $60 for one event, $110 for two and $160 for all three. Day-of registration is $70.

Jewish Community Day School in Metairie will have its Welcoming Guests Shabbat dinner on Aug. 28 at 5 p.m. to kick off Homecoming 20. Reservations are requested.

Anshe Sfard in New Orleans will have its next Young Jieux-ish Adult Shabbat dinner on Aug. 21. Services will be at 7 p.m., followed by dinner at 8 p.m.

Shir Chadash in Metairie is having a new member Shabbat. There will be a dinner following the Aug. 21 6:15 p.m. service, and a special Kiddush lunch following the Aug. 22 service. The dinner is $12 for ages 6 and up, with a maximum of $40 for a family.

B’nai Israel in Baton Rouge will have an open house and Sunday brunch on Aug. 23 from 11 a.m. to 1 p.m., for members and those who might be interested in membership.

The annual Introduction to Basic Judaism class at Temple Sinai in New Orleans will kick off on Aug. 23. Rabbi Edward Cohn teaches the 20 informal 75-minute classes on Sundays at 9 a.m. There is no charge, and the classes are open to anyone interested in exploring Judaism, including interfaith couples, those considering conversion, and Jews who are looking for a refresher into the faith of their birth. Classes will include Jewish theology, prayer, holiday observances and life cycle rituals. Registration is requested through the Temple Sinai office.

New Orleans Hadassah is changing things up for this year’s major fundraiser. Last year, BraVeaux raised over $55,000 for breast cancer research at Hadassah Hospital. This year’s event will be the Mad Hatter’s Hadassah Tea Party, a champagne jazz brunch on Oct. 18 at 11 a.m. at the Pavilion of the Two Sisters at City Park. A Mad Hatter Build a Hat program will be at the Jewish Community Campus in Metairie on Aug. 30 from 11 a.m. to 4 p.m., changed from the original date of Aug. 23.

Gates of Prayer in Metairie will have a blood drive with Ochsner Blood Bank on Aug. 23 from 9 a.m. to 1 p.m. All Ochsner blood donors will be entered into a drawing for two plaza level tickets to a New Orleans Saints home game.

Touro Synagogue Rabbi Alexis Berk will lead weekly meditative walks through Audubon Park on Wednesdays throughout Elul, from Aug. 19 to Sept. 9. Meet at the St. Charles entrance at 8 a.m. Dogs and strollers are welcome.

Christians United for Israel will have a Standing with Israel event at Jubilee Revival Center in Vicksburg on Aug. 25 at 6 p.m. Pastor Lyndon Allen, CUFI Central Region Coordinator, will be the guest speaker.

Beth Israel in Gulfport will have a general membership meeting and dinner on Aug. 23 at 4:30 p.m., with guest speaker Samantha Dubrinsky, director of community impact and special projects at the Birmingham Jewish Federation. In the last few months she was on a Jewish Agency solidarity trip to France after the Charlie Hebdo attack, and recently was on a fact-finding trip to Ukraine’s Jewish community.

The B’nai Israel Sisterhood in Columbus is hosting a Welcome Back Pot Luck Luncheon on Aug. 30 at 12:30 p.m. for Temple members, Hillel students and anyone on their email list.  All of those who attend are asked to bring a dish, salad, fruit salad, breads, beverages, deserts, etc.

Members of Beth Israel in Gulfport will check out the new MGM Park with an outing to see the Biloxi Shuckers play, Aug. 24 at 6:40 p.m. The group will meet out front at 6 p.m.

Beth Israel Sisterhood in Jackson will have its annual brunch, Aug. 23 at 10 a.m. – contact the office for location and details.