Rising from the Holocaust, Three Brothers deliver a sweet legacy in Houston 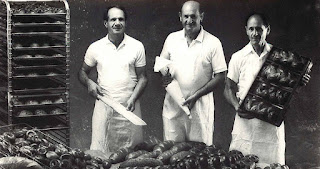 While Three Brothers Bakery is a fifth-generation family business going back 190 years, most of its history hasn’t been in Houston — it was a history interrupted by the Holocaust.

On May 8, 1945, the brothers were liberated from Waldenburg concentration camp, and exactly four years to the day after that, Three Brothers opened on Holman Street in Houston, relocating to its current Braeswood location in 1960.

The family business began in Chrzanow, Poland, around 1825 in a building where Naploeon had spent the night. Bobby Jucker, the son of Sigmund and the fifth generation owner of Three Brothers, said his family wasn’t in the building when Napoleon was there, “but that was their claim to fame.”

The Polish bakery was last known as Morris Jucker’s Bakery. In 1932, when Sigmund and Sol were 10, they went to work in the bakery because of a bakers’ strike.

When the Germans came in 1939, the brothers hid in the floor of a house for months, then Sigmund escaped to Russia, finding work with a baker. His family called on him to return, which he did, just before Jews were rounded up for execution in that Russian town.

A few weeks later, the Juckers were taken by the Nazis. The parents were sent to Auschwitz, where they died, and the siblings were assigned to work camps. Sigmund bribed a soldier to get them into a “better” camp. He made the rounds of eight camps before his sister, Jeannie, managed to get all four of them into the same work camp.

On Liberation Day, seeing that the guards had fled in advance of Russian troops, Sigmund cut the wires on the gate.

After liberation, they were in a repatriation camp for a year, baking for the U.S. Army. Jeannie married and moved to Houston. The brothers “were supposed to go to Colorado Springs and my aunt said no, come to Houston” and got them sponsorships to move there, Bobby said.

The brothers worked briefly for the Henke & Pillot grocery store, but “they said ‘we can do this ourselves’,” and opened their own bakery. “It’s all they knew,” Bobby said, and they “made it into a viable business” themselves — it was 1968 when they hired their first employee.

At first they did what they knew in Poland — challah, rye bread, pumpernickel, bagels, bialys, hamantaschen. With American preferences for sweeter things, cakes, cookies and pies eventually followed.

Today, they are also known for wedding and birthday cakes, and even “extreme cakes.”

Many of the recipes used at Three Brothers date back to the beginning in Poland, especially the challah and other breads. Their gingerbread is a recipe that was modified in 1960.

The four siblings had 10 children, most of whom worked in the bakery. Bobby became the bakery’s next generation after unsuccessfully seeking a career in petroleum at a time when the oil industry in Texas went bust.

He and wife Janice met at a BBYO regional event in high school, but married in their late 30s. They run the business now, with their Aunt Estelle, Sol’s wife. Sigmund, the last surviving brother, now 93, comes in every week for lunch and to visit.

Hurricane Ike took the roof off the bakery in 2008, prompting a major repair and renovation that shut the store down for 10 months, though the employees were paid during that time. With Ike hitting two weeks before the High Holy Days, that caused a major shortage of round challahs as their planned run of 3,000 was out of the picture.

The sudden shortage was front page news in Houston. “We had no idea we were such a staple for the Jewish community in Houston,” Bobby remarked.

The store also flooded in 2001 during Tropical Storm Allison, and again in the Memorial Day flood this year. The 2001 and 2008 storms are the only times since 1949 that they have had to “restart our sour” that is used in the rye and French breads.

While the bakery’s roots may be two centuries old, it has been modernizing in recent years. In 2010 Country Living said Three Brothers had the “best mail-order pecan pie America has to offer.” Many of its items are available for shipping.

Janice recently wrote a piece about the importance of using Pinterest and other forms of social media to promote business.

A second location opened in the Memorial area in 2012. In March 2014, they opened a third location, on Washington Avenue. This location introduced a dessert and coffee bar and a patio, and made-to-order cake parfaits. Additional locations are being planned, perhaps in other areas of Texas.

The original location in Braeswood is certified by the Houston Kashruth Association, the other two are not.

Food Network has featured their Pumpecapple Piecake on “Outrageous Food” and they competed in the “Food Network Challenge: Extreme Pirate Cakes.”

The Pumpecapple Piecake is called the Turducken of baked goods. It has three layers — a pumpkin pie baked into a pumpkin spice cake, a pecan pie inside a chocolate cake and an apple pie inside a spice cake. The finished creation is 11 inches tall and weighs almost 24 pounds.