Not a Katrina “victim,” Beth Israel celebrates renewal in Metairie 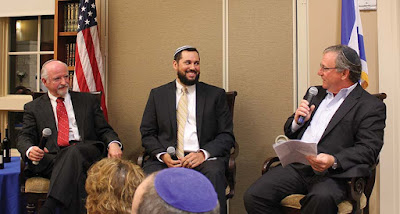 While Beth Israel became the symbol worldwide for the devastation affecting the New Orleans Jewish community when the levees broke following Hurricane Katrina, the message from its 10th anniversary weekend was that it should not be considered the “victim synagogue.”

While every Jewish institution was affected by the flood, Beth Israel was one of only two institutions in Greater New Orleans that had to rebuild completely, and the only one that moved to a new location.

After the levees broke, Lakeview was one of the harder-hit areas, and Beth Israel had at least 10 feet of water inside the building.

Photos of the congregation’s ruined Torahs being removed from the ark in a sanctuary that still had chest-deep water ran in just about every Jewish newspaper following the flood, and became iconic images of the storm’s effect.

Eddie Gothard, past president of Beth Israel, said it wasn’t an easy decision to have the commemoration weekend. Many thought there should not be a weekend revisiting the storm, and it couldn’t be considered a celebration, especially given the death of the congregation’s long-time gabbai, Meyer Lachoff, during the storm.

But, he said, “we are the shul that survived Katrina. We understand the moral imperative to remember.”

Bradley Bain, president of Beth Israel, said the weekend was to reflect on the last 10 years, but also to “celebrate our accomplishments as a community,” and “to look at the next chapter we will write together, 10 years forward.”

Eddie Gothard noted that the congregation is stronger than it was 10 years ago. In his 30 years on the board, balanced budgets were a dream, but since 2006 it has been a reality each year.

Today, “no one has a conversation any more about if we will survive,” and the congregation is attracting newcomers who wouldn’t be there “if we were that pathetic remnant.”

It was noted that four Beth Israel representatives were interviewed for the JTA national wire service piece about Katrina — and three of them arrived in New Orleans after the storm.

Soon after the waters receded, Beth Israel began holding services at Gates of Prayer in Metairie.

Gates of Prayer Rabbi Robert Loewy admitted his “inner Orthodox Jew” never existed as he is a life-long Reform Jew, but he always has believed that a Jewish community should have Reform, Conservative and Orthodox elements. When Beth Israel’s then-president Jackie Gothard inquired about Beth Israel holding services at Gates of Prayer, Loewy said “that’s cool.”

When Gates of Prayer built its second social hall, which Beth Israel used, they had installed an ark in the room. Jackie Gothard asked Loewy why they had done that, and Loewy did not have any idea why. “We looked at each other. We knew.”

In 2007, Beth Israel hired Rabbi Uri Topolosky. The Topoloskys left in 2013, but returned to New Orleans for the anniversary weekend.

The relationship between the congregations grew, and in 2009 Beth Israel decided its new building would be next door to Gates of Prayer, on land purchased from the Reform congregation.

Groundbreaking took place in 2010, and the building was dedicated in August 2012.

The Beth Israel history video that debuted at the building dedication was screened during the gala, and a multimedia presentation on “Our Past to Our Present” was narrated by Jackie Gothard and Lee Kansas.

A procession from Gates of Prayer to Beth Israel included five Torahs that had been donated by individuals and groups across the country, to replace the seven that had been ruined in the flood.

The morning of Aug. 23, Beth Israel Rabbi Gabe Greenberg led a Torah study session at the Beth Israel cemetery, right by where the seven Torahs are buried. Two weeks after the levee breach, Rabbi Isaac Leider of ZAKA made his way to the still-flooded building and removed the scrolls.

Leider transported them out by boat, and congregational secretary Becky Heggelund met him at Zephyr Field to claim the scrolls and bury them in her backyard with the help of a neighbor. The congregation later recognized her as a Righteous Gentile.

Months later, the scrolls were reburied in a single plot that was next to Lachoff. Jackie Gothard commented, “for 25 years as our gabbai he watched over our Torah scrolls, and he still is.”

Topolosky recalled Gothard’s comment to visiting groups that most Jews never see the burial of a Torah scroll in an entire lifetime, but this congregation saw seven at one time.

A headstone where the Torahs are buried carries three significant dates — the storm, the burial of the scrolls and the date when the headstone unveiling was supposed to be — in an ironic twist, the August 2008 ceremony was postponed due to evacuations for Hurricane Gustav.

There was also the burial of 3,000 holy books in the far corner of the cemetery.

The weekend began with Shabbat services and a musical Havdalah. The culmination was a packed house for the Aug. 23 gala dinner.

Much of that evening was devoted to looking forward. It was announced that the Oscar J. Tolmas Charitable Trust was underwriting the rabbinic chair at Beth Israel. Greenberg, who Bain then introduced as the holder of that chair, said that contribution “allows us to focus more narrowly on the mission of Beth Israel — spiritual life, learning and community.”

Greenberg said they will “double down” on children’s education and adult programming. “We’re confident about our future success.”

Part of the evening was a discussion between Loewy and Topolosky about the relationship between the Reform and Orthodox congregations, “two synagogues side by side with a playground in the center, where the kids can play together.”

Topolosky commented that uniformity “is not the value. We can be united, we can work together, but to be homogeneous is not the value of the Jewish community.”

Loewy said New Orleans is all about family, and half of the Gates of Prayer leadership had family connections to Beth Israel — not to mention other connections, including how Loewy officiated at the baby naming for Greenberg’s wife in Houston.

Topolosky said Katrina pushed the two congregations closer than they otherwise would have been, but also mentioned that the fundraising for Beth Israel’s first building a century ago included significant support from the Reform community of New Orleans.

While much was made of how Topolosky and Loewy studied and taught together, along with Rabbi Ethan Linden of Shir Chadash, they said it was not unheard of in New Orleans, with the legacy of the Melton program. The relationship continues during Greenberg’s tenure.

After Katrina, “We became the poster children for the concept that Reform and Orthodox congregations, rabbis and communities can work with each other in close, personal ways,” Loewy said.

At the beginning of Yom Kippur in 2006, Beth Israel was finishing Kol Nidre in the social hall as Gates of Prayer was just starting. Eddie Gothard said “we hear this sound system and a woman’s voice.”

Loewy quipped, “it was good for you.”

While some feared the visiting rabbi, Joseph Friedman, would walk back to Memphis in disgust, instead he said he was going in to the Reform service.

Loewy was told that Friedman wanted to address the congregation. “I can’t say no,” he remarked. Naturally, Friedman would not use the microphone, but “he shared one of the most meaningful and touching moments of worship one could imagine.” He spoke of the midrash about the line in the Kedusha, “Holy, holy, holy,” when the angels turn toward each other. At that point, the angels who usually are rivals reconcile with each other before God.

Topolosky recalled having national officials from the Orthodox Union and the Union for Reform Judaism sitting at the same table when the congregations signed the land deal that paved the way for the new Beth Israel building. “It was an incredible statement for this community… sending a message well beyond.”

Greenberg closed the evening by relating how Judaism has a blessing for everything, including a little-known one he had never done — a blessing for seeing a destroyed synagogue that has been restored to its former glory.

The blessing praises God “who sets limits for a widow.” There is a time for grieving, he explained, but at some point “there can be rejoicing again.”
He concluded, “I look forward to many more years of rejoicing with all of you.”