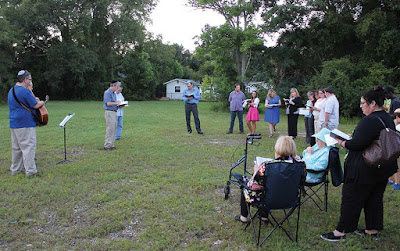 Before Shabbat services began on Aug. 28, Milt Grishman looked at the empty lot at the corner of Camellia Street and Southern Avenue in Biloxi and remarked, “these palm trees are like old friends.”

The trees are at the perimeter of what used to be the site of Biloxi’s Congregation Beth Israel, until Hurricane Katrina flattened the Mississippi coast in August 2005, and Grishman said they gave a Middle Eastern atmosphere to the site.

While much of the focus on the 10th anniversary of Hurricane Katrina is on New Orleans and the levee breach there, Mississippi’s Gulf Coast felt the brunt of the storm itself. There were 238 Katrina-related deaths in Mississippi, 167 of them along the coast.

The congregation marked the storm’s 10th anniversary by starting Shabbat services at its former home, then finishing the service in its new post-Katrina facility, 14 miles away in Gulfport.

After the congregants sang “Hinei Mah Tov” as the sun began to set over the Biloxi site, Beth Israel President Brad Kessie said “It is appropriate that we start here, because this is where we began.”

Though many felt an obligation to mark the 10th anniversary, there seemed to be little enthusiasm to relive those days and a desire for the anniversary to pass quickly.

After Kessie’s opening remarks, Goldin started leading a typical Kabbalat Shabbat service as 25 members stood in the location where the sanctuary and kitchen had been.

At the new building, Amy Goldin led the rest of the service, with little mention of what had happened 10 years earlier.

The August 2005 storm brought a surge that flattened structures, often leaving just a concrete slab as the only evidence buildings had been there. Casinos that had been built over the Gulf were lifted and placed on what was left of the beach highway.

Though Beth Israel’s building was still standing, much of the brick façade had been peeled off the building, and water ruined the inside.

The Torahs had been placed upstairs and were safe, and many of the fixtures were able to be salvaged and included in the new building.

In the days after the hurricane, a Chabad team wandered the Mississippi coast along now-unmarked streets, checking on Jewish families by using a list compiled from years of travels through the area, offering assistance with everything from food to ripping out moldy carpets.

With a rabbi and cantor sent by United Synagogue, Beth Israel was able to hold High Holy Days services at Keesler Air Force Base five weeks after the storm.

There was a debate over whether the old building could be renovated or rebuilt, while weekly services were held at Beauvoir United Methodist Church.

When it was determined that the building could not be saved and new guidelines made rebuilding prohibitive for a 50-family congregation, plans began for a new facility, much further inland on property donated by the Goldin family.

Contributions from all over the country brought in about $600,000 toward rebuilding. Ground was broken in late 2008, and the new building was dedicated in May 2009.

The Biloxi site still sports a for-sale sign, and bits of the building’s bricks remain embedded in the ground. With many lots for sale in Biloxi, there is no telling how long it will take for the congregation to sell the land.