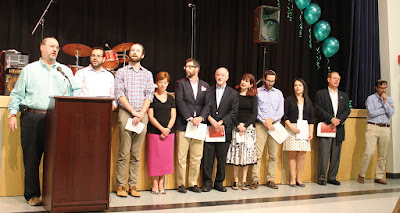 Cantor Joel Colman leads “Shehecheyanu” at the conclusion of a brief remembrance led by the New Orleans area rabbis.

On Dec. 20, 2005, a New Orleans Jewish community homecoming and Chanukah celebration at the Uptown Jewish Community Center drew a huge crowd as the first community-wide event held since the flood. Donated Chanukah menorahs and other ritual items were distributed to those who were able to make it back to New Orleans and needed to replace what was lost in the storm.

In that same room on Aug. 28, the 10th anniversary of Hurricane Katrina was marked with a decidedly more upbeat event, featuring music, dancing and a New Orleans-style kosher feast of jambalaya, beef debris po-boys, corn and potatoes. 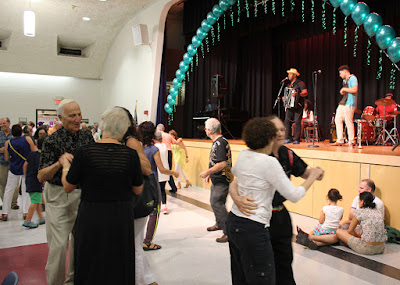 It was even a birthday party, as a large cake was served after everyone sang “Happy Birthday” to Sara Stone, “the matriarch of our community,” for her 100th birthday.

Allan Bissinger, who served as president of the Jewish Federation of Greater New Orleans for two years just after the storm, summed it up by adapting the traditional joking definition of a Jewish holiday: Katrina “tried to kill us, we won, let’s eat.”

The evening started with remembering the storm and how the community pulled together afterward, with a lot of help from the rest of the world. That Chanukah party from 2005 was referenced several times.

Bobby Garon, who emceed the evening, opened by saying “We commemorate the memory of Katrina, the tragic loss of precious lives and the hardships that all of us who were here 10 years ago endured,” but the evening was also “to celebrate the tremendous success and progress that our city and the Jewish community have accomplished over the last 10 years.”

Garon was finishing his term as Federation president when the storm hit.

“We could not remember Katrina without doing something pro-active,” Garon said, mentioning the TikkuNOLAm program building houses with the St. Bernard Project that had taken place on Aug. 9, and the effort that evening to partner with and collect items for the Youth Empowerment Project.

The rabbis and cantors from Greater New Orleans did a reading, remembering everything from the initial forecasts to those who welcomed evacuees, newcomers and those who contributed to the rebuilding. There was a moment of silence for “those who died in their homes, in the streets and from the stress of the experience.”

“Knowing that there remains much work to be done to bring wholeness to all,” Cantor Joel Colman led a group Shehecheyanu because “still we celebrate having reached this moment.”

In another room, the Federation’s video, “Our Hurricane Katrina Story,” which was used to tell the city’s story when raising recovery funds years ago, was screened.

Several out-of-town guests were recognized by Garon for their roles in the community’s recovery. Lee Wunsch, executive director of the Jewish Federation of Greater Houston, “welcomed so many of us into their community and adopted us as their own.” The New Orleans Federation set up a “Federation-in-exile” in the Houston office until they could return to New Orleans.

Howard Feinberg, former managing director of United Jewish Communities Consulting, “spearheaded the fundraising effort that helped not only our community but also the Gulf Coast.”

Rabbi Deborah Hirsch was co-director of the Union for Reform Judaism’s disaster relief, assisting the four Reform congregations in the community.

Arnie Fielkow, who played a role in keeping the New Orleans Saints in the city after Katrina and was elected to the New Orleans City Council, was also recognized. He is now CEO of the National Basketball Association Retired Players Association, but Garon reminded him that he will eventually be returning to New Orleans.

Eric Stillman was also recognized in the out-of-town segment, but Garon said he could officially announce that Stillman has returned to New Orleans. Stillman was executive director of the New Orleans Federation from 2000 to 2006.

Garon was scheduled to step down as president a week after Katrina hit, with Bissinger succeeding him. Despite the hardships everyone was enduring, Garon said “Allan did not hesitate a bit” to take the reins. “We are hugely indebted and grateful to Allan for his time, energy and devotion, and his vision to make sure this community survived.”

In his remarks, Bissinger recalled how so many packed for a two or three day evacuation “like you had done for so many hurricanes… just part of being in New Orleans.” With most of his family safely elsewhere, he decided to ride it out.

Bissinger said the three days after the levees broke were the quietest he would have for a couple of years. He stayed on the second floor of his home reading Harry Potter books. Finally on Thursday after the storm, he realized the waters weren’t going down and he was starting to run low on peanut butter and bottled water, so he swam out of his house and was rescued by a passing boat, and made his way to Baton Rouge.

“Normalcy was gone,” he said.

In Baton Rouge, Rabbi Martha Bergadine, executive director of the Jewish Federation of Greater Baton Rouge, had secured some apartments for New Orleans evacuees. “In every community… there was an outpouring of heart-felt compassion” for the evacuees, Bissinger said.

A three-year plan with UJC began, and the Jewish Endowment Foundation of Louisiana and the Goldring Family Foundation also kicked in a great deal of relief assistance. Bissinger said that was important, so New Orleans could tell the world “look at what we are doing to help ourselves. Want to join us?”

The community gradually went from survival mode to rebuilding mode. While estimates vary widely, anywhere from 20,000 to 50,000 Jewish volunteers have come from around the world to help rebuild New Orleans, he said.

Over $19 million that was raised nationally was allocated through the New Orleans Federation to keep the 19 community organizations and congregations going. “All Jewish institutions which were here before Katrina are still here today, with some new ones,” he said. A community-wide strategic plan was developed to help the community “get past it. And as a community, we have.”

A key component was the newcomers program, to replenish the numbers of those who did not return. About 2300 newcomers benefited from the program, and the Jewish community now numbers 10,300, and still growing.

The evening was jointly sponsored by the 19 local institutions.

The formal part of the program concluded with Colman leading the room in “God Bless America,” then the party began.

Sunpie and the Louisiana Sun Spots started their performance with “You Feel Like Coming Home.”