The Most Unlikely Kippah Collection 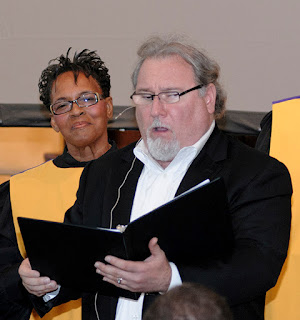 The next day, I am still processing the events of Aug. 26.

That evening, Midbar Kodesh Temple in Henderson, Nev., along with the Zachor Holocaust Memorial Foundation, hosted a program featuring some remarkable speakers. The first was Ben Lesser, a Holocaust survivor who shared his remarkable story of courage, perseverance and survival from Auschwitz and Dachau. Ben has spoken before at MKT, recently to our older Religious School students. His story is eloquent and moving.

The next speaker, Khubaib Ali Mohammed, was one of the members of the prosecution team which recently convicted Oskar Grüning, the so-called “book-keeper of Auschwitz.” He spoke about Grüning’s trial, as well as the challenges involved in prosecuting Nazi war criminals so many years after the Holocaust.

The final — and perhaps most remarkable — speaker was Rainer Höss, grandson of Rudolph Höss, commandant of Auschwitz-Birkenau — the man responsible for the brutal and systematic murder of over a million souls, 90 percent of the victims Jewish.

Rainer told the story of his discovery as a teen of his grandfather’s role in the Final Solution, his gradual disassociation from his unrepentant family, and his recent work around the world speaking out against right-wing extremism and for the prevention of genocide through the work of his foundation, Footsteps.

After the event, I found myself, along with a few congregants, engaged in conversation with Rainer. It was a fascinating discussion of about 30 minutes. He has a historian’s grasp of events leading from the First World War to the Second, and some intriguing thoughts about the primary incitement to German anti-Semitism between the wars. (He attributes the greatest influence over the German people’s views about Jews to Julius Streicher, editor of the anti-Jewish rag Der Stürmer beginning in the mid to late 1920’s. Not sure about that, but it’s an interesting thought. As a side note, the rabbi of my youth, Josef Kratzenstein, was an early critic of Streicher; it was Kratzenstein’s criticism of Streicher which caused him to flee to Switzerland before the war. Kratzenstein’s family perished at Auschwitz.)

Rainer and I continued our conversation as we walked toward the synagogue’s front door. Suddenly he stopped, and placing his hand atop his head said, “I’m so sorry! I forgot to wear my kippah (yarmulke) tonight! I always wear my kippah when I speak at a synagogue.”

Somewhat taken aback, I offered how incredible it was that the grandson of Rudolph Höss has his own kippah. Rainer told me that he actually has a collection of kippot from every synagogue where he has spoken.

I asked him if he has one to remember his talk tonight at Midbar Kodesh Temple. When he said no, I took the kippah from my head and offered it to him. He accepted it with thanks. (He actually clicked his heels as he thanked me.)

As I watched the grandson of Rudolph Höss — commandant of Auschwitz-Birkenau and one of the most horrific mass-murderers in all of Jewish if not human history — walk through the Midbar Kodesh Temple parking lot with my kippah in his pocket, what I saw was a clear vision of hope despite the darkness of the past, and strength to confront the uncertainties of the present.

Even if it takes generations.