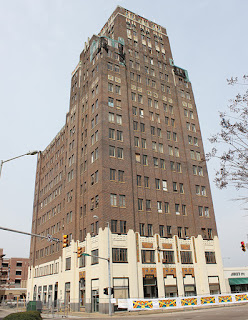 After years of standing vacant in downtown Meridian, a landmark of Meridian Jewish history has been sold and will be redeveloped.

On Sept. 15, the 16-story Art Deco Threefoot Building at 22nd Avenue and 6th Street was sold to Ascent Hospitality Management of Georgia, which plans to turn the building into a Courtyard by Marriott hotel. The company recently opened a Fairfield Inn and Suites in Meridian, and is also working on a Marriott Autograph Collection hotel in Birmingham, in the Empire building downtown, part of what was known as the “Heaviest Corner on Earth.”

Ascent President John Tampa told the Meridian City Council that the new hotel will retain its historic name and be called Courtyard by Marriott/Threefoot.

The company paid $10,000 to the city for the building, “as-is.” They agreed to begin construction within 12 months of the deal being finalized, and will lease 80 parking spaces in the city garage. The city committed to improve lighting, sidewalks and landscaping to match the nearby Mississippi State University Riley Center for Education and Performing Arts.

Tampa said the renovation will take 14 to 18 months once work gets underway, and the company is committed to spending at least $14 million on the building.

The Threefoot Building was immortalized by Ripley’s Believe It Or Not as “a 15-story building on a three foot lot,” playing off the name of the prominent Jewish family that developed it.

In 1890, Abraham’s two sons married into the Rothenberg family, combining their grocery businesses.

In the 1920s, Sam Threefoot built what was Meridian’s only skyscraper, completing it in 1928 on the previous site of the Threefoot Brothers Wholesale Company. At the time, it was the tallest building in the state.

The Great Depression then hit, depressing the building’s occupancy rate. The building became a drain on the family’s finances, and the family lost the building.

It continued on as an office building, but suburban development in the 1960s and 1970s led to downtown’s decline and it became vacant.

In 2013, a volunteer group called the Threefoot Preservation Society started meeting under the leadership of Amos Jones to try and stabilize the building in hopes it might attract a developer. They have been on-site every month doing basic restoration and preservation work, and witnessing approval of the agreement three days after their most recent workday was an emotional time for them.

Jones said the deal “is all we’ve ever wanted, really. Just for someone to take it and to develop it and make it into something that brings back the glory to downtown.”

Lauri Hoyt, a member of the society, said “I feel like a puppy’s foster Mom who is glad when someone adopts him but frets about whether they will care for him as you did.” She added, “it will be a wonderful outcome for the Threefoot building and Meridian!”

Mayor Percy Bland has been in talks with Tampa for a year and said “We thought this deal was the best fit for our city.” Local tourism officials noted that there was no downtown hotel to serve the Riley Center, making it impossible to bid on numerous events.

When the Riley Center was redone a decade ago, the master plan called for a hotel in the Threefoot Building, which is just across the street. The Riley Center also has Jewish roots, as it is in the historic Marks-Rothenberg Building and the Opera House next door. The Opera House closed in 1927 as contemporary movie theaters took over. Decades of lawsuits kept the doors closed and the interior virtually untouched, ready to be restored when the project began in 2003.

With the Threefoot building’s future now more certain, the Threefoot Preservation Society will nevertheless continue, announcing on Sept. 22 that the former Meridian Police Department building will be its next project.