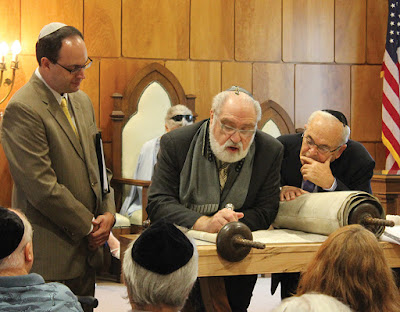 Two Alabama communities dedicated Torah scrolls on Sept. 20, and it turned out to be a story of something old and something new.

Tuscaloosa’s Temple Emanu-El dedicated a Holocaust Torah that is on “permanent loan” to the community and turned out to be a lot older than anyone expected, while the Bais Ariel Chabad Center in Birmingham celebrated the completion of a brand new Torah, in memory of Brian Grodner.

The Tuscaloosa scroll came from the Westminster Synagogue in London, which administers the program for 1,564 Torah scrolls that had been plundered and gathered by the Nazis from synagogues in the Czech “protectorate.”

After almost two decades in the disused Mishle Synagogue in Prague after the war, the scrolls arrived in London in 1964, and Westminster started a program to distribute them to congregations worldwide.

Synagogues in need of a scroll to use receive priority, while congregations with numerous Torahs of their own are encouraged to accept scrolls that are not ritually usable so they can serve as memorials to the martyred communities.

Hattie Kaufman, co-president of Emanu-El, said Rabbi Steve Jacobs asked the congregation in early 2014 to explore the possibility of obtaining one of the scrolls. The congregation raised $7,000 and received Scroll 501 in September 2014. Unilke most scrolls, which had meticulous documentation as to their origins, this Torah’s back story was unknown.

“We do not know the community from which this Torah was stolen,” Jacobs said. We do not know the Jews who worshiped in a synagogue, who were murdered, where this scroll was housed. Even though they are unknown to us, they are still alive through us.”

Paul Aharon, who holds the Loper Chair in Geology at Alabama, explained the quest to find out more about the mysterious scroll, and said his talk would hopefully bring “some good news” after the previous night’s football game against Ole Miss.

Most of the Czech scrolls date from the 18th or 19th centuries. With agreement by the Emanu-El board and consent by Westminster, he and Jacobs carefully extracted two fingernail-sized pieces of parchment for carbon dating.

As he was working on a grant at the time, he convinced the lab to throw in that test as well, which is usually about $600, he said.

When the test result came back, everyone was stunned to learn that the parchment dated from 1270, give or take 45 years.

In 2013, it was announced that carbon dating on a scroll that had been “hiding in plain sight” at the University of Bologna in Italy was between 1155 and 1225, and it then became the oldest known full Torah scroll in the world, pre-dating Maimonides’ codification of the rules for writing Torah scrolls.

“You can imagine the shock Paul and I experienced” upon receiving the report, Jacobs said. “We are in the possession of a 750-year-old Torah scroll, used by generations of our people.”

Aharon said the scroll will be “treated with the utmost love and care.”

This is the fourth Holocaust Torah that Jacobs has brought to the state. Since becoming a rabbi in 1974, he has served congregations in Mobile, Birmingham and Huntsville, and arranged for scrolls at each of those locations.

For Jacobs, dedicating the scrolls is personal. His father escaped Germany early in the war using a forged passport and lived on the docks in Italy “by his wits and his fists.” Out of a 150-member family, his father was one of only eight survivors.

“He lived with that knowledge all his life,” Jacobs said, “and he died at age 60 of a broken heart.”

When Jacobs was ordained, his father cried, something which was unusual for him. While Jacobs thought it was the emotion of his ordination, his father said it was because “the moment that you were ordained, I saw my father’s face.”

As he and Daniel Siegel brought that Torah into the room, Jacobs said, “I saw my dad’s face. And I saw the faces of every other one of our people who was lost during that horrific period in our history.”

The Torah’s presence in the ark at Emanu-El is a pledge by everyone in the building to never forget, he said. “That community did survive because that scroll is here.”

At the ceremony, Jacobs read the first five sentences of the Torah. “To our knowledge, this is the first time this scroll has been read from since the end of the Second World War,” he noted. 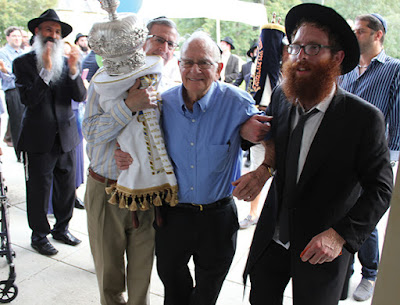 A Birmingham native, Grodner died of cancer at age 55 in 2013. While seeking treatment in Houston, he became active with Chabad there, and a playground at Torah Day School was dedicated in his memory.

A graduate of the University of Alabama, Grodner served in the military, worked as a defense contractor and later in his career started a web-based brokering business.

He was known for a joyful outlook no matter the circumstances. He wrote “Cancer Is Not the Boss of Me” to guide patients through the process of diagnosis and treatment. At the Chabad in Houston, he would give talks entitled “Overcoming Challenges: The Power of Positive Thinking.”

He was diagnosed with Stage IV Metastatic Melanoma of the liver, both lungs, and gall bladder in 2009, and said he was “thrown into a fight for my life with no hope of a positive outcome, very little knowledge of my disease and no idea how to fight for my life,” and was told he had five or six months to live. A second opinion was more encouraging, and the family moved to Texas for his treatment.

In his book, he wrote how doctors told him that there were plenty of people with “dismal” chances of survival who nevertheless maintained a positive outlook and did survive, and others “with every medical reason to get better but lacked the optimism and belief in their ability to return to a normal lifestyle, who, to everyone’s surprise, died.”

Many from Houston were at the dedication and spoke of his consistent positive outlook and attitude.

Rabbi Yossi Posner said Grodner “personified devotion to purpose. As he loved and was devoted to his family, so was he devoted to Hashem, His Torah and His presence in our lives.”

The festivities began on the Overton Park tennis courts, under a tent filled with tables and refreshments, as the last letters of the scroll were inked in.
Toward the end, all of the children were called up for a children’s letter, then after the final letter was done, and plenty of time given for the ink to dry that humid afternoon, the scroll was lifted and dressed, then the parade began.

As a truck provided celebratory music at the head of the parade, the children walked carrying plush Torahs and balloons, and dozens of celebrants took turns walking with the completed Torah under a chupah down a closed-off Overton Road while others danced down the street.

Outside the Chabad Center, the two other Torahs were brought out to “welcome” the new scroll, then all three were paraded into the building, with Paul Grodner and Ken Grodner carrying the new Torah through the door (photo above).