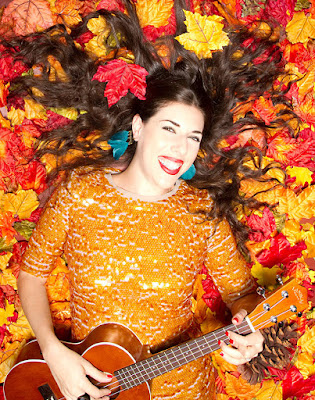 Joanie Leeds will be in concert on Nov. 13

Birmingham’s Levite Jewish Community Center is hosting a series of programs in conjunction with Jewish Book Month throughout November.

Co-sponsored by the Birmingham Jewish Foundation, the series began on Nov. 1 with journalist and fatherhood columnist Josh Levs. “All In: How Our Work-First Culture Fails Dads, Families, and Businesses–And How We Can Fix It Together

” describes his successful battle with his employer for parental leave and how fatherhood today differs from previous generations.

On Nov. 5, Dave Gettinger will present “What is a Jew?” by his father, Mike Gettinger, who died in Birmingham in 2000 after a career in Jewish social services. He had been executive director of the Atlanta Jewish Federation for 20 years.

The children’s book starts with Abraham and has profiles of numerous important Jewish figures through the ages, such as Moses, Isaiah, Maimonides and the Ba’al Shem Tov.

.” This book and “Changing Seasons, Five Decades in Jewish Communal Service 1938-1990” were published posthumously in 2004.

The 6 p.m. program will include a wine and cheese reception, and attendees will receive a free copy of the book. The illustrations by Cynthia Fitting will be on display at the LJCC all month.

On Nov. 10, Marcia Friedman will present “Meatballs and Matzah Balls: Recipes and Reflections from a Jewish and Italian Life

,” the story of re-creating her Italian-American kitchen after her conversion to Judaism, exploring the union of Jewish and Italian life through food. The noon cooking demonstration, discussion and tasting is $10.

On Nov. 13 at 10:30 a.m. there will be a free children’s concert with the husband-and-wife duo of Joanie Leeds and drummer Dan Barman. Leeds is an award-winning songwriter of both Jewish and secular music. Her “Jewgrass” — Jewish Bluegrass — CD “Challahchallah

” has a sound reminiscent of the Greenwich Village folk revival of the 1960’s and is a collection of Shabbat, holiday songs and liturgy perfect for families with young children. Barman is an award winning performer and musical educator.

In 2000 as a senior at Syracuse, Leeds recorded “My Job Application Knows More About Me Than You Do

.” In 2006 she started working at a Gymboree location in New York, and began to write children’s music. Her first such album, “City Kid

She married Barman in 2012, and her most recent CD, “Bandwagon

Children’s author Dori Weinstein will visit Birmingham during the festival for a weekend of events at the LJCC, N.E. Miles Jewish Day School and Temple Beth-El.

A native of Queens, N.Y., Weinstein now lives in Minneapolis. She has taught in public and Jewish schools, and speaks about writing through a Jewish lens.

She has released two books in her “YaYa and YoYo” series. “Sliding Into the New Year (YaYa & YoYo, Book 1)

” is about YaYa, a fifth grader who wants to visit the local indoor water park, and finally is invited by her best friend — but her twin brother, YoYo, points out it is the first day of Rosh Hashanah.

” is about the twins and their classmates finding an unusual four-legged visitor in their congregation’s Sukkah just before the holiday.

The Jewish Book Council says the books are lighthearted romps “for middle readers with some substantial messages subtly worked into the fun.”

She was inspired to write the books about a decade ago when she was working a Jewish book fair and noticed that most of the children’s books were about the Holocaust or set in the early 1900s. She told Times of Israel that “there needs to be Judy Blume meets ‘All of a Kind Family’.”

Her children advise her on contemporary authenticity, and she plans to eventually have 12 books in the series.

She will visit with students at the N.E. Miles Jewish Day School on Nov. 13. At Beth-El, she will be the special guest for the 11 a.m. Tot Shabbat service on Nov. 14, and lead a teen and adult “Writer’s Process and Purpose” workshop starting at 3:15 p.m., followed by Seudah Shlishi and minyan.

On Nov. 18, T.K. Thorne will discuss her Biblical novel “Angels at the Gate

” in a 5:30 p.m. program co-sponsored by Hadassah and the Sisterhoods of Knesseth Israel, Beth-El and Emanu-El.

A native of Montgomery’s Jewish community, Thorne is a retired Birmingham Police captain and now is executive director of CAP: City Action Partnership, which works with businesses, residents and the police and has reduced crime in the central city by almost two-thirds since 1995. She is said to be the first Jewish female police officer in Birmingham.

,” received an award as Book of the Year for Historical Fiction. A short film from her screenplay “Six Blocks Wide” was a finalist in a film festival in Italy and has shown at other juried festivals in the U.S. and Europe.

A follow-up to “Noah’s Wife,” “Angels at the Gate” gives a name and a backstory to Lot’s wife, who in the Biblical account is turned into a pillar of salt for looking back at the destruction of Sodom and Gomorrah when Lot and his family flee.

The festival concludes on Dec. 8 with “The Return: A Documentary About Being Young and Jewish in Poland.” A discussion will be moderated by Samantha Dubrinsky.

The film follows four women in their 20s who are trying to rediscover their heritage, one that had been buried until Communism fell in 1989. There are currently about 20,000 Jews in Poland, where there had been 3.5 million before the Holocaust.

The four women are part of the “new Jews,” third-generation of Holocaust survivors, many of whom were raised Catholic and discovered their Jewish heritage when they were teens. They have to forge a path in a place with a rich Jewish history but very little present, and figure out what it means to be part of an ethnicity.

Festival events are open to the community, and during the month there will also be a book sale in the lobby.