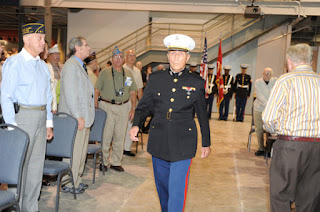 The New Orleans Jules Lazard Post 580 of the Jewish War Veterans of America continues its tradition of honoring veterans with a historic program on Nov. 11 for Veterans Day.

Gothard said that there have been Jewish and JWV speakers at Legion meetings before, and speakers from the Legion at JWV meetings, but to his knowledge, there has never actually been a joint meeting of this sort.

“There has been the persistent anti-Semitic myth and stereotype that Jews were cowards who wouldn’t fight for America,” Gothard said. “The Jewish War Veterans of America was organized in 1896, by veterans from both sides of the Civil War, to absolutely refute these blatantly false assertions.”

He noted that JWV is the first and oldest of the U.S. veterans organizations, with the larger VFW and American Legion coming later.

His presentation starts with the Biblical patriarchs, kings and judges, goes through Colonial times and all wars to the present, showing how Jews fought for America, including Medal of Honor recipients.

“In World War II, for example, there were over 500,000 Jewish men and women, including my three older brothers, who valiantly served, and thousands of whom died,” Gothard said.

The local JWV also has a Memorial Day tradition of honoring departed Jewish American men and women who served in the armed forces by having a ceremony at the cemetery.

This year, since Memorial Day fell on the holiday of Shavuot, the remembrance ceremony was held the next day, May 26, at the Beth Israel cemetery. The Gothards were joined by Lisa Romano, a long-time friend and employee of the late Oscar Tolmas, and Beth Israel Rabbi Gabriel Greenberg.

American flags were then placed on the graves of all veterans.

Gothard said that American Jewish veterans of any branch of the military, or Jewish veterans of an allied country or on active duty, are eligible for membership in the New Orleans Post, which has been recognized as the fastest growing and most diverse JWV Post in the nation. The diversity is a result of Patron members, over 35 of whom are of other faiths, including 5 African-Americans and a Kurdish Muslim from Turkey who is now an American citizen.

“They joined because of the humanitarian work we do on behalf of homeless veterans, participation in the annual MLK Day parade, and more,” Gothard said. Anyone can join as a patron member; one does not have to be a veteran or Jewish.