Longue Vue House and Gardens: The Architecture, Interiors, and Gardens of New Orleans’ Most Celebrated Estate 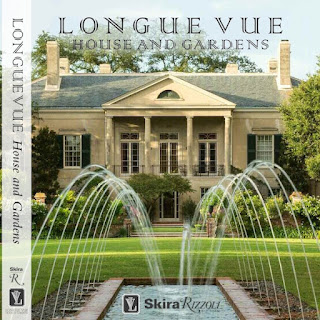 Review from the November issues of SJL:

Substantial enough in size and comprehensiveness of content, “Longue Vue House and Gardens” is destined for display rather than to be shelved away and will be the book to give and receive this holiday season.

Those interested in the New Orleans landmark’s architecture and landscape will appreciate the biographies of the planners and details of how elements came together as well as letters of appreciation from Edith and Edgar Stern, the original owners. The home was built between 1935 and 1942 with eight acres of gardens.

Quality, large-scale photography abounds in the book, including that of plant specimens conveniently paired in text with their nomenclature. Ellen Biddle Shipman’s planting plans (even the spring, summer planting plan for the portico garden) along with lists of each variety used as in the Japanese Iris area, and other plans with each vegetable enumerated with its place in the vegetable garden are especially noteworthy.

Beside seeing the home in person at an event or as part of a tour, the images of the interior — along with architectural and furniture plans — show how timeless the the furnishings, fabrics and millwork truly are alongside the inventiveness the Sterns incorporated such as built-in bathroom scales, elevator, a dark room, and the first integrated central air conditioning system in the area.

Those familiar with Louisiana architecture will especially appreciate how so many elements of the home are inspired by other landmarks such as the Beauregard-Keyes House, the Uncle Sam House in Convent, and Shadows-on-the-Teche in New Iberia.

There is also a section on the Sterns. His family was in the cotton factoring business in New Orleans, while she was the daughter of Julius Rosenwald, president of Sears, Roebuck and Co., who also bankrolled efforts to build thousands of rural schools for blacks throughout the South.

The book details the couple’s philanthropic endeavors in the New Orleans area, in the Jewish and general communities. They were instrumental in the formation of Dillard University and Flint-Goodridge Hospital, though the book notes the Sterns had to be “resourceful” in discussing the institution because of rigid racial social codes of the day.

—
The review may also be found in the November issues of SJL. Digital files here.