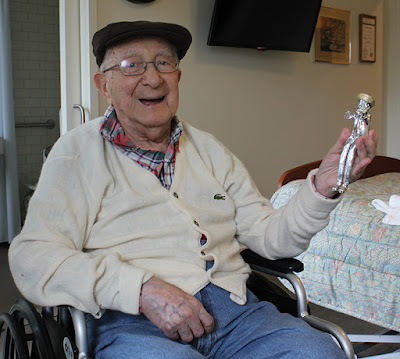 For Joseph Sher, who has made his home in New Orleans for 65 years after a lengthy ordeal in surviving the Holocaust, there are two phrases that detail his outlook on life.

The first is “God Bless America.” The second one, which he continues to share with everyone as he approaches the age of 100, is “Stay young, zei gezunt.”

Rabbi David Polsky of Anshe Sfard in New Orleans said it is remarkable that “someone who went through the worst thing known to man can still be among the most cheerful people you’ll ever meet.”

Joseph was a tailor in New Orleans for decades, but for years before that, those skills served him well and helped him survive the Nazi regime for a long time.

“So many little things had to coexist for him to survive,” said daughter-in-law Karen Sher, who is married to Joseph’s son Leopold. “It helped he was a tailor, but there were a lot of other things too.”

Joseph was born in Krzepice, a small town in Poland. He was the middle son of three boys and had three sisters. Well before the Holocaust, he experienced anti-Semitism in school and on the street.

When the Nazis came, the family was living in Czestochowa. Every Jewish male between 15 and 80 was ordered to assemble in the market, where every 10th or 12th man was shot.

Joseph and a friend tried to escape to Russia, but the Russians stopped those who were trying to flee. They returned to Czestochowa.

Each family was ordered to send one man to build a highway in the east, and he went because his older brother was married and his younger brother was not old enough. Of the 1,000 from the city who were sent to build the highway, he was one of only three to survive.

While he was in the labor camp for nine months, two German Jews in the town ghetto, who had contacts, managed to get Joseph freed. Upon his return, he developed typhus, an instant death sentence if the Nazis found out. His family hid him behind a wall for a month until he recovered.

On Yom Kippur in 1942 there was a massive deportation, and his grandmother was killed in front of them.

His older brother, Leo, had been selected to take care of the dog belonging to the chief of the Gestapo — for the childless couple, the dog was their child. “They loved Leo so much that they treated him like he was their own son,” Joseph said.

When the entire ghetto was being liquidated to Treblinka, the chief tipped Leo off about the plan, and told him they had confiscated a Jewish man’s porcelain factory and needed 10 workers, who he could select. Joseph, a cousin and eight others started working there for a few weeks, then another manager kicked them out, sending them back to a smaller ghetto.

From May 1943 to January 1945 he and his wife, Rachel, worked in a slave labor camp making ammunition. “I was lucky: my job was to be a tailor working for the German officers. My wife’s job was to carry boxes of ammunition to the trucks.” The women who filled the shells got sick from the powder, and were killed when that happened.

The German officers had confiscated all the minks and furs from the Jews and gave them to their wives. Among his many other jobs, Joseph was tasked with repairing the coats, then fitting the officers’ wives.

In January 1945 the Russians approached the camp and the Germans fled. A few hours later, the Germans returned and urged the workers to escape with them, since the Russians supposedly would kill them for making the ammunition used against them. Most of them followed and boarded trains that never returned.

Leo, Joseph and Rachel did not get on the trains and made their way back to town. They found the Russians and the Jews dancing in the streets of Czestochowa.

Joseph met a Russian Jewish captain, Zalman Brodsky, who said they had to go back to the front but had no tailors, no underwear and torn uniforms. He went with the Russians and worked around the clock for them.

One day when Brodsky was away, another Russian officer did not believe the story of who Joseph was and put him in a prison camp with 5,000 German soldiers. When Brodsky returned he was enraged and went to the camp. A large man, he opened his coat and stuffed Joseph inside, then started to leave the camp. When the guards threatened to shoot, Brodsky said they would have to shoot Joseph through him.

After that, Brodsky personally delivered him back to Czestochowa.

Rachel was the only survivor from her family, so they went back to her home. The building’s janitor still lived there and was surprised to see them; his apartment was filled with furniture from her family.

Karen noted that returning Jews were routinely being killed in Poland after the war. Joseph said they did not trust the janitor so they quickly and quietly left.

At the building where his family had lived, Poles who had moved into the abandoned apartments threw unwanted items into the courtyard. “It lay there in a big pile for several years,” Joseph said. Deep in the pile he found a treasured heirloom — his family pictures.

After the war, Leo worked in the Polish army to uncover Nazis in hiding. He also procured a Russian truck and enabled 50 Jewish children to be smuggled across the Czech border in an illegal operation to circumvent the British blockade on Jewish immigration to Palestine.

After a 1946 blood libel pogrom in Keilce where 42 Jews were killed, they fled to Czechoslovakia, then crawled over the border to a U.S. sector of Germany. They lived in DP camps until 1949, and among other things he taught sewing skills to 22 girls in an ORT class.

Rachel had an aunt in New Orleans, Freda Stahl, so they arranged to be sponsored and brought over.

Unlike most Jewish immigrants who came to the United States, they went directly to New Orleans, where they got off the boat in March 1949 and Joseph kissed the ground.

At 6 a.m. the next day, he went to work at Harry Hyman Tailors. He worked from 6 a.m. to 6 p.m., six days a week for 40 years, taking off only for Rosh Hashanah, Yom Kippur, Passover and Shavuot.

Karen said he had “very prominent clients — he did suits for Elvis Presley, Chubby Checker, Fats Domino.” Nobody wanted him to retire. Even after he did, people would still bring things to him, she said.

Leopold said he was the tailor for all of the criminal court judges. Hotel doormen, who were tall, couldn’t buy off the rack so he did their custom clothing. He noted that Joseph was 5-foot-5 while the doormen were often close to 7 feet tall. “He’d have to jump up on the table to measure them.”

Just after they arrived, the Times-Picayune did a story on them, where Joseph said all he wants is “to get a job, forget the past, support my wife and child… To have privacy, not to be ordered about, not to have to stand in line — that is all I ask of life.”

A few days later he received a letter in the mail, but unable to read or speak English, he did not know what it said. He gave it to a cousin, who told him not to ask. The letter, which was turned over to B’nai B’rith, said “If Hitler did not get you over there we are going to get you here.”

Their first son, Martin, was born in a DP camp. Leopold soon followed after the family arrived in New Orleans.

Just once did Leopold see something other than a joyful demeanor from Joseph — when the film “Exodus” came out in 1961 and George Lincoln Rockwell, head of the American Nazi Party came to town with nine others to demonstrate outside the theater. “It was the angriest I’d ever seen him.”

Many in the community’s leadership wanted to be low-key about the protest to not give Rockwell publicity, but the local survivor community wanted to make Rockwell feel their presence.

That incident prompted local Holocaust survivors to form the New American Social Club, which instituted an annual Holocaust remembrance ceremony and became an organized voice for the survivor community.

The Shers lived on Seventh Street between Baronne and Carondelet, within walking distance of Anshe Sfard. Joseph says the small congregation is “my home” and still considers it the “highest mitzvah” to make the minyan there on Shabbat.

Though Joseph is now in a wheelchair and not within walking distance, he still goes to Anshe Sfard regularly. Because the 1920s-era building is not particularly accessible, every week a group carries him up and down the front steps, to the second-floor sanctuary.

Leopold says he has suggested going to another congregation which is closer or more accessible, but Joseph insists on being at Anshe Sfard.

At a Shabbat marking Joseph’s 99th birthday last November, Polsky said “he’s been the pillar of Anshe Sfard for over 60 years, helping to keep it going for many years when it was struggling to get a minyan.”

Joseph will often break out into song. Karen said if things had gone differently, “He could have been a star of the Yiddish theater.” Even now, “on occasion he’ll do a new song we’ve never heard before.”

In 2005, Leopold and Karen were away when Katrina hit, and Joseph had ridden out many hurricanes before. After the storm passed, Joseph told them it wasn’t so bad. Then the levees broke.

Joseph had an old hard-wired rotary phone. Just before the storm, he also got the Lifeline service. “When all communication in the city was down, somehow we are communicating with him by phone. No other phone in the city was working,” Leopold said.

On Aug. 31, Joseph was sitting outside his apartment on Broadway when Juan Parke came by, wading through chest-high water. Parke told him that he could lead him and the other tenants who were trapped to dry land, but they did not want to get into the water.

Parke told them he would try to find a boat — so they told him that they had seen one in a neighbor’s backyard. Parke “borrowed” it and transported Joseph and the others to safety. He later told the Times-Picayune that he told Joseph “I’d be damned if I’d let this storm do what the Nazis couldn’t.”

Joseph returned to New Orleans in March of 2006. He viewed Katrina as a “piece of cake” compared to what he had been through in Europe.

For a long time, he did not speak about his experiences, so as not to affect their children, but later on started telling them about it, bit by bit. In recent years he has spoken to school groups and given numerous interviews about his story.

With all of Joseph’s experiences, Leopold said he is “more of a patriot than most people. If there’s ever anyone who can appreciate this country… it’s someone who can compare” it to other places in the world.

“That’s freedom,” Joseph said. “Nobody is going to bother me here anymore.”