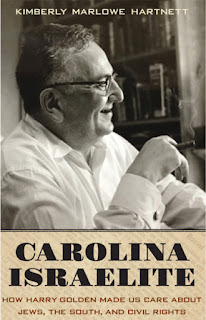 When I started attending national Jewish newspaper conventions in the early 1990s, when people found out where I was from, I was often asked if I knew fellow Southerner Harry Golden, with a tone that indicated they were speaking about one of the giants of our profession.

One really should know the trailblazers, but I knew next to nothing about Golden, except a vague notion of a publication in the Carolinas, though he was a household name in the 1950s and 1960s. His newspaper, the Carolina Israelite, folded in 1968, Charlotte is a six-hour drive from Birmingham — not exactly next door — and Golden died in 1981, when I was doing a newspaper… as a sixth grade student at the Birmingham Jewish Day School.

So, no, I did not know Golden.

In “Carolina Israelite: How Harry Golden Made Us Care about Jews, the South, and Civil Rights,” Kimberly Marlowe Hartnett preserves the story of a writer and publisher who is “a bit of a Forrest Gump tale,” having a front-row seat to a wide array of major historical events and never shying away from giving his opinion about them, regardless of what others thought.

Daughter of a transplanted Southerner, Hartnett said she grew up reading Golden’s books and her mother said she had worked for Golden at one time. While researching her book, she came across a folder among the Harry Golden papers at North Carolina-Charlotte that contained notes in her mother’s handwriting.

“Once I learned a bit about Golden I realized he was exactly the sort of person I love to read about — an unlikely and very flawed hero. He was a writer who used his celebrity to fight on behalf of others,” she said.

Born in 1903 in what is now Ukraine, Golden immigrated to New York with his family in 1907.

Goldhirsch, as his family name was back then, peddled newspapers on the New York streets. In 1915 at the age of 12, he was greatly affected by the front page story about the lynching of Leo Frank in Atlanta. Hartnett points out, “For the rest of his life, Golden was something of a student of what we now call ‘hate crimes’.” Fifty years later, Golden would write a book about the case, “A Little Girl is Dead.”

He would be influenced by storytellers and “showmen” publishers, such as “Little Blue Books” publisher Emanuel Haldeman-Julius, who would take sleepy classics and change the titles to something provocative, then list only the title in a mail-order catalog. But at the time that was a peripheral influence, as he was on Wall Street during the roaring 1920s — until he was sentenced to five years in prison for mail fraud involving stock scams, with Virginia Methodist Bishop and political activist James Cannon Jr. as one of his major clients.

After his term in prison, he sold advertising for a New York newspaper, then flopped at an ad venture tied to the World’s Fair, and was still involved in sketchy enterprises. In 1943, he was arrested in Birmingham after writing the Tutwiler Hotel that a representative of the “Advertising Trade Service Inc. of New York City” would be visiting and asked for “all courtesies” for the representative. While the Tutwiler was apparently happy to comp rooms and meals to someone they though was legitimate, they called the police when he started bouncing personal checks.

Traveling around as a writer and salesman, he wound up in Charlotte, which turned out to be a great fit. It was a small enough place where he could have a large effect, but large enough to have a vibrant journalism community. It was in the South, which was on the verge of a major societal change that meshed with his cheering of the underdog and passion for advocating equality.

He launched the “improbably titled” Carolina Israelite, spinning yarns and tackling controversial issues head-on. “He exposed racism in all its guises and deconstructed anti-Semitism, and he did it with wit and originality,” Hartnett said.

Golden “introduced whites to blacks, Gentiles to Jews. His endless stream of anecdotes gave northerners a glimpse of Dixie and Southerners a sense of the Lower East Side,” Hartnett said. Once he got his reader or listener to laugh — and it never took long — he could get them to question the status quo.

In the process, he amassed a huge number of celebrities and politicians as friends, though none as close as writer Carl Sandburg. Golden would often add a prominent person to his mailing list, and then mention in print that the unknowing individual was a subscriber, as a way of attracting other subscribers. “It’s amazing how often this led to real friendship,” Hartnett said.

At one point, his newspaper claimed 55,000 subscribers.

In 1958, a collection of his tales from growing up on the Lower East Side, “Only in America” became a surprise runaway best-seller. He followed it with one book per year, many of them also becoming huge sellers and earning him entrée to the “Tonight Show” couch.

It also led to the unmasking of his past, with the revelation of his fraud convictions — but the public shrugged off the scandal and in 1973 he even managed to get a Federal pardon from the Nixon administration.

As self-promoter, storyteller and humorist, sometimes his works fell flat as he played fast and loose with reality. Some of his more scholarly books are viewed with skepticism today, and when Life magazine hired him to cover the Eichmann trial, they discontinued his reports after the first one.

His writing included “Golden Plans” to change society, often absurd but pointed, such as his argument that if Jim Crow laws said mixing races was fine as long as people were not seated together, then schools should remove chairs from the classrooms.

When Martin Luther King Jr. wrote his Letter from Birmingham Jail, he listed Golden among the “too few in quantity” whites in the South who “have written about our struggle in eloquent and prophetic terms.”

As noted in the book, Golden certainly had comments to make after the 16th Street Baptist Church bombing in Birmingham, and Bloody Sunday in Selma.

But that was also the beginning of a demoralizing time for Golden. He would still travel and do lectures, but much of the grind of the paper was too wearing. Also, elements in the civil rights movement were transitioning from equal rights to black power, a shift that alarmed him. The assassinations of King and Robert Kennedy were also a heavy load for him to bear.

Golden’s life “encompassed some of the most fascinating and telling events in America’s modern history,” Hartnett said. “Anywhere big news was breaking, Golden seemed to be there.”