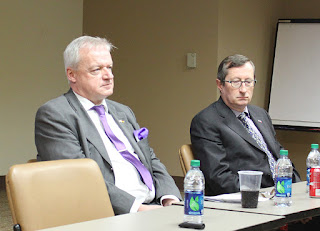 It was poignant timing that the Anti-Defamation League’s Atlanta office had scheduled a forum in Birmingham for Nov. 18 on “Anti-Semitism and Extremism in Europe,” featuring Atlanta-based diplomats from France and Germany.

The Nov. 13 terror attacks in Paris, which left 129 dead and hundreds wounded, cast a somber shadow on the event, which drew a full house to the community room at the Sirote and Permutt law firm.

The first half of the discussion dealt with the attacks and their aftermath.

Barbet explained that France uses the acronym Daesh instead of ISIS. “We refuse to recognize them as any kind of state, we consider them terrorists.”

If Europe unites behind the effort, “united with all democracies to fight against them, we will be able to defeat them,” Barbet said. “The sooner the better, for everyone.”

On Nov. 17, Germany cancelled a friendly match involving the national soccer team after people “connected to the intelligence community” said they had concrete information on a planned terror attack.

German Deputy Consul General Thomas Wulfing said in Germany, “everybody is on much higher alert than they were before” Nov. 13.

He added that a couple of alleged terror attacks were foiled, and there were arrests in Aachen related to the Paris attacks.

Barbet noted that preventing attacks takes a great deal of international cooperation. “We almost know from where they came, who their targets are. It’s not over. We are very aware more strikes will come — we’re going to try to prevent them, obviously.”

Both said that their countries’ intelligence forces are working with their counterparts in Israel. Barbet noted that in the case of the Paris attacks, most of the intelligence is being gathered in Europe, because that is where the “organizing, planning, acting and hiding” came from.

While ADL Regional Director Mark Moskowitz and local organizer Steven Brickman expressed solidarity with the people of France at the start of the event, Barbet reminded that the 129 who were killed in Paris represented 19 nations, including a student from California. “We are all targets of the terrorists.”

Wulfing noted “the attacks on Paris have shown all of us that we’re in this together. It happened to all of us.”

The attacks intensified debate in the United States over the wisdom of plans to welcome 10,000 “vetted” Syrian refugees, but the diplomats said there isn’t a similar debate against the refugees going on in their countries, and Barbet warned against conflating the Syrian refugee issue with fighting terrorism.

France is taking in 30,000 Syrian refugees in the next two years. While the debate in the U.S. centers on whether terrorists would take advantage of such programs to infiltrate western societies, Barbet said the attackers on Charlie Hebdo and the kosher supermarket earlier in the year “were French. They were not Syrian.” Likewise, the Nov. 13 terrorists were French and Belgian.

Barbet and Wulfing both said integrating the refugees into their respective societies is of the utmost importance. Barbet noted that the newcomers will have to accept French law and the openness of French society. “Even Muslims in France won’t accept Daesh imposing a religious structure on political life and law” in the country.

Wulfing said the dire situation in the Middle East means the newcomers won’t be looking to leave, so they must be integrated as quickly as possible. “Language is essential, then jobs,” but “they have to integrate… respecting our free and open society.”

The overwhelming majority of Germans, Wulfing said, is in favor of welcoming the refugees, because they realize there is no way to send them “back to the hell they came from.”

Shifting focus to the original topic of the program, Moskowitz played two video clips — one from French Prime Minister Manuel Valls and one by German Chancellor Angela Merkel, giving recent speeches deploring acts of anti-Semitism in their countries, including Merkel’s condemnation of pro-Palestinian rallies that are little more than covers for overt anti-Semitism.

Though France has seen a large number of incidents against the Jewish community in recent years, Barbet said it is a “top national priority” in France to ensure that French Jews feel “they are part of the French identity. France is their home and intends it to be their home for the coming centuries.”

Currently, France has deployed 10,000 soldiers to protect over 700 Jewish institutions in the country. Long-term, the “teaching of tolerance and civic education” is key, and France has “maybe the harshest” laws against anti-Semitic acts.

Wulfing said one of the “pillars of our existence” is Germany’s relationship with and responsibility to Israel, and he considers it “a miracle” that there is a “growing, flourishing, fantastic Jewish community” in Germany.

Germany teaches its youth about the consequences of anti-Semitism and how it paved the way to what happened under the Nazis. One problem, he noted, is that this type of education was not given to refugees, “many of them from regions or countries where there is a heavy indoctrination not only against Israel but Jewish people in general.”

They are paying special attention to that and showing them that “any form of discrimination, but given Germany’s history, anti-Semitism in particular, is not tolerable.”

Failure to integrate the refugees would lead to a “ghettoed minority in our country with extreme views.”

They were asked about comments by some, including Sweden’s foreign minister, saying that the Palestinian situation contributed to the Paris attacks. Barbet dismissed that as a motivation for Daesh, saying “I don’t think they care about Palestinians.”

Moskowitz concluded the program by urging the diplomats to ensure that the international coalition that negotiated a nuclear deal with Iran is vigilant in ensuring strict compliance.