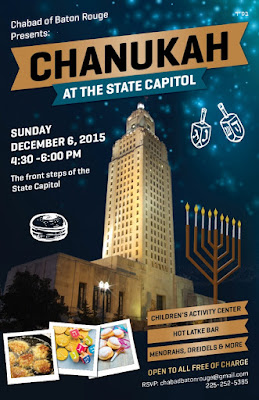 Around the South: Week of November 25

In a story that has gone world-wide, Peter Gold, a medical student at Tulane University, is recovering after being shot while breaking up an attempted robbery near Magazine Street. A suspect has been arrested.

Chanukah is almost here! Here’s a listing of events in the region.

Etgar 36, an Atlanta-based group that takes Jewish teens on civil rights journeys through the South each summer, is doing a journey for adults, Jan. 28 to 31. Stops include Atlanta, Montgomery, Selma and Birmingham. Cost is $350 and just a few spaces remain on the bus.

A Jewish Day School in Greensboro, N.C. received threats of violence and closed for two days.

Verbal and physical attack on a rabbinical student being investigated in Boca Raton, Fla.

Alabama Public Radio did a segment on Jewish life in a Southern college town, in this case, Tuscaloosa.

Southern twist on a Jewish classic? Kitty’s Canteen on New York’s Lower East Side, which is partly owned by Snoop Dogg, has trademarked the Bisgel, a hybrid biscuit and bagel.

Alabama
Birmingham native Michael Schwartz will speak about visual impairment and visual storytelling, inclusion and rising above physical, learning and emotional challenges. He will be at Temple Beth-El on Dec, 5 at 6:30 p.m. for Havdalah and a discussion of his work, the Palette Project. On Dec. 6 he will lead religious school students on a journey about Chanukah and overcoming challenges.

The next OLLI class at Birmingham’s Levite Jewish Community Center will be Photography for iPhones, Dec. 7 at 10:30 a.m. The free class is taught by Kenneth Kuntz, a teacher of photography and computer products.

There will be a Menorah Workshop at the Home Depot on South Memorial Parkway in Huntsville on Nov. 29 at 1 p.m. Reservations are needed.

On Dec. 1 there will be a Chanukah Story Hour for children of all ages at Huntsville’s Barnes and Noble in the Bridge Street Town Center, from 4 to 5 p.m.

NW Florida
The next Torah on Tap in Pensacola will be on Dec. 1 at 5 p.m., at Old Hickory Whiskey Bar.

Mark Elovitz will give an “Update on the Middle East Conundrum,” at Temple Beth Shalom, Fort Walton Beach, on Dec. 4 at 7:30 p.m. There will be a brief Shabbat service before his talk. Elovitz is the director of the Centre for Strategic Geopolitics.

Anna Herman and Adam Orlansky will lead a presentation about Henry S. Jacobs Camp on Dec. 6 at 11:15 a.m. at B’nai Israel, Baton Rouge.

The second annual Henry S. Jacobs Camp Jump Into Jacobs NOLA2HSJ sleepover will be on Dec. 12 from 6 p.m. to 8 a.m. at Temple Sinai in New Orleans. All students in first to fourth grades are welcome to bring their sleeping bags and “experience a night of Jacobs Magic.”

Anshe Sfard will have a special Kiddush lunch after the 9:15 a.m. Shabbat service on Nov. 28, in honor of Joseph Sher’s 100th birthday.

The Temple Sinai Brotherhood will have a program with Josh Colman, son of Cantor Joel Colman, speaking about his experiences as a soldier in the Israel Defense Forces. The luncheon will be at noon on Dec. 7, at Domenica. Reservations are $25 for current Brotherhood members, $45 for all others.

JewCCY and Jacobs Camp present JewBowl, a teens versus adults flag football game, Dec. 5 from 1 to 3 p.m. at the Uptown JCC back field.

Students Supporting Israel at McNeese State will screen “850,000 Refugees: The Untold Story of the Jewish Refugees from Arab Countries,” Nov. 30 at noon at Holbrook Student Union.

There will be a Kendra Gives Back party at Kendra Scott in Baton Rouge on Dec. 2 from 6 to 8 p.m., with 20 percent of sales benefitting B’nai Israel. There will be “sips and sweets” while shopping.

There will be an NCJW Way parlor meeting on Dec. 2 (contace NCJW GNO for location at private home) at 6 p.m., with a panel discussion on race and equity in New Orleans. Speakers will include Kim Boyle, Erika McConduit, Monika Gerhardt and Marsha Broussard.

Shir Chadash in Metairie will have its next Uptown Shabbat and Potluck on Dec. 4 (contact Shir Chadash for location at private home). There will be an early kid-friendly potluck at 5:45 p.m. followed by services at 6:30 p.m. and a vegetarian potluck.

The Chabad Jewish Center in Metairie will have a pre-Chanukah class on the legal, mystical and practical dimensions of the holiday. The class will be Nov. 29 and Dec. 6 at 10:15 a.m.

At the Dec. 4 Temple Sinai Shabbat service in New Orleans, Margaux Schexnider will speak about her recent trip to Washington as part of the Anti-Defamation League’s National Youth Leadership Mission. The service is at 6:15 p.m.

Mississippi
Rabbi Stephen Wylen, visiting rabbi at Beth Israel in Jackson this year, continues his series on Judaism’s Great Debates on Dec. 8 at 7 p.m. with Theodore Herzl vs. I. M. Wise, on “Are the Jews a People or a Religion?” The Jan. 19 debate will be Moses vs. Korach on “The Divine Source of Religious Authority.” On Feb. 2, it will be Geiger vs. Hirsh vs. Frankel on the Three Streams of Modern Judaism. The series will continue until June.

The Mississippi Religious Leadership Conference will have a Peace and Reconciliation Service on Dec. 6 at 5 p.m. at Fondren Presbyterian Church. There will be messages from the Jewish, Christian, Muslim and Unitarian perspectives. All are invited.