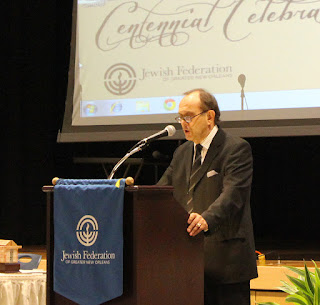 Michael Weil, executive director of the Jewish Federation of Greater New Orleans, announced that he will be stepping down from his position in 2017 and returning to Israel.

In a Chanukah email to the community, Weil said “being away from Israel and my children (and, more recently, grandchildren) has become increasingly difficult” and following the September 2017 annual meeting, when the current Federation administration finishes its term, he and wife Brenda will “say a final farewell to the community.”

Weil arrived in New Orleans in October 2006, a year into the recovery process following Hurricane Katrina and the levee breach, a disaster that displaced the entire New Orleans community for a lengthy time.

Prior to his arrival in New Orleans, Weil had been a policy research fellow at the Jewish People Policy Planning Institute, chaired by former U.S. Undersecretary of State Dennis Ross.

He also had been managing director of Megama Management and Planning Consultants, overseeing strategic planning for Jerusalem, Lod, Kiryat Gat, and other Israeli cities; urban renewal projects throughout Israel, community planning, budgeting, research, and analysis for universities, Israeli Government Ministries, the Jewish Agency, and other public and private entities.

In the fall of 2006, most of those in the Jewish community who were planning to return to the area had done so, leaving the community roughly one-third smaller than it had been before the storm. In his statement, Weil said “The challenges the community faced at that time were difficult ones. It was my privilege and pleasure to work with you then to carve a successful path of recovery and renewal, to be part of an amazing community transformation, and currently, to plan for the best possible growth in the future.”

Through a range of initiatives and support from the national Federation system, all of the New Orleans Jewish community agencies and institutions continued to exist, and the Jewish population, bolstered by newcomers, has now topped its pre-Katrina number.

Weil said he will continue to work with the community “with the utmost energy and enthusiasm, and working with our current leaders and our great professional staff to continue moving the Federation forward. As the time nears, I also look forward to helping facilitate a smooth transition for my successor.”