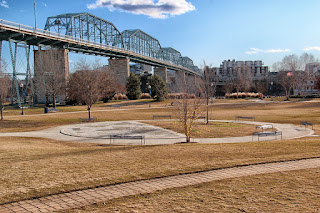 Two vehicles were burned in the parking lot of the Jewish Cultural Center in Chattanooga overnight early this morning.

In a statement, Jewish Federation of Greater Chattanooga Executive Director Michael Dzik said one Federation vehicle was destroyed and another vehicle next to it was badly damaged. These vehicles are used for transporting seniors and to deliver meals to home-bound community members.

“At this time it is unclear as to if this was simply vandalism or potentially a hate crime,” he said. “Initial investigation points to this NOT being a hate crime” but a random act of vandalism. Authorities will nevertheless investigate “all angles.”

Dzik said they will let the authorities “investigate this incident fully before we make any comment regarding the circumstances.”

After the fire was reported, police units were sent to Mizpah, the Federation, B’nai Zion and Chabad for additional security. Also as a precaution, Jewish communities in the region were alerted to the incident through a Jewish Federations of North America service.

There were no injuries and no damage to the JCC.