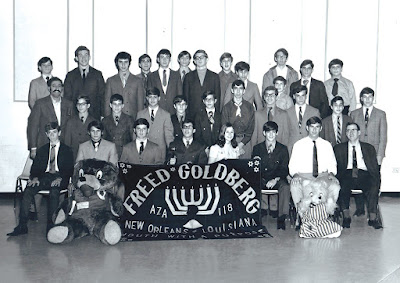 Sam Laufer knew from a young age that he would eventually join BBYO. It was practically a given. His father, Jeff, was a member as were his cousin, uncle and grandfather. The old Harry Laufer AZA chapter in New Orleans was named after his great-great uncle.

“Before I joined BBYO, my father would tell me stories of experiences he had, conventions he attended and friends that he made from BBYO,” said Laufer, president of Big Easy BBYO, the current New Orleans chapter. “He told me about how I could make friends that would last my entire life. He never pressured me into joining, but because of him, I knew I wanted to be in BBYO.”

Laufer knows that his father wasn’t exaggerating, because he can tell just how excited he and his BBYO friends are as they prepare for the upcoming New Orleans BBYO reunion, Feb. 26 to 28. The weekend features Friday night services at Congregation Gates of Prayer, a party Saturday night at Southport Hall and a meet-up Sunday morning at Morning Call in City Park.

The theme of the reunion is “Reconnect, Renew, Rebirth,” and Cathy Kanter Bart, one of the reunion organizers, along with Debbie Bressler, Melanie Blitz and Linda Heiman, said the weekend promises to be one filled with laughter and love as alumni from across the country gather to renew old friendships.

“I am thrilled with the response we are getting,” Bart said. “We are getting calls from people all over the country, people I haven’t spoken to in years. Everybody is excited and making plans to come in and reconnect with old friends. It comes at a great time for our current Big Easy chapter, which is working to grow and again become a strong presence for our local youth.”

BBYO is a youth-led, worldwide group that provides opportunities for teens to develop their leadership potential while cultivating their Jewish identity. Activities include out-of-town conventions, weekend programs, community activism and social gatherings.

Aleph Zadik Aleph was formed in 1923 in Omaha, Neb., as a Jewish high school fraternity. Two years later, AZA was adopted by B’nai B’rith and spread nationally. The Mother Chapter of the South was established in Birmingham in 1927, the year that B’nai B’rith Girls was organized in San Francisco.

In 1944, BBG was recognized by B’nai B’rith, and the B’nai B’rith Youth Organization was formed with both groups. The organization became independent in 2002 and is now known as BBYO, while chapters continue to be known as AZA and BBG. In communities without separate chapters, there are co-ed BBYO chapters.

At its peak in the 1970s, BBYO had three BBG chapters in New Orleans — Susan Frank, Ahavah and Robert Gervis — and three AZA chapters, Freed-Goldberg, Rodfay Shalom and Harry Laufer. Prior to that, Crescent City, Harry L. Ginsburg and Shoshanim chapters were a strong presence in New Orleans. Over time, largely due to a shrinking Jewish population, increasing demands from school and other obstacles, membership dwindled.

By the time New Orleans hosted its last Cotton States regional convention, in 1986 at the Landmark in Metairie, only Freed-Goldberg and Susan Frank existed.

Eventually, BBYO in New Orleans became a thing of the past. But in the early 2000s, with support from local BBYO alumni, B’nai B’rith and the Jewish Community Center, efforts to revive the program in New Orleans led to the birth of the Big Easy chapter. In addition, BBYO Connect was formed to provide middle school students with social and meaningful experiences aimed at serving as a gateway to continued involvement in Jewish life.

Garrett Moore, who as head of teen programming at the JCC serves as director of Big Easy BBYO, sees the reunion as an ideal opportunity to strengthen and invigorate BBYO in New Orleans.

“The event plays a pivotal role in displaying what BBYO has done for many generations of New Orleans teenagers,” Moore said. “It invokes a sense of family and tradition, and we’re looking to bring that back to Big Easy BBYO.”

Moore need only look at the reunion Facebook page to understand the role BBYO played in the lives of so many New Orleans teens. The page features dozens of photos along with reminiscences about this impactful time in their lives.

Eddie Bronston, a member of Freed-Goldberg AZA in the 1970s, created the page, enabling alumni to renew friendships, share memories and make plans for the reunion.

He said being a member of FG, as it was known, was a life-changing experience. It not only introduced him to the concept of tikkun olam, but it led to friendships he still has today. Some of his fondest memories include conventions, athletic competitions, youth-led Shabbat services and socials, many of which culminated with late-night card games.

“Some of my best memories were from the conclaves and conventions where we met kids from all over the South, and we were able to show our spirit and pride for our chapter,” he said. “I also met kids from New Orleans I would not have met otherwise, because it transcended the divisions among Reform, Conservative and Orthodox synagogues.”

Amy Jacoves Kent was a member of Susan Frank BBG from 1975 to 1979. Prior to that, Judaism was merely something she shared with her family on holidays. “When I became involved in BBYO, a light turned on inside me,” she said. “I found a group of Jewish girls and goys who were active in the Jewish community. As I became more involved in Susan Frank, my confidence grew and eventually I became N’siah (president).”

She traveled to regional and district conventions along with national leadership programs and the international convention in Starlight, Pa., in 1978. “I literally met people from all over the world, and I have friendships that have lasted a lifetime,” she said. “Plus the leadership skills and religious lessons I learned are still with me today.”

Moore and Laufer say the reflections and experiences of BBYO alumni can and should serve as an impetus for strengthening the Big Easy chapter.

“We’re at a pivotal turning point into making New Orleans a hub for BBYO yet again,” Moore said.

Laufer added, “I believe it is important to keep BBYO in New Orleans alive because it belongs here, and I think our community needs to do everything in its power to make sure that it stays alive.”