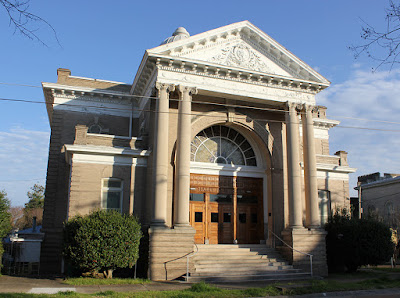 The 2016 Natchez Literary and Cinema Celebration will include an event at historic Temple B’nai Israel.

“Natchez at 300: A River Runs By It” is sponsored by Copiah-Lincoln Community College and the Mississippi Department of Archives and History. The 27th annual conference is being held in conjunction with the tricentennial of Natchez.

This eclectic concert will feature works that reflect a diverse heritage. The event will include ancient Jewish chants, Classical works based on Jewish texts, prayers and songs from Eastern Europe, Western Europe, and Israel as well as modern Jewish forays into folk music, Jazz, Rock and Gospel.

There will be an introduction and remarks on history of Temple B’nai Israel by Terri Tillman.

Other weekend events include a tricentennial luncheon at the Stanton Hall Carriage House and a benefit cocktail buffet at The Elms.

Formed in 1840, B’nai Israel is the oldest Jewish congregation in Mississippi. The building, dedicated in 1905, is on the same site as the congregation’s original 1872 building, which burned in 1904.

Another Jewish aspect to the Natchez tricentennial will be the annual Southern Jewish Historical Society conference, which will be held in Natchez from Nov. 4 to 6.

“Jews in the Southern Hinterland” will explore the experience of Jews living in the smaller cities and rural areas of the South. A call for papers has gone out, with suggestions including the creation and development of Jewish communities in hinterland areas, Jews’ economic role and connection to regional and national trading networks, Jewish religiosity and religious practices in context of the small-town South, cultural assimilation to southern mores, including notions of race and civil rights, and the impact of recent demographic changes on small southern Jewish communities.