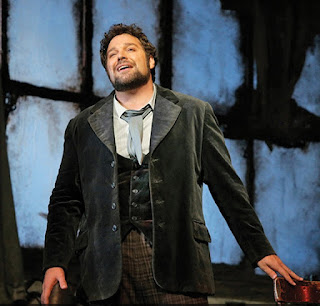 Temple Sinai Cantor Joel Colman said Hymel has burst onto the international opera scene and is “one of the leading tenors in the world now.” While he attended Loyola University, he sang in Sinai’s High Holy Days choir and has maintained a friendship with Rabbi Edward Cohn, who is retiring this year.

Proceeds from the concert will benefit the Edward P. Cohn Rabbi Emeritus Chair and the Temple Sinai Cantor’s Music Fund.

On the concert stage, Hymel appears with the PKF – Prague Philharmonia for concerts in Prague’s Smetana Hall and the Théâtre des Champs-Élysées in Paris, as well as for a special recital in London’s Wigmore Hall.

Hymel is the winner of the 2013 Olivier Award for Outstanding Achievement in Opera for his trio of performances in “Les Troyens,” “Robert le diable” and “Rusalka” at London’s Royal Opera House.

An exclusive recording artist for Warner Classics, his first solo album “Héroïque” debuted at number 3 on the Billboard Classical Music chart, and earned Hymel the coveted Georges Thill Prize by the Académie Nationale du Disque Lyrique and the Newcomer of the Year Award from ECHO Klassik.

Also appearing in the Temple Sinai concert will be acclaimed soprano Irini Kyriakidou, Hymel’s wife. Marcus St. Julien will be the accompanist, and Colman will sing a duet from “Carmen” with Hymel.

Tickets are $35 for general admission, $30 in advance. Student tickets are $10. Patron level is $150, and sponsor level is $250. Patrons and sponsors get preferred seating and a post-concert reception with the artists. Doors and will-call will open at 5 p.m.