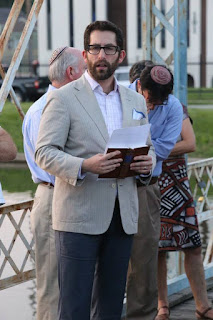 A year of rabbinic changes in New Orleans continues with the announcement that Anshe Sfard Rabbi David Polsky will be leaving this summer.

In a message to Anshe Sfard members on Feb. 24, Polsky said the need for an extended family support structure with two young children led to “the difficult decision to move to Southfield, Michigan in August, after my contract ends.”

Most of his wife Mindy’s family lives in the metropolitan Detroit area, he said, including her parents, two siblings and many other relatives. Visiting family has given the children a different Shabbat experience, being able to play with peers within walking distance.

“As fun and fulfilling as it is to live in New Orleans, we’ve realized that we have to make sacrifices for our children,” he said. “And that nothing replaces family.”

As one who had lived in New York City just about all his life, Polsky said he has been “very fortunate to be part of the New Orleans Jewish community. I don’t know of any other American Jewish communities where every rabbi is a member of the same clergy council. I am very happy to have been spared the inter- and intra-denominational politics that goes on in too many other Jewish communities. Although New Orleans has fewer Jews and fewer Jewish resources, it comes far closer to feeling like a united Jewish community than most others.”

His interview weekend at Anshe Sfard five years ago was during Family Gras weekend, and he was struck by the warmth and hospitality of the community, and the “beauty of such a historic synagogue in such a historic neighborhood.” An Orthodox congregation with a relatively small membership, Anshe Sfard is the remaining synagogue in what used to be a Jewish neighborhood.

Noting the Talmudic teaching that 10 measures of beauty were given to the world, with Jerusalem receiving nine of those measures, Polsky said “I am confident that a sizable portion of this tenth measure was given to New Orleans.”

After their second child was born, the congregation granted him a one-month paternity leave, but “we became even more convinced that having two young children without family support is unsustainable.”

He said his time at Anshe Sfard has been “a real blessing.” He strove to revitalize the small congregation, which as the closest synagogue to downtown and the French Quarter receives a lot of Jewish tourists and conventioneers. “I’ve had the privilege to welcome and host Jews from all over the world and from many different backgrounds. I cannot think of any rabbis whose walk to and from synagogue on Shabbat is as scenic as mine strolling through the Garden District.”

He has also maintained visibility in the community, such as being the rabbi for the Krewe du Jieux, a role that has brought him national attention. He has marched with the Krewe dressed as everything from a roach to Donald Trump.

Polsky said his wife will continue overseeing her Applied Behavior Analysis business in New Orleans, and he plans to visit for Mardi Gras, Purim, Krewe du Jieux activities “or other happy occasions.” Before he leaves, he said he will do as much as possible to accomplish the goal of an eruv in the neighborhood around Anshe Sfard.

He will continue to be “a member of Who Dat Nation” and will “root for my successor to continue the revitalization of Anshe Sfard.”

Gary Remer, president of Anshe Sfard, said the congregation will now embark on a rabbinic search for a replacement, though “no one will really be able to replace Rabbi Polsky.” A candidate who has previously visited the congregation for Shabbat during Polsky’s paternity leave will come to town the weekend of March 12.

Temple Sinai brought in four candidates last month and has narrowed the process to the final two. Shir Chadash brought in a candidate the weekend of Feb. 19, the first of three consecutive weekends with prospective rabbis.