Rabbi Linden named new director of Ramah in the Berkshires 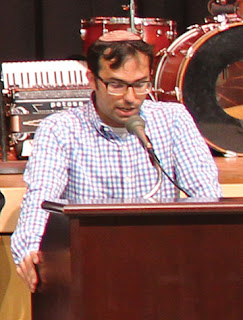 Rabbi Ethan Linden came to New Orleans seven years ago to lead Shir Chadash in Metairie after serving as assistant director of Camp Ramah in New England, in Palmer, Mass.

Now, he is heading back up north to become the new director of Camp Ramah in the Berkshires, in Wingdale, N.Y. He succeeds Rabbi Paul Resnick, who has been director for 25 years, having first been hired as assistant director in 1987. Resnick will become senior engagement and planning director.

Though Shir Chadash’s membership was informed of Linden’s departure on Feb. 10, his new position was not officially announced until after the camp’s board approved his hiring on Feb. 29.

Rabbi Mitch Cohen, director of National Ramah, said the camp “and the entire Ramah movement is blessed to be able to offer this position to Ethan. I have known and worked with Ethan for years, and Ramah Berkshires could not have done better.”

Hugh Pollack, president of Ramah in the Berkshires, said “I am confident that we have made a great choice in Rabbi Linden and look forward to working with him and the Board on bringing Ramah to new heights and to a grand future ahead.”

In his message to the congregation, Linden said he had a “divided soul” over the decision to leave. “I have been privileged to serve as the rabbi of this extraordinary community for nearly seven years, and it pains me to leave this place. On the other hand, I am thrilled to have been honored with the opportunity to take over the professional leadership of Camp Ramah in the Berkshires. It is an opportunity I feel I must take.”

He added, “It has been my honor to have this pulpit, and I know it will be an honor for the rabbi who succeeds me.”

He hopes to build on Resnick’s legacy at Ramah, and “take Ramah to even greater success. Camp Ramah in the Berkshires has a vitally important part to play in the creation of our Jewish future, and I am honored to be a part of this camp and that future.”

Linden will be introduced to the Berkshires community at an April 10 event. He, wife Liba Kornfeld and their three children, Adin, Yona, and Liav, will move to New York in June and he starts as director on Oct. 1.

“I graduated from JTS nearly nine years ago,” he said, “and if someone had told me then that my journey would take me from Palmer to Metairie and then on to Wingdale, I would have laughed aloud. But I am so very glad that it has.”