If you feed them: Jewish food festivals in the area 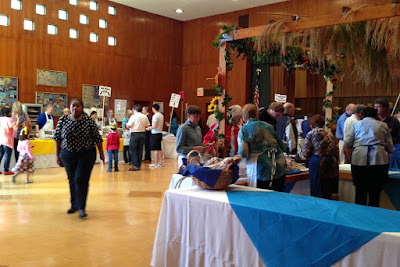 A quieter time at Temple Beth Or’s festival on Feb. 28

With the coming of Spring comes numerous Jewish food events at congregations around the region, including several involving corned beef just in time for St. Patrick’s Day.

The season began with the annual Temple Beth Or Jewish Food Festival in Montgomery on Feb. 28. The line started forming at 7:30 a.m., and by the time the doors opened at 9 a.m. there were well over 100 waiting to get in. Several items were sold out by mid-day.

In Baton Rouge, Beth Shalom will have its 32nd annual corned beef sandwich sale. There will be a making party for volunteers on March 12 at 7 p.m.

The $10 lunches include a ¼-lb. corned beef sandwich on rye, potato chips, dill pickle and homemade brownie. Tuna or egg salad sandwiches are available by request.

Gemiluth Chassodim in Alexandria will have its annual corned beef sandwich sale on March 15 from 11 a.m. to 2 p.m. Packages include a corned beef sandwich on rye, cole slaw, pickle and potato chips for $8. One may dine in, take out, or there is delivery available for orders of 10 or more. Tickets must be purchased in advance, because they sell out each year.

In Monroe, the B’nai Israel Men’s Club will have a kosher hot dog lunch on March 15. The $5 package includes a hot dog, chips and drink. Packages will be available for takeout only, from 10 a.m. to 4 p.m.

The annual Corned Beef Extravaganza at Springhill Avenue Temple in Mobile will be on March 17. The $10 lunches include a ¼-lb. corned beef sandwich on rye, a kosher pickle, New York style cheesecake and bag of chips. Prepaid orders must be in by March 14. Orders may be picked up at Springhill Avenue Temple from 10:30 a.m. to noon, or delivered for orders of 10 or more lunches.

The Jackson bazaar includes a white elephant sale and silent auction. Congregants who donate items to the silent auction will be entered into a drawing for one reserved parking spot for the 2017 Bazaar, which will be the 50th annual.

Temple Emanu-El in Tuscaloosa will have its annual Jewish Food Festival on April 3 from 11:30 a.m. to 1:30 p.m. Box lunches range from $10 to $12, and have brisket, a corned beef sandwich or falafel.

The food sampler bar, which enables one to purchase four tickets for $5 and sample numerous Jewish dishes, will be back, with items including black and white cookies, sweet kugel, knishes, matzah ball soup, stuffed grape leaves, bagel and schmear, blintzes, baklava, rugelach, and hamantashen. New for this year will be a Latke Station.

Temple Sinai in Lake Charles will have its corned beef sale on April 4, with pickup from 11 a.m. to 1 p.m. Tickets are $8 for a ¼-lb. sandwich on rye, chips, pickle and cookie. Deliveries of 10 or more lunches is available. An assembly party will be held on April 3.

Dothan’s Temple Emanu-El will have its Deli Day on May 4, with lunch packages going for $12.