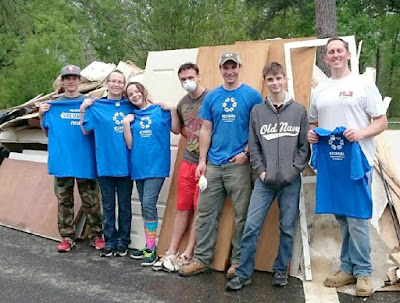 NECHAMA: A Jewish Response to Disaster has deployed to the Shreveport area following extensive flooding from record rains in mid-March.

A slow-moving storm dumped over two feet of rain in some areas, with widespread flooding in at least 26 Louisiana parishes. Additional flooding has affected Texas and Mississippi.

By March 18, several parishes had requested assistance from NECHAMA, and on March 21 the deployment began “at least initially” in Bossier and Caddo parishes.

At the height of the flooding, 25,000 were under mandatory evacuation orders.

NECHAMA is leading volunteer teams in mucking and gutting out flooded homes, removing flood-damaged possessions, tearing out walls, carpets and floors. Currently, there are over 650 flood-damaged homes on the list just for Caddo Parish, mainly in underserved areas.

Kathy Plante, director of the North Louisiana Jewish Federation, sent out a community notice on March 21 that NECHAMA was coming, urging volunteers and contributions from the community. Further announcements were made at Purim celebrations and the community Hadassah service at B’nai Zion on March 25.

The community housed the initial team and coordinated meals for the first several days, until they could establish a home base at a church that had showers and a kitchen.

A call has gone out nationally for volunteers to help with the relief effort, and for donations to help support the projects. On March 25 an Americorps team arrived and was settling in at NECHAMA’s base of operations.

According to NECHAMA, they are “the only voluntary organization currently providing flood cleanup assistance day-to-day in the Caddo area.”

The organization is still coordinating volunteers in Texas a year after floods hit part of the state.

Based in Minnesota, NECHAMA began with a group of friends who went to Des Moines to volunteer after flooding in 1993. The group has been in the region many times, from Hurricane Katrina to the 2011 tornado outbreak in Alabama and Mississippi.

B’nai Zion in Shreveport had several members report flooding. Educator Helaine Braunig said “at least one religious school family had to evacuate their home in Bossier, and one of our former students who is now a resident of Monroe had floodwaters in her home.”

Rabbi Yonatan Sadoff of Magen Avraham in Omer, Shreveport’s sister community in Israel, sent a prayer of safety for the communities of northern Louisiana.

B’nai Israel in Monroe reported a leak in its roof from the 24 inches of rain, affecting the archive room but losses will be “at a minimum” thanks to quick work of interns.