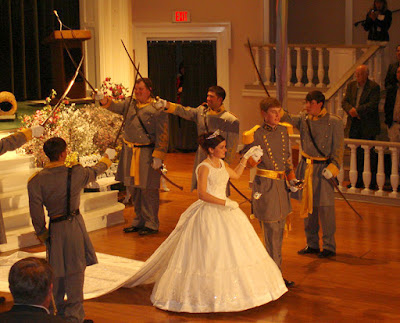 Madeline Iles will speak about changing the Historic Natchez Tableaux (seen here in a 2007 file photo) last year, to no longer romanticize the pre-Civil War South, and to include black perspectives on slavery. File photo.

Three Mississippians — two who have been active in the Civil Rights movement since the 1960s, and one who has made a more recent impact — will be recognized at Millsaps College’s Rabbi Perry Nussbaum Civil Justice Awards Dinner.

The Nussbaum dinner and lecture series honors the former rabbi of Jackson’s Beth Israel Congregation, who was active in the civil rights struggles of the 1960s and was the target of Klan bombings at Beth Israel and at his home.

Each year individuals are recognized for their selfless contributions to the civil rights movement in Mississippi and beyond. Two years ago, the award and lecture series was expanded to honor more contemporary work around civil and social justice issues.

The April 14 dinner will honor Madeline Iles, Constance Slaughter-Harvey and Hollis Watkins. The event will be at the King Edward Hotel ballroom, with a social hour at 6 p.m. and dinner at 7 p.m.

On April 15, Iles will deliver this year’s Nussbaum Lecture, “Change from Within: Bringing Balance and Truth to the Historic Natchez Tableaux” at noon in the Gertrude Ford Academic Center at Millsaps. The lecture is open to the public.

Iles, a senior at Millsaps, was one of the two queens at the Historic Natchez Tableaux in 2015. The Tableaux, part of the Natchez Spring Pilgrimage since the 1930s, was a show that depicted a “fairy tale” view of Natchez before the Civil War.

While blacks had once taken part, during the awakening of the civil rights era of the 1960s, they abandoned the show that they felt glorified slavery, leaving the cast all-white.

Iles had taken a Mississippi history class at Millsaps in her sophomore year, causing her to examine what she could do to help and what her role was in the state’s civil rights atmosphere.

She was able to secure internships with Rev. Ed King, who was involved in Jackson’s movement in the 1960s, and with Clarion-Ledger reporter Jerry Mitchell, whose reporting on civil rights led to the reopening of the case that resulted in Byron De La Beckwith being convicted for the murder of Medgar Evers.

In 2009, local best-selling novelist Greg Iles, father of Madeline Iles, had urged Natchez leaders to make changes that would make Tableaux more accurate historically. As a child, he had carried the Confederate flag in the show, not realizing the truth about that era. After being seriously injured in a 2011 car accident, he wrote the acclaimed “Natchez Burning,” a novel about of white supremacist violence in the 1960s, set in Natchez.

When Madeline was asked to be one of the two queens, she sought changes that her father had urged, and the garden club, facing dwindling crowds in recent years, was receptive to the idea of including the black experience in the show.

In a Founders Day speech at Millsaps last year, she said the show was “one of the most politically incorrect spectacles to survive into the 21st century.”

In the weeks leading up to the 2015 performances, Greg Iles tossed many old scenes, redid several others to show the reality of slavery and wrote a new ending that dealt with the reality of Southern defeat in the war.

They also faced the challenge of recruiting skeptical local blacks to fill roles in the reworked show.

During all of this, she worked on a Millsaps honors project that will result in a documentary film about the historic change.

She began her career with the Lawyers’ Committee for Civil Rights Under Law and then established her private law practice in Forest. In 1984, she became Assistant Secretary of State for Elections and Public Lands with Secretary of State, Dick Molpus.

In 1998, the University of Mississippi’s Black Law Student Association was named in her honor. Tougaloo College inducted her into its alumni Hall of Fame in 2000 and named her its Alumna of the Year two years later. In 1999, Thomas and Ann Colbert honored her with the establishment of the Constance Slaughter-Harvey Endowed Chair in Political Science/Pre-Law at Tougaloo.

Hollis Watkins was the first Mississippi student to become involved in 1961 in the Mississippi Voting Rights Project of the Student Nonviolent Coordinating Committee.

Born near Summit, he attended Tougaloo and became involved in voter registration efforts in McComb. He was involved in the fist sit-in there, and was jailed for over a month.

CBS News gave him hidden equipment to record efforts to register voters, the footage was aired at the time and recently released on DVD. He was active in Freedom Summer and the Mississippi Freedom Democratic Party at the 1964 Democrat convention.

A founder of the Civil Rights Veterans of Mississippi, he is co-founder of Southern Echo, which builds intergenerational grass-roots community organizations for African-Americans.

The awards and lecture series are underwritten by John Bower, a close friend of Nussbaum’s.