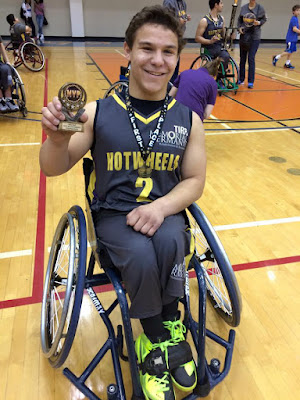 Abraham Hausman-Weiss displays his MVP award at the 2015 conference championship.

Abraham Hausman-Weiss will be coming back to Alabama, this time as a highly-touted athlete for the University of Alabama.

Regarded as one of the leading players in the country in wheelchair basketball, Hausman-Weiss signed a letter of intent on April 5, giving him a full scholarship to Alabama to play for the Alabama Adapted Athletics’ men’s wheelchair basketball team. The ceremony was held at the Emery/Weiner School in Houston, where he will graduate in a few weeks.

In February, at the Varsity Regional Tournament in Tulsa, he was conference MVP, MVP of the championship game, won the Academic All-Conference award and the Commissioners Award for the student with the highest GPA, while leading the Hotwheels to their sixth consecutive Southwest Conference championship.

In the conference championship game on Feb. 28, a 60-44 victory over the Dallas Junior Mavs, Hausman-Weiss had 31 points.

Ham called Hausman-Weiss “the best high school wheelchair basketball player in the United States” and the No. 1 recruit of the 2016 class. “He’s the hardest worker I have ever coached,” he said.

Born in Los Angeles, Hausman-Weiss was 19 months old when the family moved to Birmingham. He attended Birmingham’s N.E. Miles Jewish Day School before moving to Houston in 2011 when his father, Rabbi Scott Hausman-Weiss, became senior rabbi of Congregation Emanu-El in Houston. Rabbi Hausman-Weiss had been director of adult Jewish outreach at Birmingham’s Temple Emanu-El since 1999. In December 2013, he became the rabbi of the new Shma Koleinu congregation.

Hausman-Weiss was born with spina bifida. He began swimming and doing track and field at a young age at Lakeshore Foundation in Birmingham, the largest Olympic and Paralympic training center in the country. In first grade he won first place in numerous national track and field events, including a national record in discus.

In first grade, he saw the Lakeshore wheelchair basketball team play and knew that is what he wanted to pursue.

Before last year’s tournament, Hausman-Weiss commented, “I love the comradery of this team. When we moved here from Alabama I was looking for a team and started reading about the Hotwheels and thought, wow, they’re a really good team.”

Houston Jewish community members also on the Hotwheels with Hausman-Weiss are the Berry brothers, Peter and Aaron. In 2011, they were paralyzed in a wreck that killed their parents, Robin and Joshua Berry. During their rehab at TIRR their aunt brought them to a Hotwheels game, where they met Hausman-Weiss. Having played basketball before the wreck, they joined the Hotwheels the next week.

In August 2011, Hausman-Weiss had spoken at Beth Yeshurun Day School, where the Berrys attended, giving advice to the students on how to treat the Berrys when they would return to the school a few weeks later.

The Alabama program began in 2003 with a women’s wheelchair basketball team, and a men’s team was added in 2006. They compete in the National Wheelchair Basketball Association.

On March 12, the third-seeded Alabama men lost the national championship game as the University of Wisconsin Whitewater won its third national title in a row.

University President Stuart Bell recently said “the University of Alabama will be the first school in the country to have an arena dedicated strictly to collegiate adapted athletics.”

After Hausman-Weiss’ signing ceremony, it was off to Louisville for this year’s National Wheelchair Basketball Association tournament, which features 88 teams in different age divisions. The TIRR Hotwheels will be seeking to defend their national title, coming in as the No. 3 seed among the 16 junior varsity teams.

The tournament will be held April 7 to 10.