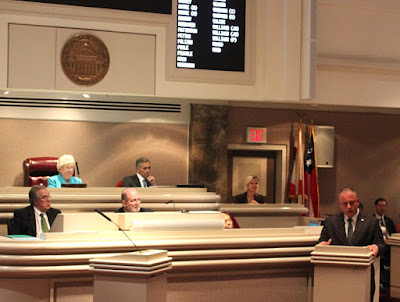 Hilik Bar, the Deputy Speaker of the Knesset, has a message for Alabama: Thank you.

Bar, said to be the highest-ranking Israeli official ever to visit the state, spoke to a joint session of the Alabama Legislature on April 7. He was invited by Lieutenant Governor Kay Ivey, who he met with before his address.

Afterward he also met with House Speaker Mike Hubbard, who said “the vast majority of Americans will always stand with Israel.”

Ivey said “Alabama has a long and proud history of support for the State of Israel,” which Bar spoke about in his address.

Bar, who has also spoken to the Ohio Legislature, said he is traveling to speak against the boycott-Israel movement known as BDS, for Boycott, Divestment and Sanctions, “and what is the intention — it’s not promoting human rights.”

Bar is a member of Zionist Union, the main opposition party in Israel’s government, formed by a merger of Labor and smaller center-left parties before the last election. The party has 24 seats in the Knesset.

Bar started his message to the Legislature by saying that he is the grandson of the only member of that branch of his family to survive the Holocaust.

While that was happening, “it was the great state of Alabama that stood as a great beacon of light among nations, and stood up for the Jewish people.” In 1943, the Alabama Legislature unanimously passed a resolution expressing support for a Jewish state in the land of Israel, “the first and only state at that time to clearly state its support.

“It is by the grace of God I am able to stand here and extend a hand of friendship and partnership,” Bar said. “It is my pleasure and my duty to thank you, the people of Alabama, for that historical resolution.”

That commitment continues, as Alabama unanimously passed a resolution in February denouncing the BDS movement and reaffirming support for Israel.

Bar said BDS attracts supporters through nice slogans, but BDS is “not just a movement of protest” but one that calls for “the total destruction of Israel and the people of Israel.”

Another bill, which would prohibit Alabama government entities from entering into contracts with companies that boycott individuals or nations “with whom this state enjoys open trade” passed the Senate unanimously just before Bar’s address. The bill, which does not explicitly mention Israel but would have the effect of barring contracts with those who boycott Israel, had its second reading in the House on April 13 and is pending its third reading.

Bar spoke about how Israel and Alabama are on the front lines in the fight against terrorism and defending justice. He spoke of the desire for peace in the region while acknowledging “we live in a tough neighborhood.”

In strengthening ties between Alabama and Israel, Bar said “there are many opportunities for mutual projects and further cooperation,” mentioning the high tech, medical and agricultural fields in particular. “The sky is the limit. Let us do more to explore the possibilities.”

While the delegation was in Ivey’s office, Alabama Supreme Court Justice Tom Parker informed the group that Abe Berkowitz will be inducted into the Alabama State Bar’s Alabama Lawyers Hall of Fame next month.

The announcement about Berkowitz, who died in 1985, led to a discussion of his activity on behalf of Israel, which included leading the effort to pass Alabama’s 1943 resolution about a Jewish state.

Berkowitz was also involved in the secret Sonneborn Institute, a small group of individuals who smuggled war materiel to the Haganah for Israel’s War of Independence.

Elner noted that Schwimmer’s last act of service to Israel was co-founding ILI with him, and was full of praise for Schwimmer as a mentor and role model. “He trained me in my commitment for Israel,” Elner said.

Berkowitz joins Edward Friend Jr. as the Jewish members in the Hall.

In Georgia, Elner and Bar met with the lieutenant governor, who expressed support for a Georgia-Israel Leadership Initiative that would provide funding to bring Georgia students to Sderot for leadership training.

Bar called ILI “one of the most important things happening now in Israel.” While there are other leadership development institutions, Bar said he was attracted to ILI because of its decision to be in Sderot, a place routinely under threat from Gaza, rather than the safer confines of Jerusalem or Tel Aviv.

Elner and Bar also attended events with the Jewish communities of Montgomery and Huntsville, and spoke at Calvary Assembly.