Rabbi Edward Paul Cohn: “This is where I was really called” to be 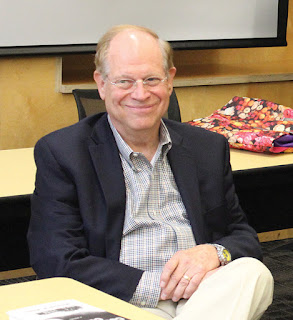 The first time Rabbi Edward Paul Cohn looked out from the pulpit of Temple Sinai in New Orleans, the vast historic sanctuary was empty.

It was 1979 when Cohn, the rabbi at Beth Israel in Macon, Ga., was visiting New Orleans for the wedding of a congregant’s son who had gone to the Tulane School of Medicine. “I had known of the historic significance and uniqueness of Temple Sinai” and wanted to see it while he was in town.

He was “drawn to it as a major congregation in the history of our movement” and “practices and attitudes I thought could well match up with my own.”

Melanie Feldman brought him to tour Sinai, where he thought “this was the place I needed to be.” While on the pulpit, he turned to his wife, Andrea, and said “if we ever get a chance, I want to come here.”

Now, 29 years later, Cohn is describing his time at Temple Sinai as “a complete and comfortable fit.” This summer he is stepping down as senior rabbi at Temple Sinai — but he’s not going away.

“I love being a rabbi and I think I can be very useful,” so he will continue to be active in community work on behalf of Temple Sinai, look for teaching and preaching opportunities and be available for life-cycle events. He will also maintain a dialogue with his successor as a resource so the new rabbi “will have a clear understanding of how we have come to be who we are as a congregation” as the new rabbi leads Temple Sinai in the 21st century.

“I’ve wanted to be there for the person who follows me. It’s what you do when you love something,” he said.

Naturally, when a new rabbi arrives there will be some changes and a time of adjustment. He also wants to help the congregation adjust to someone new, who will have new ideas. “No one expects a clone of Cohn,” he said.

Cohn reflected that when he arrived, he felt there were some changes that needed to be made, “but I appreciated where they were.” The congregational leadership “knew they needed to make some changes,” and some of today’s leaders “have the same thought” now.

A native of Baltimore, Cohn graduated from the University of Cincinnati, then was ordained at Hebrew Union College-Jewish Institute of Religion in 1974. He later received a Doctor of Ministry degree from St. Paul School of Theology.

He started as an assistant rabbi at The Temple in Atlanta, followed by his pulpit in Macon from 1976 to 1979, the New Reform Temple in Kansas City and Temple Sinai in Pittsburgh before moving to New Orleans.

In addition to the historic orientation of the congregation, he was also attracted by how the congregants were “so decent.”

Working with Cantor Joel Colman for 17 years “has been one of the greatest pleasures of my life,” he said. “We’ve accomplished things together we’d never imagined we would be able to do.”

Temple Sinai is regarded as a liberal congregation. With the backdrop of today’s societal fight over same-sex marriage, Cohn has officiated at such unions. It was very early in his tenure that he delivered a sermon entitled “Adam and Steve.” As sermon titles are displayed on the marquee outside, “it stopped traffic on St. Charles Avenue,” he said.

Even before Cohn arrived, the congregation was known for its inclusion of interfaith couples, long before even fellow Reform congregations did. “We did not have any ambivalence or uncertainty over officiating at interfaith marriages,” though not under every circumstance. The previous two rabbis officiated interfaith weddings, “so I wasn’t anything new.”

“We have integrated interfaith married couples completely into the life of the congregation,” Cohn said. At Bar or Bat Mitzvahs, the non-Jewish grandparents take part in the generational passing of the Torah. “Somewhere along the line, they were cooperative. They helped make the marriage work” and should be recognized for enabling the raising of Jewish children.

In the greater community, he points with pride to the Holocaust memorial at Woldenberg Park on the riverfront, which he spearheaded over several years until it was built. “I’m very proud of it,” he said, noting that it draws a “remarkable” 700,000 viewers per year.

Cohn was also founding chairman of the City Human Relations Committee, which has been involved in numerous highly-charged issues over the years.

The committee was active in moving the Liberty Monument, which had been in the neutral ground on Canal Street. The 1891 monument’s origin was to honor white supremacy in the state, though by 1993 other inscriptions had been added. Today, the monument is between a parking deck and floodwall, away from the crowds.

Reflecting on today’s battle over Confederate monuments in the city, Cohn said “we really anticipated the moving of the monuments 20-some years ago.”

He also faced down Klan leader David Duke at a city council meeting.

As with anyone who has been in New Orleans more than a few years, Katrina was a major event in Cohn’s rabbinate. Much has changed, he said, “fortunately a lot of it for the better.”

He considers the 18 years he was in New Orleans before Katrina to be “in preparation for dealing with the challenge.”

That was “a time of bonding with people at a depth that was just unexpected and uncommon,” he said. The spirit of working together across congregations and organizations continues.

Now, he is looking forward to the celebration of New Orleans’ tricentennial in 2018, having recently been appointed by the mayor to be the Jewish community representative on the tricentennial’s cultural diversity committee.

Temple Sinai’s Gala on May 21 will be honoring Cohn for his 29 years of service to the congregation. There will be a patron party at 6:30 p.m., followed by dinner and cocktails at 7:15 p.m., special presentations and a silent auction. The event is black tie optional. Tickets are $150, or $75 for those under 35 years of age. Patron levels start at $275.