Abe Berkowitz inducted into Ala. Lawyers Hall of Fame 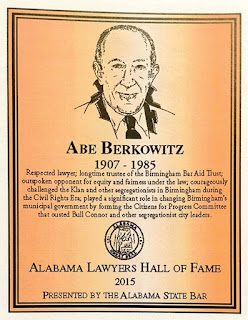 On May 6, Abe Berkowitz was inducted into the Alabama Lawyers’ Hall of Fame in a ceremony at the Heflin-Torbert Judicial Building in Montgomery.

Berkowitz is remembered as one of Birmingham’s earliest progressive activists, promoting both economic expansion and social justice throughout his career. A child of Jewish immigrants from Lithuania, he was born in Meridian. The family ultimately settled in Birmingham, where his father ran a small retail business.

Berkowitz received his law degree in 1928 before reaching the age of 21 and began practicing immediately after the Alabama Legislature removed age restrictions.

He was an outspoken opponent of the Ku Klux Klan and sought to establish equality under the law, with frequent letters to local newspapers. He supported an anti-masking bill that was aimed at the Klan, and opposed Birmingham Police Commissioner Bull Connor.

In a speech at Miles College, he recounted two incidents from 1913, when he was in first grade, that shaped him — the railroading of Leo Frank in Georgia for the murder of a girl and his father urging him to write a letter to Georgia’s governor on his behalf; and how he cried after seeing a trusted caretaker of his humiliate a young black girl who was on her way to the store by using the n-word at her.

Son Richard Berkowitz spoke at the ceremony, He said his father earned the recognition “because he was willing, along with others, to speak out when doing so was not popular, but that was who he was.”

In the midst of the city’s racial turmoil in 1962, Berkowitz was a leading member of the Birmingham Bar Committee that recommended a change in the form of Birmingham’s city government from its three-member Commission to a Mayor-Council system, organizing a surprise petition drive. The vote was successful, bouncing Connor from office.

A passionate Zionist, Berkowitz spearheaded the famous 1943 Alabama resolution that called for the establishment of a Jewish homeland in Palestine, working with Rep. Sid Smyer and Sen. James Simpson.

Alabama Supreme Court Justice Tom Parker, in announcing the induction during Knesset Deputy Speaker Hilik Bar’s visit to Montgomery in April, noted that “Simpson was Bull Connor’s attorney, and Simpson wrote some of the segregation resolutions. Berkowitz was on the other side — but those two could come together on the important issue of Israel.”

Berkowitz was also asked to be in the secretive Sonneborn Institute, a group of 17 Americans who met with David Ben-Gurion in New York and then fanned out across the country on clandestine efforts to aid the Jewish fighters working toward Israel’s independence.

In his book “In the Shadow of Hitler: Alabama’s Jews, the Second World War and the Holocaust,” Dan Puckett notes that Berkowitz organized Birmingham’s Zionists. “They raised funds and ‘collected all manner of goods from truck loads of helmets to a contribution of 3,000 forks from Isadore Mazer.’ Mark Elovitz notes that ‘the Kimerling family lent a truck with a driver to the cause. The truck was loaded with tires and the tires’ inner-tubes were stuffed with guns and pistols and shipped to New York to see that the ‘cargo’ would not be apprehended’.”

In 1967, Israel awarded Berkowitz the Israeli Freedom Medal “because of his services to the ZOA and Israel.”

Berkowitz also helped establish the Birmingham Bar Association Aid Trust, which set up a fund for lawyers in distress and for which he served as a trustee for more than 30 years.

Richard Berkowitz said he thinks his father, who died in 1985, “would be saddened to see how we have regressed in terms of black-white relationships, and the radicalization of campus life, because dad was a great admirer of Hugo Black ‘s views on free speech” and helped Black’s son become a prominent labor attorney.

Also inducted were Reuben Chapman, Martin Leigh Harrison, Holland McTyeire Smith and Frank Edward Spain. Each inductee must have been deceased at least two years at the time of their selection. The first class was inducted in 2004; there are now 55 members.

“Each of these inductees has played a pivotal role in the history and legacy that we as attorneys leave behind,” said Alabama State Bar President Lee H. Copeland of Copeland, Franco, Screws & Gill of Montgomery. “It’s an honor to pay tribute to their lives and the work they did.”