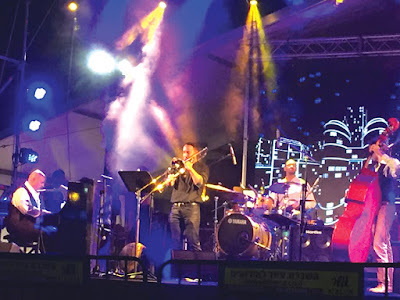 Rosh Ha’Ayin and its partnership with New Orleans had the opportunity to shine before the world in April, as Partnership2Gether started its 20th anniversary Israel mission with a jazz party and dinner by New Orleans chefs in Israel’s self-declared city of music.

The Partnership2Gether Mega-Event began on April 4, with about 43 communities from around the world participating.

Jewish Federation of Greater New Orleans Executive Director Michael Weil said P2G is “the grandchild of Project Renewal,” which began in the late 1970s by Prime Minister Menachem Begin. Under Project Renewal, neglected development towns in Israel were paired with Jewish communities around the world in an effort to spark revitalization.

Rosh Ha’Ayin was also paired with Birmingham under Project Renewal, the two now have a formal sister city relationship.

Weil said P2G is more of a “people to people approach” in bringing Israelis together with members of Jewish communities around the world.

About 600 attended the opening party, held outside the Rosh Ha’Ayin Music Conservatory. Jason Marsalis, Matt Lemmler and Martin Masakowski headlined the concert, while the chefs on the trip were Zachary Engel, chef de cuisine of Shaya, and Chris Lusk, executive chef of the soon-to-reopen Caribbean Room at the Pontchartrain Hotel.

In 2014, Lemmler was one of the musicians for Music Over Sirens benefit in New Orleans for the emergency campaign for Israel during the Gaza operation.

After the long flight to Israel, Engel and Lusk headed straight to Rosh Ha’Ayin, where a large tent was set up outside the Conservatory for them to prepare New Orleans and Israeli specialties.

“It was kind of wild — you are dazed from the plane and you have all this food to cook, the time is flying by and you become conscious again” as the crowds come in to be fed, Engel said.

The menu included New Orleans dishes, such as gumbo and jambalaya, and Israeli standards.

Lis Kahn credited “our very strong and very hard-working partners in Rosh Ha’Ayin who worked very hard to make sure we had it” there.

For the next three days, the mission toured partnership communities from Nahariya and Bet Shean to Ashkelon. While Kahn said they like to think of the New Orleans-Rosh Ha’Ayin partnership as the best in existence, on the mission they did see “there are many others that have great relationships and do many things.”

Ana Gershanik, on her first trip to Israel in 17 years and traveling with her son, Esteban, on his first visit, said the country seemed “much more sophisticated” than 17 years earlier.

She said they visited “Keshet Eilon Music Center in Kibbutz Eilon, devoted to training young violinists, and Kibbutz Ga’aton, with a fantastic Contemporary Dance Company that travels around the world; Galilee Medical Center with Israel’s first Underground Emergency Department; a school in Kiryat Gat where we danced and interacted with the children; the Etgarim organization for children and adults with disabilities; a community garden for Ethiopian families and Moshav Netiv Ha’asarah, 400 meters from Gaza where we pasted colorful mosaic pieces embedded with our personal prayers at the decorated wall surrounding the Moshav.”

The closing event was at the Shimon Peres Center for Peace, with Peres and Natan Sharansky.

While the Federation group traveled the country, the New Orleans chefs and musicians stayed in Rosh Ha’Ayin for home hospitality and did workshops and classes.

Kahn said the festival “has been very well attended” over the years. The P2G opening ceremony “was a natural outgrowth” of it and “it worked out really well.”

The musicians played at the Schneider children’s hospital cancer ward in Petach Tikvah and held sessions at Begin High School and the music conservatory in Rosh Ha’Ayin. Lemmler referenced the universal language of music, and observed that “They seem to know a lot of the New Orleans tunes we were doing.”

While the concerts were great, Lemmler said “it’s really playing with kids and for kids, and for sick children, that’s always uplifting for us.”

The chefs held a cuisine workshop for young adults in Rosh Ha’Ayin, among other classes.

On the evening of April 7, after the P2G mission was over, the groups reunited in Rosh Ha’Ayin and the Federation delegation also had home hospitality.
The next day they had a special tour of Tel Aviv, including a “graffiti tour” of the southern part of the city.

For Shabbat dinner on April 8, numerous Rosh Ha’Ayin families brought dishes for a huge potluck festival in the garden of the Katzir family, as the chefs were told to take the evening off.

For Engel, observing Shabbat that way was a special treat. Growing up the son of a rabbi, he went to services every weekend, but with his duties at Shaya rarely gets that experience.

The New Orleans musicians were joined by locals as the dinner went well past midnight.

On April 9, the group went to Nazareth, where a highlight was going to a field kitchen set up in the forest, and preparing a meal there. “We even made fresh pita out in the wild,” Weil said.

The next day there was a Jerusalem trip, then the musicians played at Shalbul, a Tel Aviv club, that night.

Lemmler said the chance to have home hospitality “was a beautiful experience… our host families were incredibly gracious and loving.”

Engel also said the best part of the trip was staying in homes during their time in Rosh Ha’Ayin. The musicians were housed with families involved in local music, while he stayed with a Yemenite family and had the opportunity to experience Yemenite cuisine “organically” from people who have been doing it their entire lives.

“Since I started cooking Israeli food, the Yemenite cuisine is a huge draw for me because it has been so isolated” and hasn’t made it into the Israeli mainstream. There are relatively few Yemenite restaurants, most people experience it as home cooking.

He mentioned that Shaya has some Yemenite influences on its menu, and “they were so impressed that traditional Yemenite food was on the menu of our restaurant in New Orleans.”

While there, he learned how to make kubana, a traditional Yemenite bread, and bought the proper pans for it. When he gets some time to perfect it, “our pastry chef and I are going to start working on it as an additional bread service” at Shaya.

The family he stayed with is one of seven siblings. On Friday, he went to their mothers’ house, where she still makes a full Shabbat complement for all of her children’s homes, starting early in the morning. “Eighty years old and making food for multiple generations,” he commented.

During the final four days of touring, he visited numerous markets and loaded up on authentic spices, so much that he had to borrow a suitcase to bring back “super high-quality stuff we hadn’t seen before.” The moment he got back to Shaya, “we started tweaking recipes.”

He also enjoyed watching Lusk discover the various Israeli flavors for the first time. “Watching him fall in love with Israel was the second most rewarding aspect” of the trip, Engel said.

As the trip marked the first 20 years of P2G, it was also time to look forward to evolving the relationships.

Kahn said they will work with the New Orleans young leadership group to develop the partnership, and “with that in mind we are having a lawyer exchange.” They are also looking at a start-up and entrepreneurial exchange, as the music and food aspects are “so well engrained now. Rosh Ha’Ayin people know the musicians here, they can pretty well do it.”

Through P2G, Witrock said, “Israeli participants over the last 20 years have really gotten to make life-long American friends and see American life uniquely, especially Jewish-American life. Israeli women have seen for their first time women going up to the bima for aliyot, some ending up in tears at the pluralistic opportunities afforded women here in America. At the same time the partnerships have given Jewish Americans to see how diverse Israeli life is.”

Gershanik said the trip “was the best way to visit Israel and get acquainted with each aspect of the life there. It was a moving experience for my son’s first trip to the Holy Land.”

Weil called the trip “a great mixture of the things we’re known for — food and music, with the great feeling of people to people, old friendships and new friendships.”

“We play very beautiful music together. And we eat well together,” Kahn said.

Reflecting on the Shabbat potluck dinner, Engel spoke of the Yemenite cuisine, the wine and Arak, the musicians jamming on the back porch with everyone who could play music or sing joining in, until all hours of the night. “There’s something very Israeli about that. It’s also very New Orleans. You feel at home in both respects.”