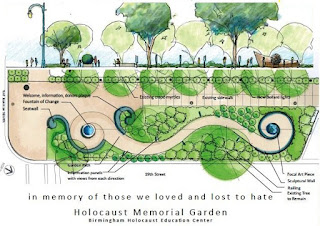 A routine funding request before the Birmingham City Council regarding a planned Holocaust memorial in Birmingham passed unanimously on June 28 — but the week before was anything but routine when the item first came up.

The item before the Council called for a $45,500 allocation, transferred from the Mayor’s Office, Professional Fees for Youth Services budget to a non-departmental capital improvement fund, for the fiscal year ending June 30, 2016.

The memorial is being planned by the Birmingham Holocaust Education Center for a “small pocket park” along 19th Street between Third Avenue North and the alley to the north. A BHEC fundraising campaign is planned to raise the estimated $550,000 cost privately; the city funding was to remove existing structures and clear the site.

The city’s Design Review Committee reviewed and approved a conceptual design for the memorial in 2014. It has a “Make a Change” theme with a walkway from the Fountain of Change, a floating granite sphere, to a focal art piece. A sculptural wall along a pathway between the two will have educational panels on the effects of prejudice and stories of heroism.

According to City Council records from June 28, the Council’s delay from June 21 was “so that Councilors could gain a full understanding of the funding source for this project and obtain information on the non-profit organization that is responsible for overseeing it.”

At the June 21 meeting, after the item was introduced, Councilor Sheila Tyson questioned if the memorial was “for dead people,” because she had tried to get city funding for Shadow Lawn cemetery and was told that was not permitted. “I thought we couldn’t give money to Shadow Lawn. What’s the difference?… Dead is dead.”

Tyson then said the money she wanted to go to Shadow Lawn was going to a non-profit, and “Shadow Lawn is doing the same thing they’re doing.”

Shadow Lawn, an African-American cemetery, is located just south of Elmwood Cemetery and is in Tyson’s district. It dates back to the 1930s and has over 100 Civil War veterans, and Michelle Obama’s great-great-grandfather. The cemetery went bankrupt in 2000, and a non-profit association took over in 2005. For years, Tyson has sought city assistance for the cemetery.

At the meeting, Tyson erroneously referred to Shadow Lawn as the oldest cemetery in the city, the state and even the nation at different points during her questioning.

Thomas Bentley, a deputy city attorney whose parents are buried at Shadow Lawn, said “the distinction is based not upon the fact that there are memorials in Shadow Lawn and this is a memorial, the distinction may be based upon Shadow Lawn is an entity of the transaction of private business whereas this type of memorial is what the courts call government speak, it’s an expression of the city about remembering something.”

Assistant City Attorney Jim Stanley called the memorial an economic development project. “Other cities have these types of memorials and are listed as tourist attractions.”

Tyson said she did not see a difference between Shadow Lawn and the planned Holocaust memorial, then said “I see the difference now… but I am going to leave that right there.”

Councilor Lashunda Scales then started her remarks by saying “I know the difference. The difference is the haves and the have nots. I understand.”

Scales asked whether the site would be a Holocaust memorial or a cemetery. When asking why the funds were coming from youth services, she said “I respect my Jewish brothers and sisters. We share a similar story” but said teaching the city’s youth about their past, through visits to places like Arlington and the Civil Rights Institute, is a priority. “I don’t have a problem remembering my Jewish brothers and sisters. I have a problem when we don’t remember our own, and we get the results we do.”

Councilor Steven Hoyt suggested the city provide a memorial at the entrance to Shadow Lawn, which would be permissible for the city to do.

The proposal was tabled for a week so more information could be gathered as to the rationale for the funding shift, and to get more information on BHEC. Scales said she would like to see who “this non-profit has on the board because this will be very telling.”

The BHEC was “surprised and disappointed” by the misunderstandings at the June 21 meeting.

In a statement, BHEC Executive Director Rebecca Dobrinski said the memorial would teach the universal lessons of the consequences of prejudice and hate. “That is the lesson of the Holocaust,” and one which ties into the nearby Civil Rights District.

In the days that followed, members of the Jewish community quietly reached out to members of the Council to answer questions, and the item passed unanimously on June 28.

In the days after the June 21 meeting, Tyson especially took umbrage at a column in the Birmingham News by John Archibald, accusing her of playing the race card and demeaning the Holocaust with the “dead is dead” comment, which was in the headline.

As a “retired, disabled veteran of the U.S. Army,” Tyson said she was “drilled to understand that we were not trained and deployed to take lives, but instead to protect life, and freedom, and justice.” With that, “when it is made to appear that I do not understand scope and tragedy of the Holocaust, I became angry” and felt a need to “set the record straight.”

She noted the Holocaust was “a man-made atrocity of unimaginable proportions,” but her question was about “how and why do we choose whom we memorialize, Shadow Lawn Memorial or the Holocaust Memorial?” She added, “I support both.”

Her intent is not to compare human suffering,” she said, but “here in America — and especially, the Deep South, both home to centuries of slavery and suffering, it remains a mystery to me why we do not publicly recognize our own sin of slavery in the same ways we seek to do for the actions of others.”

Shadow Lawn “is the final resting place of some who survived slavery, and others who struggled through Jim Crow and the regularity of terrorist bombings of homes and churches — dozens of which happened in this City alone,” she said. For years the city legal department has “shooed away” her requests for Shadow Lawn.

Because of that, “I will be clear: I support the use of public funds for the Holocaust memorial. However, I will only vote to allocate these funds when we are provided with clear guidance about the law pertaining to funding memorials,” she said.

Her response was given between the June 21 and June 28 meetings.

Scales did not respond to a request from SJL for comments.