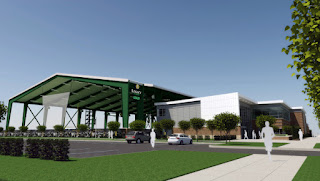 Two leaders in Birmingham’s Jewish community made large gifts toward the effort to revive football at the University of Alabama at Birmingham.

On June 28, the UAB Department of Athletics announced a $1 million commitment from Jimmy Filler, the largest gift to date, and on July 6 a $500,000 gift from Harold Ripps was announced.

The gifts are toward the Football Operations Center, a $22 million project that is to open before the 2017 season.

Filler and his wife Carol, along with Ripps, have been longtime supporters of UAB and are members of the Champion Club, a group who provides the philanthropic leadership within UAB Athletics. Filler also serves as an active member of the UAB Athletics Campaign Committee, while Ripps is on the campaign committee and the UAB Athletics Foundation board.

When the UAB administration shuttered the football program on Nov. 30, 2014, a day after the team became bowl-eligible for the second time in program history, Filler was a vocal critic of the decision. After tremendous public pressure, the decision was reversed on June 1, 2015, with the team returning for the 2017 season.

“Jimmy Filler’s loyalty and dedication to the Blazer family is exemplified by this unprecedented gift,” Director of Athletics Mark Ingram said. “We couldn’t be more grateful for his donation and his unwavering support of UAB Athletics, the university and the entire Birmingham community. Gifts such as this have made the vision of building the Football Operations Center become a reality.”

“We are grateful for the Fillers’ generous commitment that keeps this campaign’s momentum growing,” head coach Bill Clark said. “With increasing support throughout Birmingham and beyond, I am confident UAB Football is poised for unprecedented levels of success.”

“UAB is the leading entity that impacts the city of Birmingham,” Ripps said. “What benefits UAB will benefit Birmingham as a whole, and the success of UAB Football is definitely a major component in this city’s positive momentum. I want to see both UAB and Birmingham be successful and it takes investments like this and others to make it happen.”

“The amount of support we have received from UAB enthusiasts like Harold Ripps has been incredible,” Ingram said. “Harold is a valued member of the UAB family and we couldn’t be more appreciative of his generous donation. The Football Operations Center will elevate our program and Harold’s gift has been instrumental for this project.”

“The contribution made by Harold Ripps continues to show the incredible support we have received from individuals passionate about making a difference in Birmingham,” Clark said. “Gifts like this support the notion that the sky is the limit for UAB Football. Here is another statement that we intend to pursue excellence in everything we do on and off the field.”

Construction on the UAB Football Operations Center, which will house office space, meeting and film rooms, athletic training facilities, locker rooms and a weight room, is scheduled to begin later this summer in anticipation of opening prior to the start of the 2017 season.