One last packed house at Meir Chayim in McGehee 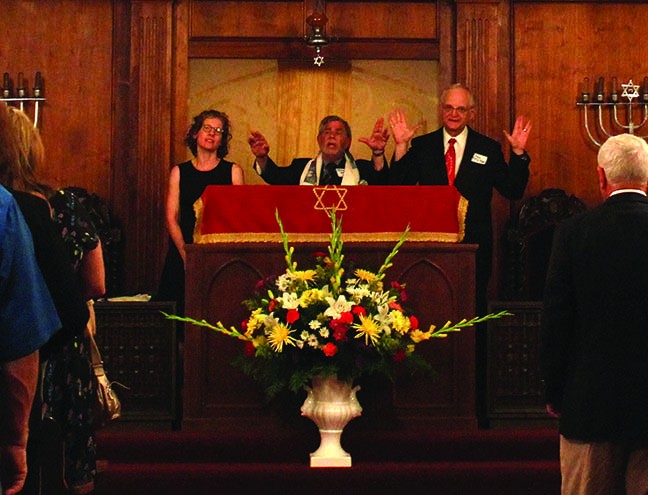 Congregation Meir Chayim may not have roots that extend all the way back to the 19th century, nor was it ever a particularly large congregation, but its absence will still be felt in southeast Arkansas. 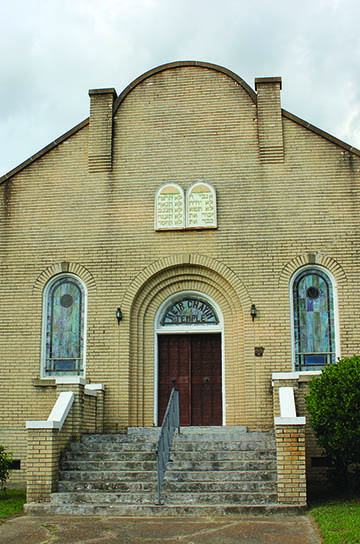 On June 17, the congregation that was founded in 1947 saw its 150-seat sanctuary in McGehee filled to overflowing for the final time as the building was officially deconsecrated.

As he did in Pine Bluff the week before, Rabbi Eugene Levy of Little Rock officiated the final service.

Meir Chayim served the Jewish communities of McGehee, Dumas and several other nearby towns. Plans for the congregation began in 1946, and the proposed name of Beth Chayim was changed almost immediately to Meir Chayim, the Hebrew name of Herbert Abowitz, who was killed in action in Italy during World War II.

The service began with sisters Betty Rae Green of Memphis and Irene Bisgier of New York lighting the Shabbat candles.

Rabbi Debra Kassoff of Jackson, who served the congregation during her days as the traveling rabbi at the Institute of Southern Jewish Life, introduced the recitation of the Shema with a reading that concluded, “on the merit of that declaration alone, we are blessed.” As she finished the sentence, a loud clap of thunder reverberated over the building.

Never large enough for a resident rabbi, Meir Chayim had a reputation in the Reform movement of being a training ground for great student rabbis. Levy said roughly 45 student rabbis had served the congregation through the years, delivering 15 to 20 sermons a year. “Rabbi Barry Kogan is going to read all of them tonight,” he said. 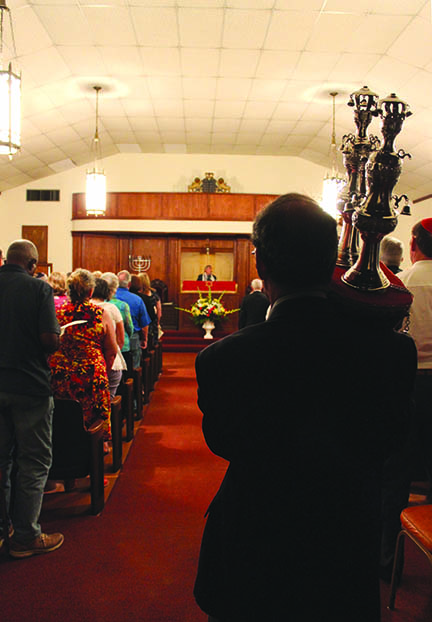 While most of the letters focused on the community’s hospitality and the difference the congregation had made in the lives of those rabbis, there were two anecdotes from Rabbi Daniel Allen, who would go on to become the head of ARZA, the Reform movement’s Zionist branch.

Allen was there for his first High Holy Days as a student rabbi when the 1973 Yom Kippur War broke out. Allen was from Nebraska and was a strong, outspoken Zionist — when the war started, his parents were in Israel, visiting his sister, who lived on a kibbutz.

When he came back to McGehee for Sukkot, with the war still raging, he urged the congregants to support United Jewish Appeal. “An older gentleman in the congregation, during my remarks, stood and said this was not a subject for discussion, and we are Americans.”

Part of the student rabbi’s duties on each visit was to meet with congregants at home or in their place of business, and when Allen visited with that person during that trip, they had a passionate but respectful discussion of their perspectives. “His kindness of style resonates with me to this day,” Allen related. The congregant then gave him a check for $25,000 to the UJA — “not a small sum in 1973” — and told him “not to reveal this matter.”

Allen also mentioned that unlike many in small-town Arkansas, he did not come from a retail background. He spoke of how Seymour Fleisig would open his store until all hours leading up to Christmas — and when Allen came to visit late one Saturday afternoon, “Seymour put me to work, often manning the cash register” so other employees could work with the customers.

He learned two lessons — that retail “is a hard business” and that “Seymour was an angel.” When he saw someone purchasing something for Christmas that they clearly could not afford, he instructed Allen on how to ring up the sale, with a price that was more affordable for that customer. It was truly a lesson on being a mensch, he related.

Susan Good of New Orleans, and Sally Wolff King of Atlanta, both from the Confirmation class of 1968, noted that their entire class was there for the final service, “which says something.”

Good spoke of the congregation’s connection with the Henry S. Jacobs Camp in Utica, giving a history of the camp’s formation as a summer haven for Jewish children from small communities around the South, and how each congregation in the region was asked to do a “fair share” toward the camp’s establishment.

“Many children from Southeast Arkansas benefited from these gifts,” Good said.

The Meir Chayim legacy will continue in that direction, as Naron presented David Bauman, president of B’nai Israel in Little Rock, with a check to establish a scholarship fund in Meir Chayim’s name, with the proceeds assisting Arkansas students in attending Jacobs Camp. 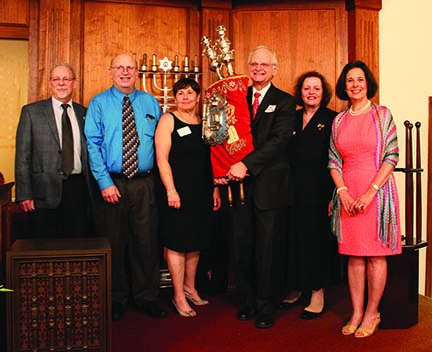 The entire 1968 Confirmation class returned for the final service

The funds came from the sale of the Meir Chayim building, and will be administered by B’nai Israel. Bauman thanked the McGehee congregation for entrusting B’nai Israel with the scholarship fund. “We will tend it with great care,” he said. He also “lovingly” accepted the memorial plaques, which will be displayed at B’nai Israel, and the McGehee names will be added to the yahrzeit lists there.

Many of the ritual items are going to Jacobs Camp and the Institute of Southern Jewish Life’s planned museum. Meir Chayim itself had originally been a repository of Judaica from closed congregations. A Ten Commandments tablet flanked by lions of Judah over the ark was from Temple B’nai Sholom of Bastrop, La., which closed in 1923 and was demolished in 1939.

The Ten Commandments on the front of the building came from the 1872 building of Temple Beth El Emeth in Camden, which closed in 1927.

Before the Kaddish, Rose Ann Naron read the entire Yahrzeit list, reciting almost 70 years of names for the final time in the building.

The Abowitz family then made a presentation to Naron to express appreciation for “every thing you have done to keep the Temple alive, above and beyond the years we thought it could survive.” Closing the congregation had been a topic of discussion for 20 years, and the community is now down to just three or four members.

After that presentation, the Torah was taken from the ark for the last time, with Levy carrying it through the congregation, passing it to Lester Pincus at the back of the room. Pincus then handed it to Richard Dattel, who accepted it on behalf of Hebrew Union Congregation in Greenville. Another Torah has been loaned to a Colorado congregation since 2005.

The Yahrzeit lights and eternal light were then switched off as Debbie Friedman’s “T’filat HaDerech,” “May we be blessed as we go on our way” was sung.

Kassoff, Levy and Kogan united on the bimah to recite the priestly benediction, and with the extinguishing of the yahrzeit candle, the ceremony ended — but the reunion was just beginning, as stories and anecdotes were swapped during a lengthy oneg.

Kogan’s prayer was that “each of us will go forth from this sanctuary fully cognizant of the blessings we have been given, and we will choose to share them and extend them to others… simply because we realize we have been called from the very beginning to be a blessing.”

He reflected that the evening was “the best kind of family reunion” though there was the sadness of closing the congregation. “The important thing is to take those wonderful memories with you and use them in our own homes, Temples and communities to reflect the best of what the people of Meir Chayim Temple gave us. It was truly God’s gift in partnership with our extended families.”