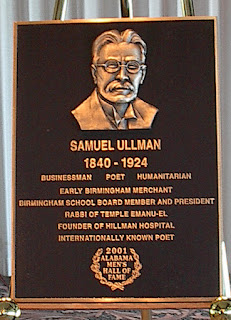 Editor’s Note: This piece was published in Deep South Jewish Voice, predecessor to Southern Jewish Life, in 2001. We are placing it on our site now because of increasing business ties between Israel and Japan.

Photo of the plaque inducting Samuel Ullman into the Alabama Men’s Hall of Fame in 2001.

A ceremony that took place in Birmingham on Jan. 11 will probably be felt more in Japan.

Seventy-seven years after the death of Birmingham civic leader Samuel Ullman, the odyssey of his poetry added another chapter with the release of four previously-unknown works.

Ullman, who served as lay rabbi at Temple Emanu-El in the 1890s, is one of Japan’s most beloved poets, because of the poem “Youth.” That poem was a favorite of Gen. Douglas MacArthur, who had it on his office wall in Japan after World War II. The poem’s simple spirit captivated the heart of a country that had been decimated physically and emotionally by the war, and is credited with being the spiritual inspiration for Japan’s post-war boom.

Despite his fame in Japan, he is virtually unknown in the United States, although the poem has made its way into many popular culture references.

The previously-unknown poems were discovered after the death of Ullman’s grandson, Mayer Newfield, last year. While his wife, Loretta, and daughter, Melanie Newfield Siegle of Houston, went through Newfield’s papers in his basement, they discovered the poems and turned them over to Margaret Armbrester, a University of Alabama at Birmingham assistant professor who wrote a biography of Ullman.

The find includes four that were never published and were likely written when Ullman was in his 80s. There are also early versions of previously-known poems, and the oldest-known version of “Youth,” with the working title “What is youth?”

Also found was an unsigned, undated charcoal drawing of Ullman, which Armbrester dates to the turn of the century.

Ullman was born in Germany in 1840. Fear of political upheaval drove the Ullmans to America in 1850, and they landed in New Orleans in 1851. They stopped in Port Gibson and helped form Gemiluth Chassed Congregation. Following the Civil War, in which Ullman was injured twice, he moved to Natchez and was instrumental in Temple B’nai Israel, and in its early adoption of the Reform movement.

In Natchez, he served on the Board of Visitors until he moved to Birmingham in 1884. He was immediately named to the city’s first Board of Education, of which he would serve as president from 1893 to 1900.

During the latter part of that term, he forcefully advocated the establishment of a high school for blacks, something which was unheard of not only in Alabama but in neighboring states. In 1900, Industrial High School opened.

But the Board of Aldermen were so enraged by Ullman’s passionate support for black opportunities that in 1900, they refused to reeelect him to the school board. Still, the Board of Education named a school for Ullman in 1901.

Over the decades following World War II, tens of thousands of copies of “Youth” were distributed by Japanese business leaders. The Youth Association in Tokyo has 1800 individual and 150 corporate members.

Scotty Colson, assistant to Mayor Bernard Kincaid, noted the pervasiveness of “Youth” in Japan today. In Birmingham’s Friendship City of Maebashi, the library dedicated the Samuel Ullman Wing, with a statue of Ullman and a collection of “Youth”-related items.

The Youth Associations still thrive, and are found in most cities. Colson remarked, “You’ll never see a member under 60 years of age.”

Both Colson and Armbrester acknowledge that Ullman’s poems are not to the caliber of Shakespeare, for example. The poems are appealing because of their simple, straightforward, optimistic message, Armbrester said.

Colson noted Ullman’s style is quite different from Japanese poets, whose works are “either very depressing or very sparse.”

The new poems, Armbrester said, show that even in Ullman’s last years of life, he still had a deep concern for the rights and well-being of others, and an optimistic outlook.

Starting around 1983, visiting delegations from Japan came to Birmingham to visit Ullman’s grave at the Temple Emanu-El Northside cemetery. Newfield would lead them on tours of the Ullman home, where Newfield grew up. In 1993, a group of Japanese businesses bought the house and gave it to UAB for a museum.

A Japanese translation of Ullman’s poems provides funds for scholarships at UAB.

“Youth” has been translated into dozens of languages. Recently, the museum acquired the first Hebrew translation. Ullman’s great-great-granddaughter Emily Mayer Siegle, a student at the University of Texas, had it translated by Esther Raizen, from Texas’ Center for Middle Eastern Studies. The copy of “N’urim” now hangs with the other translations in the museum.

At the Jan. 11 reception, there was also the viewing of the rough cut of “Youth: A Documentary.” Independent San Francisco filmmaker Judith Schaefer is looking for funding to hire a film editor to complete the documentary.