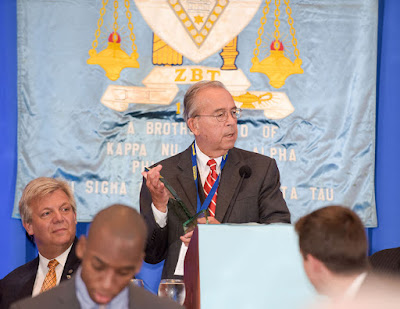 Robert Witt, chancellor of the University of Alabama System, was honored at the Zeta Beta Tau International Convention in Atlanta on July 23 with the Riegelman-Jacobs Award for Outstanding Interfraternal Service.

Earlier this year, during the University of Alabama ZBT chapter’s centennial celebration, Witt was made an honorary brother in ZBT, the world’s first Jewish fraternity.

From 2003 to 2012, Witt was president of the University of Alabama. During his nine-year tenure, he spearheaded an ambitious plan for academic growth and achievement that has positioned Alabama as one of America’s fastest-growing public universities.

He also put an emphasis on enlarging the Jewish enrollment at Alabama, and during his time as president the Alabama Hillel moved to a new facility next to a new Temple Emanu-El building on campus.

Under Witt’s guidance, the University of Alabama’s Greek community has doubled in size, becoming the largest community in the United States. He has championed housing reforms and diversity in organizations, among many efforts.

“I have known Bob Witt for over 10 years, and I am proud to call him my friend. As President of the University of Alabama, and then later as Chancellor, he was responsible for the entire Greek System having its greatest period of growth in numbers, influence and relevance. There was nothing he couldn’t help you accomplish,” said Zeta Beta Tau Foundation President Bruce H. Weinstein, a 1970 alumnus of Alabama ZBT. “In particular for ZBT, he oversaw and spearheaded increasing Jewish enrollment, which was directly responsible for Psi Chapter doubling its size to over 100 brothers. He was recently made an honorary ZBT, and there is no one more deserving of this award than our new brother.”

“Zeta Beta Tau is glad to have Dr. Robert Witt, a long-time advocate for diversity and academic achievement, be a part of our Brotherhood,” said International President Matthew J. Rubins, Kappa (Cornell University) ’90. “He has promoted the mission of ZBT throughout his career. We are grateful for his service to ZBT and to the Fraternity community at large.”

“It is a great honor to be selected to receive the Riegelman-Jacobs Award and to be named an honorary brother of ZBT. I am proud of the leadership, service and many contributions of our country’s Greek organizations and particularly proud to be affiliated with ZBT at The University of Alabama,” Witt said.