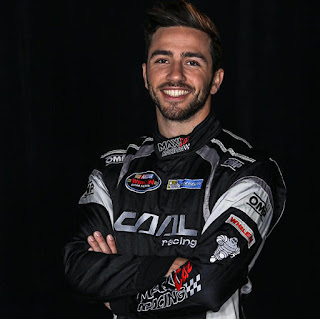 For the first time, an Israeli driver will take the wheel at a NASCAR Xfinity Series race this weekend, and a Florida attorney hopes it will be inspiring for the Jewish community.

With a boost from Sarasota’s David Levin — and indirect assistance from Duck Dynasty — Alon Day will be in the No. 40 Dodge on Aug. 13 at the Mid-Ohio Sports Course. (Update: He qualified 22nd out of 40 on Aug. 12). The race will begin at 2:30 p.m. Central and will be televised on USA Network.

An environmental and waterfront property attorney, Levin is a “huge football fan,” as is his wife. She has also been a long-time NASCAR fan, and about 12 years ago when he was looking for something to follow after football season ended, she suggested he try NASCAR.

He noticed an “absence of Jewish participation behind the wheel” and was looking for a way to rectify that in a sport with a fan base that is seen as overwhelmingly Christian.

In early April, he was watching the broadcast of a race at the Texas Motor Speedway, and saw Duck Dynasty’s Phil Robertson give the invocation, which included a prayer “that we put a Jesus man in the White House.”

Levin said that prayer “was a kick in the butt.” Many who give invocations understand the audience is diverse and do non-denominational prayers, he said. “Those that don’t, you just accept that. I thought that one was a little over the top.”

At Talladega on April 30, he sponsored a car in the Xfinity series, which is one step lower than the Sprint Cup series. The Florida Waterfront Law car was driven by Johnny Jackson.

The Xfinity series is a mixture of newcomers and experienced drivers trying to make the Cup series, but some Cup drivers also choose to compete there.

While there, Levin reached out to the team owner, “that if he would find a qualified Jewish driver I was certain there would be plenty of corporate support for him.”

It would also attract interest from the Jewish community. “Even my mom would tune in to watch that,” he said.

Shortly after that discussion, NASCAR named its NASCAR NEXT participants, with Alon Day as one of the 11 selected drivers. The program identifies and develops up-and-coming drivers.

A few weeks later, Levin met and interviewed Day in Charlotte. “He was such an impressive personality,” he said.

A native of Ashdod, Day began as a Go Kart racer as a teenager, finishing second in the Israel Karting Championship. He then set off for Europe, competing in the Asian Formula Renault Challenge and the German Formula Three Championship, where he placed in the top 10 in both of his seasons.

He came to America to race briefly in Indy Lights, then returned to Europe and started racing in the FIA GT series in 2013.

In 2015 he started racing stock cars in the Whelen Euro Series. Despite having to learn about stock cars, he finished second in the series and won the Junior “Jerome Sarran” Trophy as rookie of the year. Over the last two seasons, he won five races in the European series.

They have identified seven Xfinity races as a plan for the fall. The first two are road tracks — this weekend in Ohio, and Aug. 27 at Road America in Wisconsin.

After the first two, NASCAR will assess his results and determine if he can go on to other races.

“After his successful fall debut, our plan is to have him run a full season in 2017,” Levin said. By limiting him to seven races this year, he would still be regarded as a rookie next year.

But the first, biggest hurdle is financing. He pulled $60,000 from his retirement account to guarantee Day’s first two races and has been looking for sponsors to ensure the other five.

Unlike basketball or football, where the team pays the athlete, in racing, the driver secures a spot behind the wheel by paying the team through the sponsorships they get on their own. And fielding a competitive car “is incredibly expensive.”

Levin said it has been a “hugely uphill battle” convincing the many Jewish-owned companies he has contacted to sponsor something they have “never seen on their marketing radar.”

He said there is a perception that NASCAR is “solely a Southern, Christian redneck sport,” and aren’t aware of the fans’ demographics. Studies have shown that NASCAR fans are the most fiercely loyal to sponsors, much more than football, basketball or other sports. Also, he point to television ratings in New York, Chicago and Los Angeles, which are three of the top five markets for NASCAR broadcasts.

He is promoting the “unique” opportunity to capitalize on what would undoubtedly be a human interest story. “There will be a lot of attention focused on Alon.”

And there isn’t a lack of Jewish fans for NASCAR. A Jewish law professor who is a NASCAR fan recently called Levin to thank him for his efforts.

Levin hopes publicity about Day’s first races will help lead to sponsorships, or “his racing career will be very short-lived.”

Day can become a sports role model for Jewish children, Levin added, and the Jewish community needs to step up and support Day. He has also set up a GoFundMe page.

Another angle for gaining support is through evangelical Christians who are NASCAR fans and passionate about Israel. Levin said he is just starting to learn about that.

While many national journalists covering NASCAR are Jewish, Birmingham’s Rabbi Barry Altmark was a photojournalist covering NASCAR for five years and Birmingham’s Eli Gold was the long-time voice of NASCAR before parting ways with the Motor Racing Network this spring, there have been very few Jews on the track.

Denning reportedly had to deal with crew members who insulted Jews and minorities, and others who tried to convert him to Christianity.

In 2012, he was inducted into the National Jewish Sports Hall of Fame as the only member of the Auto Racing category.

Overseas, there have been a few Jewish drivers of note. The legendary Sir Stirling Moss of Britain, regarded by many as the greatest all-around racing driver of all time, had a “partially” Jewish father and he was bullied for it in school.