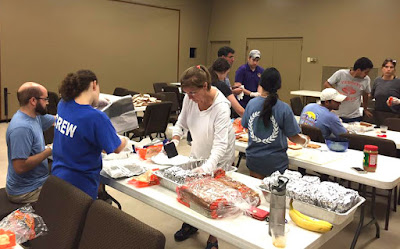 Relief efforts are underway following the historic flooding in Baton Rouge and central Louisiana, and the Jewish community is working to assess the situation and provide aid.

Parts of the region received up to two feet of rain in two days from a tropical system that parked itself over the state, inundating rivers and streams and causing widespread flooding. At least five people have been killed and there have been thousands of water rescues.

In Baton Rouge, Governor John Bel Edwards and his family had to evacuate a flooded Governor’s Mansion, and the Louisiana State University campus flooded. For a time, all major roads west of New Orleans to Baton Rouge were closed by flooding, including a 60-mile stretch of Interstate 12 from Covington to Baton Rouge.

The Baton Rouge Jewish community numbers between 1,600 and 2,000, with two synagogues and a relatively-new Chabad presence. None of the Jewish institutions have been damaged, but both synagogues are compiling lists of members who have been affected by the flooding.

Rabbi Peretz Kazen from Chabad of Baton Rouge said there are some in the Jewish community who “have lost everything,” while others have been “going through a lot waiting in their homes, surrounded by water.”

They are reaching out to community members to assess needs and offer assistance with food, temporary living quarters and other arrangements. A Go Fund Me page has been set up to “give them a little relief to get them on their feet.”

Beth Shalom Synagogue, which is not far from areas that were severely flooded, cancelled Tisha B’Av services on Aug. 13. The next day, members were working at Celtic Studios, a large film facility that has been turned into an emergency shelter.

Today, volunteers are filling the Beth Shalom kitchen to make meals for those taking refuge at the studio. They also brought jambalaya to a shelter at St. John’s United Methodist Church and are collecting “desperately needed baby supplies.”

The congregation “will continue our efforts as long as we can. We are also thinking about how we can help families that will need to rebuild.”

Beth Shalom has launched a Tisha B’Av 2016 Flood Relief Fund, which will go toward the congregation’s flood relief efforts, assisting congregants whose homes were flooded, and to pay their Rayner Learning Center staff while the school is closed and assist Rayner staff members whose homes flooded. Besides the online effort, checks can be sent to the congregation, at 9111 Jefferson Highway, Baton Rouge LA 70809.

After Hurricane Katrina hit 11 years ago, Baton Rouge was a coordination point for the evacuated New Orleans Jewish community. When Hurricane Rita hit shortly after Katrina in 2005, Beth Shalom in Baton Rouge suffered roof damage that flooded the building.

The New Orleans Federation said in a statement to the community that it is making a special allocation toward the Baton Rouge relief effort. “This is just the first step in many we will take to aid our neighbors in south Louisiana — just as they helped us in 2005.”

The New Orleans Federation is collecting gift cards to Rouses, Winn-Dixie, Walmart, Target, Home Depot, Lowe’s, Office Depot, Petsmart and Petco, which will be distributed by the Baton Rouge Federation to those who need them the most. Cards can be dropped off at the Jewish Community Campus in Metairie.

The New Orleans Federation is also recruiting New Orleanians who navigated through the post-Katrina bureaucracy to lend emotional support and advice to those in Baton Rouge, especially in dealing with insurance companies, paperwork and reconstruction.

Minnesota-based NECHAMA Jewish Response to Disaster is on the ground in Baton Rouge. The first step was assisting the Greater Baton Rouge Food Bank, which serves 25,000 meals daily and lost 120,000 pounds of food to the flood. In a post, NECHAMA said it is “vitally important that they get back online and fast.”

NECHAMA is also assessing household needs and securing a base of operations. They are looking for volunteers to help with clean-up in Baton Rouge, but volunteers need to register on the NECHAMA website.

JNOLA, the Federation’s young adult group, will send a delegation of volunteers this weekend, meeting in Baton Rouge on Aug. 20 at 10 a.m. There is also a JNOLA Happy Hour for Baton Rouge gift card drive, Aug. 18 from 5:30 to 7:30 p.m. at Tracey’s Original Irish Channel Bar.

The Jewish Endowment Foundation of Louisiana is encouraging those with donor-advised funds to make allocations to the Baton Rouge Federation.

Starting on Aug. 22, the Jewish Community Day School in Metairie will be holding a clothing, food, toys and tzedakah drive. Collection boxes will be in the Metairie JCC lobby.

Temple Sinai in New Orleans will have volunteers helping send supplies, meeting at the Wal-Mart on Tchoupitoulas Street on Aug. 20 from 1 to 3 p.m.

Chabad of Baton Rouge will have a community Shabbat dinner, open to all regardless of affiliation or observance level, on Aug. 19 at 7:15 p.m. Reservations can be made here.