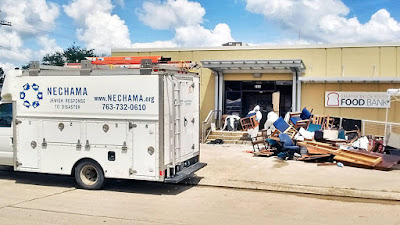 Thirty Jewish families in the Baton Rouge area are known to have been displaced or experienced severe damage to their homes after this week’s floods in central Louisiana, according to the Jewish Federation of Greater New Orleans.

Described by FEMA Administrator Chris Fugate as “a hurricane with no wind,” the storm dropped as much as 26 inches of rain on an already-saturated area this past weekend. So far, there have been 13 confirmed deaths and 20 parishes were declared Federal disaster areas.

The Red Cross said this was the worst natural disaster since Hurricane Sandy hit the East Coast in 2012. At least 40,000 homes have been damaged, and over 80,000 have already registered for assistance from FEMA.

The Baton Rouge Jewish community numbers between 1,600 and 2,000, with two synagogues and a Chabad presence. While the Jewish institutions were not damaged, many congregants suffered losses.

Mark Hausmann, president of Beth Shalom in Baton Rouge, said “We are still in needs assessment mode, but most of the needs appear to be financial and manpower.”

The synagogues, Baton Rouge and New Orleans Federations and Union for Reform Judaism representatives met on Aug. 19 to coordinate efforts. Both Baton Rouge synagogues are Reform. Ellen Sager, director of the Baton Rouge Federation, is among those with “significant” flood damage to their homes.

The Jewish Federations of North America launched an online relief appeal, with 100 percent of donations going to the Baton Rouge Flood Relief Fund to support the Jewish Federation of Greater Baton Rouge “as they meet urgent needs.” Originally, both congregations set up their own relief funds, but at the Aug. 19 meeting it was agreed that the Federation site should be “the primary intake of donations for distribution to those in the Jewish community that have been affected by the flood.”

The New Orleans Federation has made an allocation of $25,000 to the relief effort, and the Jewish Endowment Foundation of Louisiana has made a $10,000 grant from its general fund. JEF is also encouraging those with donor-advised funds to make allocations to the Baton Rouge Federation.

The New Orleans Federation is collecting gift cards to Rouses, Winn-Dixie, Walmart, Target, Home Depot, Lowe’s, Office Depot, Petsmart and Petco, which will be distributed by the Baton Rouge Federation to those who need them the most. Cards can be dropped off at the Jewish Community Campus in Metairie.

The New Orleans Federation is also recruiting New Orleanians who navigated through the post-Katrina bureaucracy to lend emotional support and advice to those in Baton Rouge, especially in dealing with insurance companies, paperwork and reconstruction.

Minnesota-based NECHAMA Jewish Response to Disaster is on the ground in Baton Rouge. After helping the Greater Baton Rouge Food Bank, the group started working on removing flooded items from homes and starting the rebuilding process.

Volunteers are needed, but need to coordinate by registering at the NECHAMA website.

JNOLA, the Federation’s young adult group, will send a delegation of volunteers this weekend, meeting in Baton Rouge on Aug. 20 at 10 a.m.

Rabbi Peretz Kazen from Chabad of Baton Rouge said there are some in the Jewish community who “have lost everything.”

They are reaching out to community members to assess needs and offer assistance with food, temporary living quarters and other arrangements. A Go Fund Me page has been set up to “give them a little relief to get them on their feet.”

His wife, Mushka, was a teen living in New Orleans when Katrina came in 2005. In the weeks that followed, her parents, Rabbi Zelig and Bluma Rivkin, played a large role in the recovery, and were recognized by President George Bush for their efforts.

When the Kazens’ expected Shabbat guests started cancelling last week because of the weather, they decided to head to New Orleans for Shabbat and Tisha B’Av, then headed back to Baton Rouge to help after seeing the extent of the disaster.

Members of Beth Shalom Synagogue have been working all week, opening their kitchen to make meals for those who are in shelters and for the emergency operations center. They reported 12 congregants and six staff members had flood damage, and this week many members were in the home of Vicki Ferstel, clearing out flooded walls, flooring and furniture.

Before the efforts were combined into the Federation fund drive, Beth Shalom had a Tisha B’Av 2016 Flood Relief Fund, which will go toward the congregation’s flood relief efforts, assisting congregants whose homes were flooded, and to pay their Rayner Learning Center staff while the school is closed and assist Rayner staff members whose homes flooded. B’nai Israel, which also had numerous congregants with flood damage, also had an online fund set up.

Jessica Yellin, religious school director at B’nai Israel, said “Many have lost everything and didn’t have flood insurance. Even those with insurance are displaced and without transportation.”

After Hurricane Katrina hit 11 years ago, Baton Rouge was a coordination point for the evacuated New Orleans Jewish community. When Hurricane Rita hit shortly after Katrina in 2005, Beth Shalom in Baton Rouge suffered roof damage that flooded the building.

Anna Blumenfeld Herman and Nadav Herman of the Henry S. Jacobs Camp in Utica arrived with a flatbed trailer filled with essentials for cleaning out flooded buildings and got to work with the other volunteers.

Starting on Aug. 22, the Jewish Community Day School in Metairie will be holding a clothing, food, toys and tzedakah drive. Collection boxes will be in the Metairie JCC lobby.

Temple Sinai in New Orleans will have volunteers helping send supplies, meeting at the Wal-Mart on Tchoupitoulas Street on Aug. 20 from 1 to 3 p.m.

Beth Israel in Gulfport, which had to completely rebuild after Katrina, is sending $500 each to both of the Baton Rouge congregations and collecting funds at its membership meeting on Aug. 21.

Chabad of Baton Rouge will have a community Shabbat dinner, open to all regardless of affiliation or observance level, on Aug. 19 at 7:15 p.m.

Beth Shalom will have a musical Shabbat service on Aug. 19 at 7 p.m. “as we raise our voice in both praise and the healing power of prayer.” Newly-arrived Rabbi Natan Trief and musician Nick May will lead the service, which will be followed by an oneg sponsored by the Posner family “in honor of the valiant effort of so many people in our community this week and all the work ahead of us.”