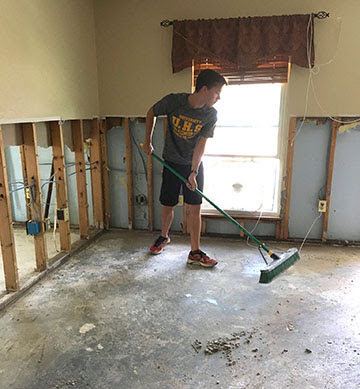 Above: Max Levy helps clean at the home of a Beth Shalom congregant in Baton Rouge, as the recovery process begins from this week’s floods.

Thirty Jewish families in the Baton Rouge area have been displaced or experienced serious losses from this week’s flooding. NECHAMA is on the ground, volunteers are needed and relief funds have been set up. Our ongoing coverage of the situation is here.

Chabad in Baton Rouge will have a community support Shabbat dinner on Aug. 19 at 7:15 p.m.

Ross Nichols, who leads Hebrew Roots classes at the Temple Sinai building in St. Francisville, wrote “Louisiana Laments on the 9th of Av.” His sister lost her house to the floods.

A participant in Dream Street at Jacobs Camp who has severe cerebral palsy lost her power wheelchair and lift van in the Baton Rouge flood. A GoFundMe page has been set up for her.

On Aug. 29, “Filming the Camps,” an exhibit about Hollywood filmmakers who were tasked with filming evidence in Nazi concentration camps in 1945, opens at the History Museum of Mobile.

A high school student in the Houston area takes on his school’s lack of response to anti-Israel vandalism, harassment and intimidation, taking the fight to the school district.

An umbrella group representing hundreds of black churches in Missouri rejects “without hesitation” the anti-Israel sections of the Black Lives Matter platform.

A native of Clinton, Miss., whose father converted to Judaism at Beth Israel in New Orleans, writes about Southern Golems, the fragile battle for Jewish identity in the South, especially in New Orleans, and the post-Katrina rebirth of Beth Israel.

St. Louis is jumping on the bandwagon with its first Kosher Barbecue Contest, Sept. 11 at Nusach Hari B’nai Zion. It has already been officially sanctioned by the Kansas City Barbecue Association.

The Birmingham Holocaust Education Center will honor Betty Goldstein at its L’Chaim Gala on Aug. 21 at 2:30 p.m. at the Alys Stephens Center.

Birmingham’s Temple Emanu-El will have a special Shabbat service on Aug. 26 at 5:40 p.m. to debut “The Klezmer Shabbat Service,” an original composition that was commissioned to honor Ruth and Marvin Engel, and as a tribute to Birmingham’s Jewish community.

Birmingham’s Levite Jewish Community Center will host a Back to School JCC Maccabi Kickoff for Community Youth Group, and to promote participation in the 2017 Maccabi Games being hosted in Birmingham. There will be food and games, including slip-and-slide kickball. The kickoff will be Aug. 21 at 5:30 p.m.

Thus far, 100 families have signed up to house athletes during the 2017 Maccabi Games. To sign up, contact Beth Lovett at the LJCC. Athletes must be in a household with at least one Jewish member.

Auburn Hillel will have a welcome-back Bagel Brunch on Aug. 21 at 1 p.m. at Beth Shalom.

Chabad at the University of Alabama will have a Welcome Back Shabbat on Aug. 19 at 7:30 p.m. with services and a four-course meal.

The Bloom Hillel at the University of Alabama will have a Fiesta Shabbat with dinner from Taco Mama, Aug. 19 at 5:30 p.m. A Welcome Back BBQ will be on Aug. 21 starting at noon, with barbecue chicken, music by the Voodoo Saints and snow cones.

The University of Alabama will hold Explore Better Together, Aug. 22 at 6 p.m. at Ferguson Great Hall. Sponsored by UA Crossroads, the event is to learn about different religious and secular beliefs on campus.

The Mobile Jewish community will welcome new Shlicha Ofir Rozenberg on Aug. 19 at 6:30 p.m. at the Mobile airport, barring flight delays. The date has changed from what was announced last week.

Birmingham’s Temple Beth-El will have Sushi Shabbat on Aug. 19, following the 5:45 p.m. service. Music will be by acoustic artist Max Klapow, and dinner will be catered by Sushi Village.

Birmingham’s Temple Emanu-El begins its annual ReJewvenation class on Aug. 25 at 7 p.m. at the Levite Jewish Community Center. Led by Rabbi Jonathan Miller, the class is for Jews and non-Jews who want to learn about the major ideas which motivate Judaism. Registration is free and can be made to Anita Winslett at Emanu-El, (205) 933-8037 ext. 230.

Birmingham’s Levite Jewish Community Center will have a Hawaiian luau-themed mixed doubles tennis tournament on Aug. 21. The first 12 men and 12 women to sign up will be entered in the tournament. Players will be randomly paired with different partners in seven five-game mini sets, from 2 to 5 p.m. Hawaiian attire is strongly encouraged and free refreshments will be served. The cost to register is $18 for members and $20 for non-members. Register here or call (205) 879-0411.

Birmingham’s Bais Ariel Chabad Center is holding a new six-week Jewish Learning Institute course, “Strength and Struggle: Lessons in Character from the Stories of Our Prophets.” The course started on Aug. 17 at 7 p.m., running for six Wednesday nights. There is also a Thursday option at 11:30 a.m. starting Aug. 18. The course uses Biblical characters as inspiration in overcoming struggles and becoming stronger from them. Gaining perspective through emotion, beating burnout and breaking out of routines are among the topics to be explored. To register, call (205) 253-4408. There is no charge or obligation for those who want to sample the first session.

Beth Shalom in Fort Walton Beach will have an oneg meet and greet with Yonatan Greenberg, their new visiting rabbi, on Aug. 26 following the 6:30 p.m. service.

Moishe House will have a housewarming for its new location in New Orleans, Aug. 27 from 5 to 9 p.m. Instead of housewarming gifts, bring items to donate to Baton Rouge flood relief.

There will be an Interfaith Prayer for Peace and Healing service on Aug. 23 at 7 p.m. at St. Louis Cathedral in New Orleans.

Alan Smason announced that the second Kosher Red Beans and Rice Cookoff scheduled for Sept. 5 at Torah Academy in Metairie is being postponed to next year.

Chabad Jewish Center in Metairie will have a community Shabbat dinner on Aug. 26 at 8 p.m. Reservations are required, $15 for adults and $8 for ages 3 to 12 with a family maximum of $50. Reservation deadline is Aug. 23.

The next Jewish Babies Club at the Jewish Community Day School in Metairie will be on Aug. 26 at 11 a.m.

Chabad in Metairie will have a Hebrew language crash course this month, with the goal of enabling participants to read Hebrew by the High Holy Days. The course will be led by Rabbi Mendel Ceitlin on six Tuesdays at 7:30 p.m., starting Aug. 23. It is geared toward those who are currently unable to read Hebrew, as well as those who would like to improve their fluency. The course fee, including the textbooks, is $60. Registration is available here.

JNOLA and Moishe House will have Expedition Jew Orleans, a Jewish New Orleans bus tour, led by Julie Schwartz. There will be breakfast at 9:30 a.m. on Aug. 21 at Audubon Park, followed by the tour from 10 a.m. to 1 p.m. Cost is $10 and reservations are due by Aug. 15.

Rabbi Peretz Kazen is leading a series of weekly learning experiences about contemporary issues at Chabad in Baton Rouge. The Jewish Learning Institute series began on July 26 with ‘Once Upon a Rabbi: An Overview of Rabbinic Ordination.” Upcoming topics are “Better Than Perfect: When the Righteous Fail” on Aug. 23, and “Beware of Blood: What’s so Bad about Animals’ Blood?” on Aug. 30. Registration is required and can be done on the Chabad website. Classes are free but there is a required textbook, which is $18.

Mind Matters at the Uptown Jewish Community Center in New Orleans is enrolling for the fall. The group is designed specifically for those concerned about their memory. In this boot camp for the mind, participants will discover techniques to improve memory, participate in stimulating discussions and learn from others undergoing similar challenges. It runs from Sept. 13 to Dec. 6, Tuesdays from 10 a.m. to 2 p.m. For more information or to register, contact Allison Freeman, Mind Matters Director, at (504) 897-0143.

Jewish Community Day School in Metairie has a unique opportunity for its upcoming 2016-2017 school year. Through a generous donor’s contribution, one 2nd grader and one Kindergartner will each receive a 50 percent tuition discount. Eligibility is restricted to any child new to the school, entering Kindergarten or Second Grade, with synagogue membership. Email to learn more.

Beth Israel in Gulfport will welcome former CNN Middle East correspondent and Israel Television reporter Linda Scherzer for a general membership meeting, Aug. 21 at 6 p.m. For the last 10 years, Scherzer has been director of a program called “Write On For Israel,” which trains a select group of distinguished high school students how to become defenders of Israel when they get to college. Linda is also a media and public relations consultant and advises the Jewish community on how to engage in constructive dialogue with the press.