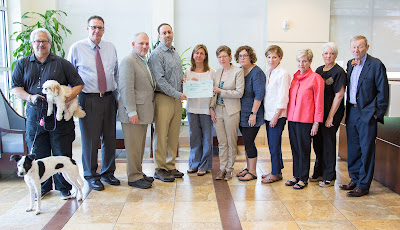 Recovery continues in the Baton Rouge area following the historic flooding that hit two weeks ago when a stalled storm system dumped as much as three feet of rain in two days.

They also presented a check for $112,000, the first installment of the Federation’s national flood relief campaign. The campaign has raised about $200,000, but estimates of the need just in the Jewish community are much higher.

In urging support for Baton Rouge, Hadassah noted that Hadassah Baton Rouge President Marilyn Martell was among those displaced by the flooding.

On Aug. 24, IsraAid announced it is sending an eight-person humanitarian delegation from Israel to help with the relief efforts. IsraAid was on the ground in Louisiana in 2005 following Hurricane Katrina.

NECHAMA, which has been on the ground in central Louisiana since just after the flooding, has secured volunteer housing and is coordinating volunteer efforts to “muck and gut” houses, the first step in preparing them for rebuilding.

Last weekend, JNOLA brought a delegation of 15 volunteers from New Orleans to pitch in, the group will be back on Aug. 27.

About 30 Jewish homes were flooded out, and there are estimates of up to 110,000 damaged homes in the region. A large percentage did not have flood insurance because they were not in a flood plain.

A lot of cars were also destroyed by the flooding, and many of those whose homes did not flood have been affected by places of employment being closed.

Rabbi Natan Trief, who just began as rabbi at Beth Shalom in Baton Rouge, said “Street after street resembled a war zone, as every house vomited out all of its possessions and building materials to the curb. We hauled out tons of clothing, water-logged mattresses, refrigerators, televisions, and countless, ruined photographs.” 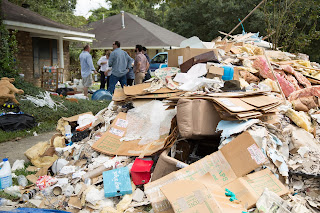 At several houses, they found “soaked prayer books and other pieces of Jewish literature that we brought to the synagogue for proper disposal.”

Anna Blumenfeld Herman, director of the Henry S. Jacobs Camp in Utica, is spending two weeks in Baton Rouge to help coordinate the Jewish community response — and check in on Jacobs campers.

In a Facebook post, Beth Morrison said “Camp friends are forever friends, and they’re clearly always there when you need them. They helped me pack and move things and took my flood-damaged Tanach back to HSJ to be buried.”

“Baton Rouge still finds herself in dire straits and is in urgent need of monetary and labor support,” Trief said. “Along with this support, Baton Rouge’s unity, grit, and determination will ultimately enable the city to recover and to heal.”