Inge Auerbacher to tell her survival story at North Alabama 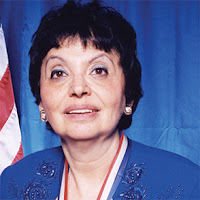 Inge Auerbacher, the only child survivor from the State of Wuerttemberg who was deported to the concentration camps, will speak at the University of North Alabama in Florence as part of the Distinguished Events series.

Auerbacher was 3 years old during Kristallnacht and spent three years in Terezin, from 1942 to 1945. Despite her father earning the Iron Cross in World War I, he was deported to Dachau. In all, at least 13 members of her immediate family and many distant relatives were killed during the Holocaust.

After the Holocaust, she came to the United States with her parents and battled tuberculosis for many years. She later earned a degree in chemistry, working for 38 years with many renowned researchers.

She is the author of six books, ranging from the Holocaust to the discovery of streptomycin. Many of her poems have been published and set to music.

She will give two presentations, “Memories of a Child Survivor of the Holocaust,” on Sept. 15. The first, at 9 a.m., will be mainly for college, high school and middle school students. The second presentation will be at 7 p.m., and will be preceded by the UNA Collegiate Singers performing Auerbacher’s “Who Am I.”

Both talks will be at the Norton Auditorium. Admission is free and no tickets are required.

At 6 p.m. on Sept. 15, there will be a pre-conference lecture, “Understanding the Holocaust,” by Jeffrey Bibbee, chair of the UNA History Department, in the GUC Loft.

Auerbacher will also speak following the 7 p.m. Shabbat service at B’nai Israel in Florence on Sept. 16. On Sept. 17 at 4 p.m., she will give a talk with a slide show at B’nai Israel.

Before her visit, there will be a display at the Collier Library, presented by the Birmingham Holocaust Education Center, from Sept. 12 to 14.