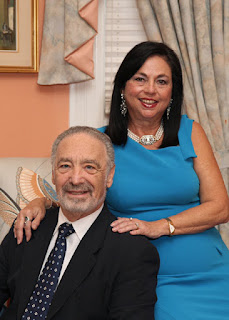 In 1966, the New Orleans Section of the National Council of Jewish Women started presenting the Hannah G. Solomon Award each year to “a community leader who exemplifies the qualities of Hannah G. Solomon, founder of NCJW.”

That was the same year that this year’s honorees, Ana and Juan Gershanik, left Argentina to make a new life in the United States.

The awards lunch will be on Sept. 26 at the Westin New Orleans Canal Place, with a cash bar opening at 11:30 a.m. and lunch at noon.

The Gershaniks arrived in Miami as newlyweds in June 1966, prepared to spend a year there so Juan could do an internship in pediatrics. Two weeks later, a military coup ousted Arturo Illia, “the most honest president that Argentina ever had… and things started going down the hill,” Ana said.

Friends and colleagues urged them to stay in the U.S., so after the year in Miami they moved to Lexington, Ky., to do a two-year residency and specialize in neonatology.
Ana revalidated a teaching degree and taught at a Catholic school near Miami, then in Lexington.

In 1969 they moved to Charleston, S.C. so he could do a two-year fellowship in neonatology, and she became the first female teacher at a prestigious private high school for boys and enrolled at The Citadel to pursue a Master’s in education.

In 1971, Juan was hired as a professor at Louisiana State University Medical School in Shreveport, where he developed the first Neonatal Intensive Care Unit in the state. In 1979, he was recruited by Southern Baptist Hospital in New Orleans to develop a similar unit there.

While in Shreveport, Ana started volunteering with the Shreveport Symphony and as a piano teacher, doing music education for Caddo Parish schools. She also joined NCJW at that time “and gained better skills as a volunteer through this wonderful organization where I was able to develop more knowledge and awareness in various areas of social justice.”

Shortly after moving to New Orleans, Juan became involved with the Hispanic programs of the Council on Alcohol and Drug Abuse. “I realized the importance of the prevention efforts specially at the high school level, as well as the need for services to the growing Latino community,” he said.

Ana noted that when she was teaching in Charleston, it was during a time of desegregation “when there was much differential treatment of black children.” In Shreveport she also saw discrimination against Asians and Latinos, and “a lot needed to be done.”

More recently, she has found it “equally rewarding to help the Latino students in the schools to succeed in their studies and to lead healthy lives staying away from dangers like drugs, smoking and peer pressure.”

Juan also finds it rewarding in “teaching underprivileged children about the great opportunities that they have in this country, building their self-esteem, and their desire to succeed in life and ‘be happy’.”