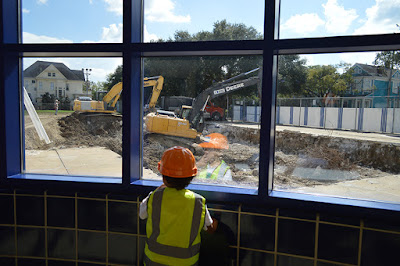 Demolition has begun in the area where the New Orleans JCC’s new aquatics complex will be.

The New Orleans Jewish Community Center Capital Campaign received a major boost with the announcement of a $2 million commitment from the Goldring Family Foundation and the Woldenberg Foundation.

The JCC is conducting an $8.5 million campaign to fund a major expansion and renovation of its Uptown facility. With this gift, the fitness area will be known as the Goldring Woldenberg Sports and Wellness Complex.

The 14,000 square foot addition will significantly expand the current Goldring Fitness Center. With its separate entrance on Leontine Street, the sports and wellness complex will include a new indoor teaching/therapy pool on the first floor and expanded snack bar.

The second floor will have a 2,500 square foot cardiovascular space and an enlarged personal and small group training studio. The new third floor will house a suite of fitness studios including indoor cycling, yoga, Pilates and group exercise.

“We could not be more grateful to the Goldring family and the board members of the Goldring Family Foundation and the Woldenberg Foundation for their support of this campaign and their ongoing commitment to the future of the New Orleans Jewish Community Center,” said JCC Executive Director Leslie Fischman.

A formal groundbreaking for the expansion is expected in the next couple of months, with the conclusion of road work on Jefferson Avenue. This is the 50th anniversary of the current JCC building, which is on the site of the former Jewish Children’s Home.

Last year, a $1.5 million gift from the Oscar Tolmas Charitable Foundation was announced, and the new aquatics center will be named for Tolmas.

The complex will have two outdoor pools — a 25-meter, 6-lane lap pool, and a family recreational pool with water features. There will be new men’s, women’s and family locker rooms.

The overall project also includes two new preschool classrooms and a dedicated entrance for the school.

The campaign currently stands at $7.5 million and is ongoing.